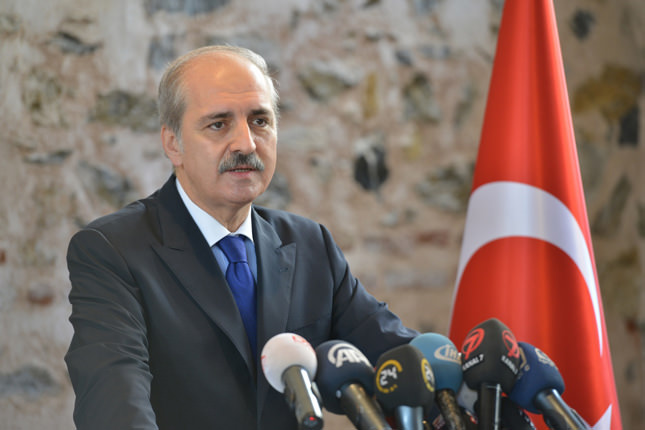 by Daily Sabah with AA Jun 11, 2015 12:00 am
Turkey's deputy prime minister on Wednesday called for vigilance against provocation following the murder of a Kurdish political figure.

Deputy PM Numan Kurtulmus asked political parties to behave "sensitively and vigilantly" as he visited a refugee camp in the southeastern province of Sanliurfa.

Aytac Baran, the head of an aid group linked to the Islamist Huda Par party, was shot dead as he left his office in Diyarbakir - the southeastern city seen by Kurds as their de facto capital - on Tuesday. His killing sparked violence that led to another three deaths in the province. Seventeen people have been arrested in connection with the clashes.

Kurtulmus said it was a "responsibility for all of us" to guard against provocations, stressing the pro-Kurdish Peoples' Democratic Party's position in this regard as the party that gathered most votes in the southeast.

Baran was shot dead outside his office on Tuesday. Soon after, HÜDA-PAR supporters convened outside the office to protest the killing. The assassination was blamed on the Patriotic Revolutionary Youth Movement (YDG-H), an armed wing of the PKK and an adversary of HÜDA-PAR. Hours later, three more killings were reported. News agencies reported the victims were three men who are members of the HDP. Authorities announced 17 people were detained following the four killings and a number of weapons and munitions were confiscated.

Both the PKK and the HDP denied any connection to the killing of Baran. HDP Co-Chair Selahattin Demirtaş said "connections" between the killing of Baran and his party's members would only be revealed after an official investigation. He stressed that his party - that extols praise for jailed PKK leader Abdullah Öcalan and openly voices support for the PKK's actions - is not an armed organization.

In Sunday's general election the Peoples' Democratic Party (HDP) gained 13 percent of the vote to enter parliament for the first time as a political party.

The HDP is ideologically opposed to Huda Par and the two parties' supporters frequently clash.

The general election, which saw the Justice and Development (AK) Party gain the largest number of seats but fail to achieve the majority needed to form a government on its own, was marred by violence, including a bomb attack on an HDP rally that killed three people.