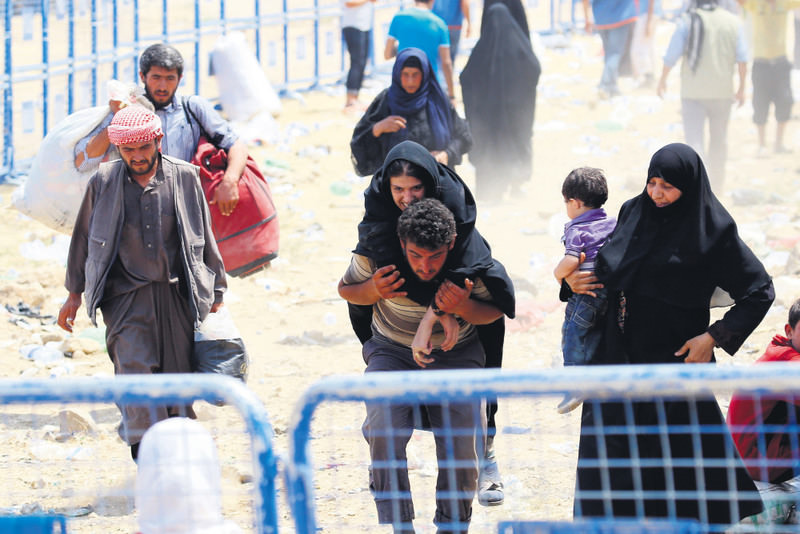 The offensive launched against ISIS in Tal Abyad has forced Turkmens and Arabs out of the town, indicating a possible intention of coalition forces to change the demography of the region by placing Kurds in the vacated area

More than a dozen Syrian opposition groups on Monday urged the PKK-affiliated Democratic Union Party (PYD) in Syria to stop committing "ethnic cleansing" against Arabs and Turkmens in northern Syria.

The statement came after thousands of Syrian refugees streamed into Turkey's Şanlıurfa province through the Akçakale crossing on the Syrian-Turkish border on Sunday, fleeing the clashes between Kurds and the self-proclaimed Islamic State of Iraq and al-Sham (ISIS). The issued statement claimed: "[PYD] YPG [People's Protection Units] forces have implemented a new sectarian and ethnic cleansing campaign against Sunni Arabs and Turkmens under the cover of coalition airstrikes, which have contributed to the bombardment, terrorizing civilians and forcing them to flee their villages."

The operation against ISIS has raised some concerns for Ankara as well, as while it purportedly aims to push ISIS militants out of Tal Abyad, it has also forced ethnic Turkmens and Arabs out, leading them to evacuate the town.

Ankara, which recognizes YPG fighters as terrorists, is worried that the vacated town will be filled with the PYD's YPG forces and their presence close to the Turkish border could put its security under threat. President Recep Tayyip Erdoğan on Saturday voiced his concern over a demographic change in the region and expressed his reservations about the operation, which he doubts only targets ISIS.

Kurdish fighters with the support of Syrian opposition forces and airstrikes by the U.S.-led coalition fighting ISIS have advanced further toward Tal Abyad and are close to seizing the strategic border town from ISIS.

The operation against ISIS, which has large areas of Syria and Iraq, has involved ground fighting by Kurdish forces and airstrikes by the U.S.-led coalition forces. It has led Turkmens and Arabs to abandon their villages. Hundreds of Syrians fled their homes due to intense clashes and headed either south to Rakkah or north to cross into Turkey. They thronged at the border, which is directly opposite the town of Tal Abyad and waited to be accepted by Turkey, depending on its open-door policy. While the anxious wait continued for roughly a day for the refugees as Turkish security forces sealed off the frontier denying their entry, ISIS militants were forcing the refugees to go back to their homes, believing that a civilian presence might prevent airstrikes by the coalition forces.

Turkish officials opened the border on Sunday around 6:00 p.m. amid intense security measures and closed the border again late at night. The officials later opened the border again on Monday around 12.00 a.m., taking in hundreds of Syrians. According to official reports, Turkey has so far let in 20,000 refugees since the operation against ISIS began two weeks ago, and Deputy Prime Minister Numan Kurtulmuş said on Monday that Turkey should get ready for an influx of at least 100,000 Syrian refugees.

Turkey's stance against the PYD has been strict since the U.S.-led coalition, which also includes Turkey, was formed to fight ISIS.

While the U.S. was providing assistance to Kurds fighting ISIS, Ankara refrained from extending help to those it designates as terrorists. Instead, the Turkish government came up with various ideas to cement cooperation in the fight against ISIS, one of which was to use peshmerga fighters from northern Iraq's Kurdistan Regional Government (KRG) in the fight for Kobani and allow their passage through Turkey to Syria.

The YPG repelled the ISIS attack on the border town of Kobani in January. Since then, the YPG has emerged as the most significant partner on the ground in Syria for the U.S.-led alliance that is trying to roll back ISIS's advances.However, Turkey has been hesitant in empowering the YPG in the name of fighting ISIS since it considers the group as an offshoot of the PKK. Ankara fears that a strong structuring in the region might put the security of its borders in jeopardy.
Last Update: Jun 15, 2015 10:51 pm
RELATED TOPICS