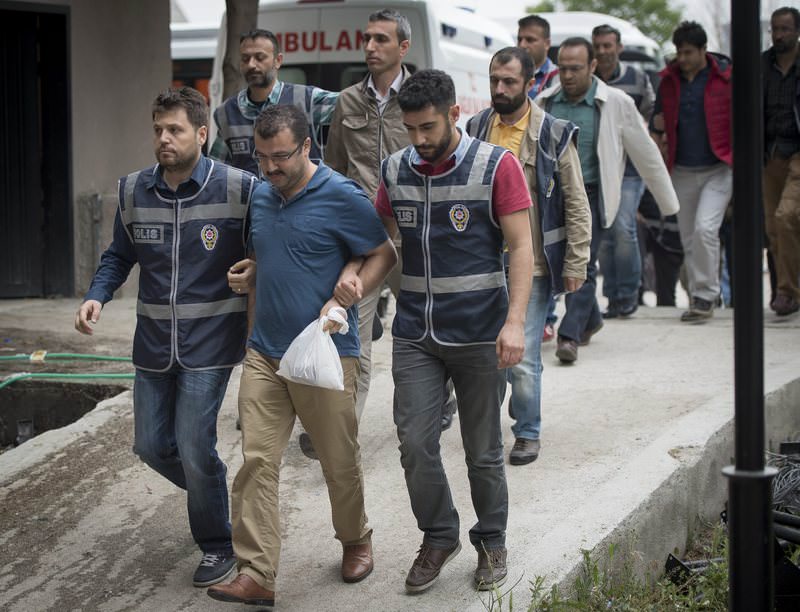 by Daily Sabah Jun 17, 2015 12:00 am
Fifteen out of 23 Gülen Movement-linked suspects detained as part of the fourth wave of an into cheating on the 2010 Public Personnel Selection Exam (KPSS) were arrested on Wednesday.

Public Prosecutor Yücel Erkman, who is in charge of the investigation, has accused the suspects of "being members of a criminal organization," "forging official documents," "committing fraud," "destroying evidence" and "abusing power."

Baki Saçı, who is among the suspects, had reportedly confessed that senior movement member, Berat Koşucu, who fled the country two months ago, had sent him the questions for the 2010 KPSS a day before the exam. In his testimony, Saçı reportedly said that Koşucu had called him to tell him to check his email. "I have a gift for you," he reportedly told Saçı, who had no access to the Internet in his village. The suspect added that he called a friend, Mustafa Süleyman İnanç, who works as a jeweler in the town, and asked him to access his inbox so that he could have a copy of the questions as well. İnanç, who was also detained in the KPSS operation, had reportedly given the same statement in his testimony.

Allegations against the Gülen Movement-affiliated suspects are not only limited to the judiciary, but also with their placement in public institutions. A KPSS cheating scandal hit the headlines when it was discovered that numerous people allegedly affiliated with the Gülen Movement received full marks on the exam although they had performed poorly in their previous attempts.

The suspects in the first operation also faced charges of being members of a criminal organization, forgery, illegal and harmful activity in public institutions, destroying criminal evidence and abuse of power. Police units launched the second wave of the KPSS cheating investigations in 28 provinces and took 35 of 78 suspects into custody. Nine other suspects were taken into custody a day later and the whereabouts of 33 others is reportedly unknown.

Members of the Gülen Movement have allegedly infiltrated state institutions with a supposed aim of bringing down the elected government and taking over the state. The network is run by Fethullah Gülen who lives in self-imposed exile in Pennsylvania.