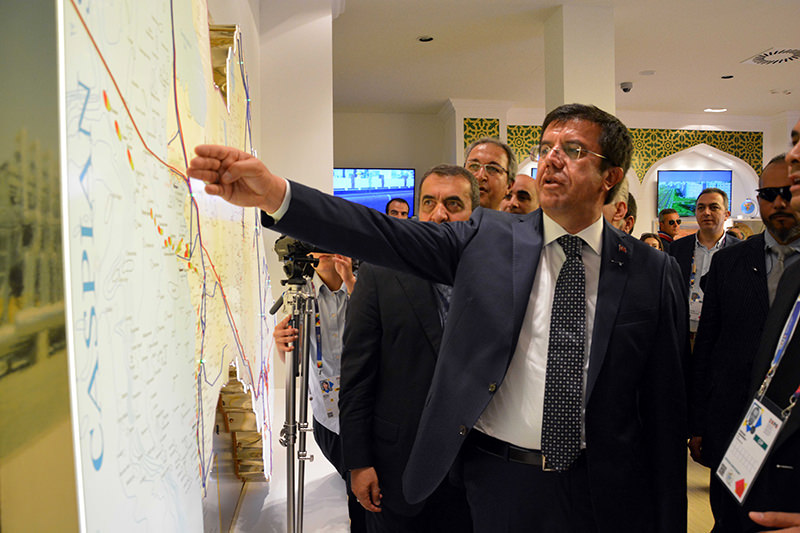 | AA Photo
by Daily Sabah with AA Jun 18, 2015 12:00 am
The outcome of the June 7 Turkish elections should be seen as a call for coalition rather than for early elections, Turkey's Economy Minister Nihat Zeybekci said on Thursday.

On his return to Turkey from the Expo Milano opening, Zeybekci said: "By voting 41 percent for the AK Party, our nation says that we give you the task of establishing a government and governing the country, but you must take a partner or make compromise" Zeybekci said.

"This is a one-sentence summary of the elections. We understand it well. The conclusion of this election is a coalition. Early elections have never been on our agenda," he added.

The AK Party is ready to negotiate with all political parties without preconditions, Zeybekci said. He added that he expects AK Party leader Ahmet Davutoğlu to initiate the government formation process in the first week of July after President Recep Tayyip Erdoğan assigns him with the task.

Turkey's leading business associations met with political parties on Wednesday, and urged the rapid formation of a coalition government, as prolonged uncertainty and a possible snap election would further harm economy.

Zeybekci said that he sees this initiative as encouraging for political parties to form a government.

"But there should not be preconditions like -a moment ago, immediately, at once. And adding negative statements about the economy next to that is unfair to the Turkish economy." he warned.

Although the AK Party won the elections by receiving over 41 percent of the votes, the support it gained from voters was not sufficient for the party to reach a majority needed to form the government on its own, which has led it to seek a coalition partner. As none of the four parties that passed the 10 percent electoral threshold-the AK Party, the Republican People's Party (CHP); the Nationalist Movement Party (MHP) and the pro-Kurdish Peoples' Democratic Party (HDP) - had the majority necessary to form a single-party government, they are forced to negotiate to form some type of coalition following the opening of parliament with the ceremonial oath-taking by MPs later this month.