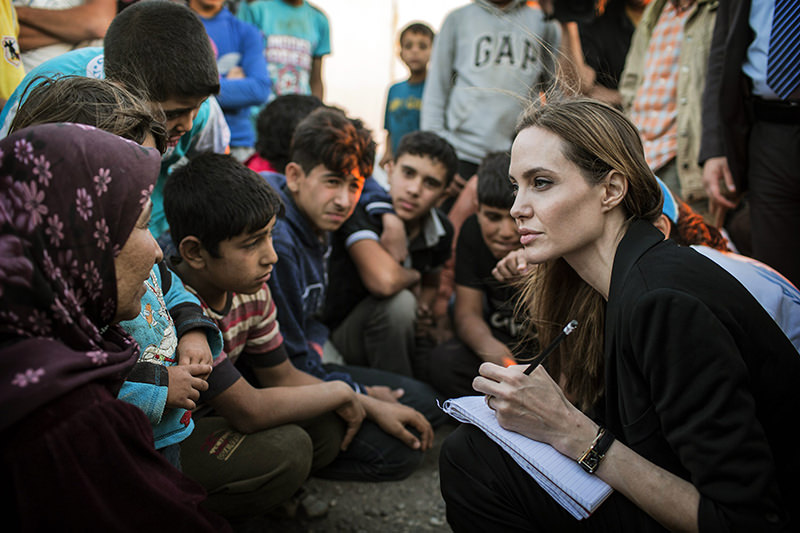 Angelina Jolie taking notes as she speaks with Syrian refugees in a Jordanian military camp based near the Syria-Jordan border on June 18, 2013 (AP Photo)
by Ali Ünal Jun 18, 2015 12:00 am
President Recep Tayyip Erdoğan and U.N. High Commissioner for Refugees Antonio Guterres will join members of the refugee community for iftar, the fast-breaking dinner during Ramadan, on Saturday in the southeastern province of Mardin. Alongside Erdoğan and Guterres, Oscar-winning American actress and UNHCR Special Envoy Angelina Jolie is also expected to participate to the event, local sources reported.

Upon launching the UNHCR's 2014 "Global Trends" report in Istanbul on Wednesday, Guterres will meet senior government officials including Prime Minister Ahmet Davutoğlu in Ankara. According to the Prime Ministry's Directorate-General of Press and Information, Guterres is traveling to Mardin in order to assess the situation on the ground and to meet Erdoğan.

Turkey, which adopted an open-door policy for displaced Syrians in 2011, has since become the world's biggest refugee host. According to the Disaster and Emergency Management Authority (AFAD), the number of Syrian asylum-seekers has exceeded 1.8 million following the most recent influx of some 23,000 civilians escaping clashes between Islamic State if Iraq and al-Sham (ISIS) terrorists, Kurdish Democratic Union Party's (PYD) People's Protection Units (YPG) and U.S.-led coalition airstrikes near Tal Abyad.

Over 275,000 refugees currently live in refugee camps across the country, a spokesperson for AFAD said on Wednesday, and the government has devoted over $5.7 billion to relief efforts in the past four years. "Although the international community praises Turkey's efforts, they contribute five cents on the dollar, with the Turkish government picking up the rest of the check," he said.

The rising number of refugees was also a prominent feature ahead of the general election that took place on June 7. Amid criticisms, Erdoğan reiterated Turkey's commitment to helping refugees. "We reach out to people in need regardless of the color of their skin or the language they speak," Erdoğan said last week. "And we will continue to assist whomever might find themselves in need."

In recent years, Jolie has visited Turkey several times to meet with Syrian refugees at AFAD camps and draw attention to the anguish faced there and to families torn apart by the civil war caused by Syrian President Bashar Assad. More recently, last February Jolie reportedly adopted a two-year-old Syrian boy, Moussa, who lived in a refugee camp in Turkey.

During their visit, Erdoğan, Guterres and Jolie are expected to visit AFAD's camp for Yazidi refugees in Midyat, Mardin.