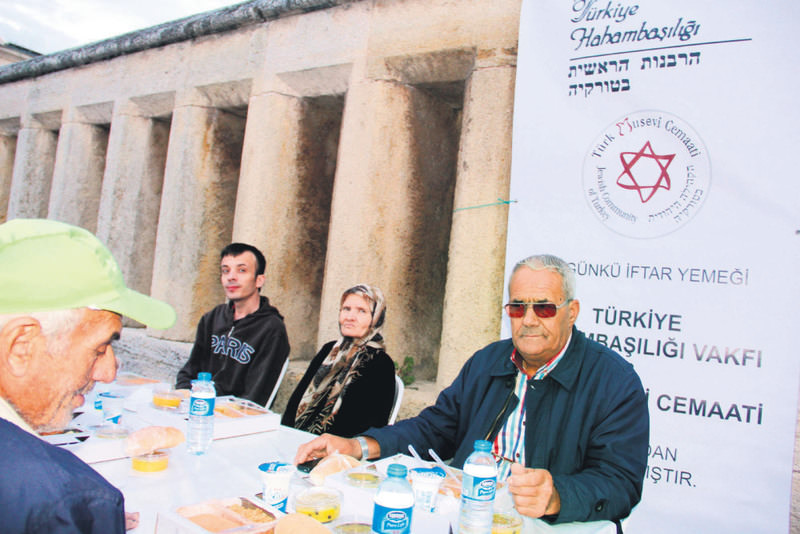 by Fatih Şemsettin Işık Jun 22, 2015 12:00 am
Turkey's Jewish community hosted an iftar dinner for hundreds of Muslims in the Great Edirene Synagogue, also known as Kal Kadosh Ha Gadol, in the northwestern city of Edirne on Monday.

Around 250 people were hosted at the dinner during which an exhibition of Jewish clothes and dresses from the Ottoman era took place and a choir from the Culture and Tourism Ministry performed hymns of Turkish Sufi music.

The dinner was announced by İshak İbrahimzadeh, leader of the Turkish Jewish community. Reported on June 3, he said: "We are preparing a special event on June 22. It will start with an exhibition of Jewish clothes and dresses from the Ottoman era. A choir from the Culture Ministry will then sing hymns to be followed by an iftar dinner. Our community in Istanbul will join their fellow citizens at the dinner. We are also planning another iftar outside the synagogue."

The community also organized another iftar dinner for around 700 people on Sunday. Regarding the organization, İbrahimzadeh indicated that the community has been holding iftar dinners for 15 years in Istanbul and said: "This year, we opened the Great Edirne Synagogue with the General Directorate of Foundations. We could not thank the people of Edirne enough. So we thought about how to deal with this issue and felt that sharing this iftar dinner, contributing to their iftar, was the best way of presenting our thanks. We thank all of them very much."

Warm relations between the Turkish state and the Jewish population in the country are good despite an article published in The New York Times alleged before that the Turkish state promotes anti-Semitism in the country with many Jews deciding to go to Spain where a law of return has recently been passed. In a statement that the Turkish Jewish community made to Daily Sabah following the publication of the article, the community rejected the claim of pressure from the state and pointed out that freedom of expression should not be an excuse to make generalizations and does not reflect the opinion of the whole community.

Opened in March after a restoration project funded by the government, the Great Edirne Synagogue is touted as the largest Jewish temple in the Balkans and the third-largest synagogue in Europe. The synagogue was built in 1907 after a large fire destroyed 13 synagogues in Edirne in the early 20th century. It was in use until 1983, but was abandoned when the number of Turkish Jews dwindled in Edirne. The General Directorate of Foundations began the restoration of the building four years ago. Through the restoration jointly conducted by Jewish architects, it was restored to its former likeness with an interior and exterior makeover.
Last Update: Jun 22, 2015 11:06 pm
RELATED TOPICS