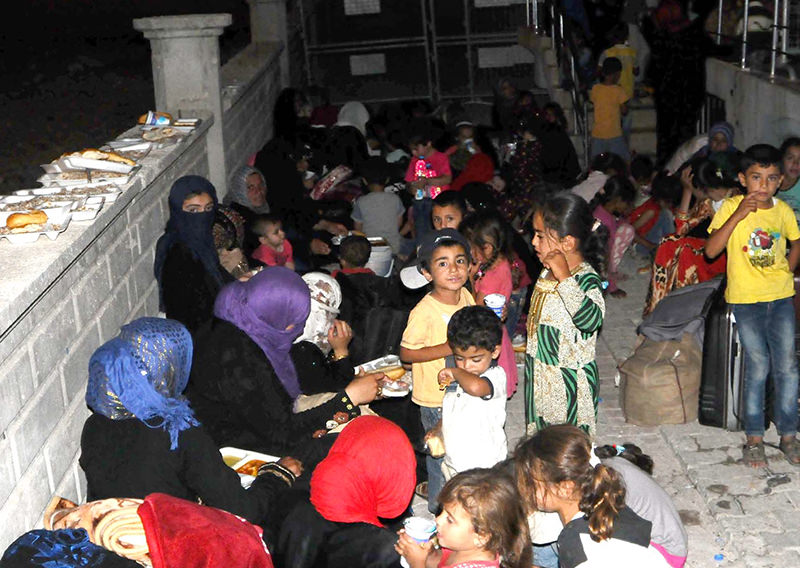 Syrian Turkmens break their fast in Aku00e7akale district of u015eanlu0131urfa province (DHA Photo)
by Daily Sabah with AA Jun 24, 2015 12:00 am
Around 200 more Syrian Turkmen have fled the Syrian border city of Tal Abyad and have taken refuge in southern Turkey due to alleged threats from the Syrian Kurdish PYD forces, which are accused of displacing the Turkmens for demographic adjustments.

The 200 Turkmen, which included women and children, came from the Hamam village in Tal Abyad. They told Anadolu Agency that they had to evacuate their village after threats were given to them by PYD forces controlling the area.

They said that about 700 other Turkmen moved to the east of Tal Abyad while 200 came to Turkey's Ismail Direk border post in Akçakale district of southeastern Şanlıurfa province.

After making an asylum request with Turkish authorities, the Syrian Turkmen were taken to the refugee registration office in the district in army vehicles.

Speaking on behalf of the Turkmen group, Ömer Dede told Anadolu Agency that PYD fighters came to their village recently and threatened to strike their village unless they left.

Dede said the fighters had blamed the Turkmen for supporting the self-proclaimed Islamic State of Iraq and al-Sham (ISIS).

"All Turkmen left the city because of fear. We had no country to turn to except to take refuge in Turkey. All we want is to return to our homes in Syria, which we hopefully can with the help of Turkey," he said.

Dede also spoke about the plight of around 10,000 Turkmen, who according to him, were now living under trees in an area near Raqqa.

"They are stuck between ISIS and PYD we must save them, otherwise they will die," he added.

In the past few weeks, Turkey has been witnessing another massive inflow of Syrian refugees from Tal Abyad and nearby areas as they flee clashes between ISIS and Syrian-Kurdish fighters YPG, which is the military wing of the Syrian Democratic Union Party (PYD).

The Syrian border city was captured on June 15 by YPG with the help of U.S.-led coalition airstrikes in northeastern Syria to push back ISIS forces.

Turkey, which shares a 900-kilometer long border with Syria, has given refuge to more than 1.7 million Syrians, according to the UN's refugee agency, with more people coming in because of ongoing bloodshed in the war-torn country.