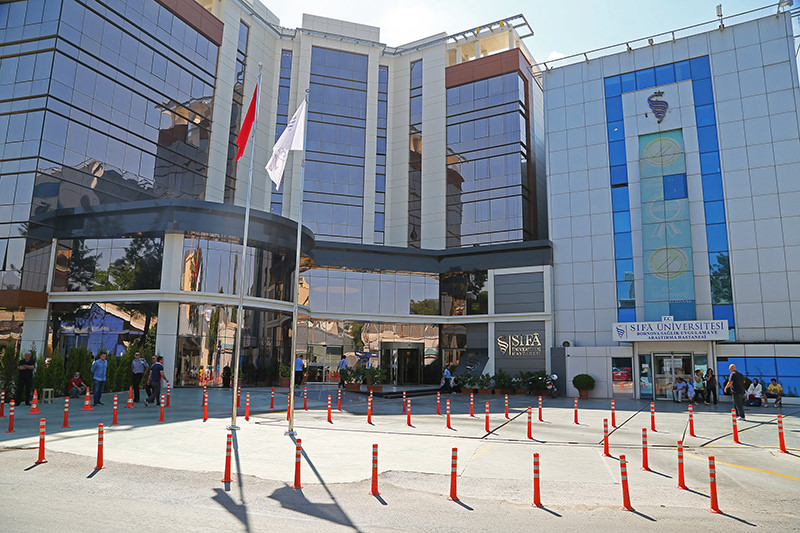 u015eifa Hospital and University complex in the Aegean city of u0130zmir (AA Photo)
by Daily Sabah Jun 24, 2015 12:00 am
Police forces in the Aegean province of İzmir raided the Turkish Physicians' Foundation early Wednesday on allegations of the illicit transfer of funds by the Gülen Movement.

Teams from the İzmir Police Financial Crimes Department started searching Şifa Hospital and University, which is affiliated with the foundation, upon instructions from İzmir Public Prosecutor Okan Bato. It was reported that police confiscated documents, files and computers found on the premises for the investigation. Tax inspectors also attended the raid, according to reports.

The probe was launched based on allegations that the foundation was involved in illicitly transferring money with the Gülen Movement as well as forgery.

A total of eight suspects, some of whom are professors, are involved in the case.

Turkish banking regulators last month passed a decision to seize the entire shares of Gülen Movement-affiliated Bank Asya due to the bank's failure to fulfill its obligations despite the measures taken by Turkey's Banking Regulation and Supervision Agency (BDDK) watchdog. Bank Asya was founded by business figures who had links with the Gülen Movement.

The Gülen Movement is a transnational movement accused of wiretapping government officials, encrypted phones, espionage, cheating in nationwide public personnel selection and military exams and infiltrating state institutions with the purported aim of overthrowing the government. It is led by Fethullah Gülen, who lives in self-imposed exile in Pennsylvania in the U.S. Government officials have continuously expressed their determination to continue to lawfully fight the Gülen Movement, which is considered to be a threat to national security by the government.