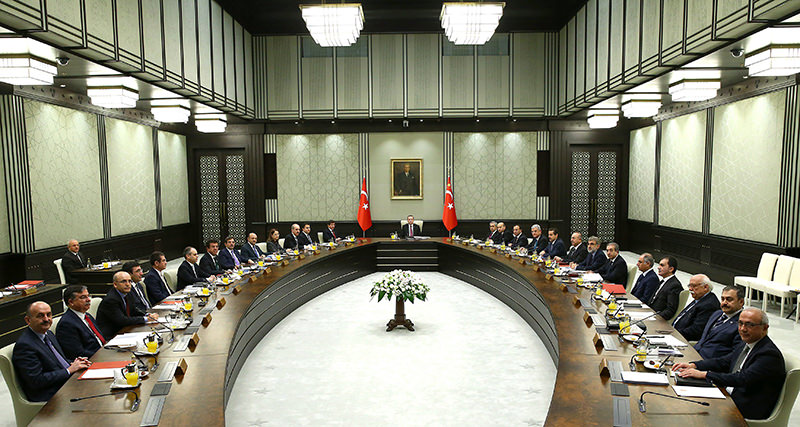 | IHA Photo
by daily sabah
Jun 29, 2015 12:00 am
The National Security Council (MGK) meeting, which was expected to be held on Tuesday, took place on Monday in line with recent developments in northern Syria. After the four-hour long meeting, a written press statement regarding the content of the meeting was released, saying the members had "thoroughly assessed" the events taking place in Syria as well as "possible threats" and "additional security measures" along the border. The statement further said that actions to change the demographic structure through terrorist attacks targeting the civil population in northern Syria were worrisome. Turkey has frequently raised its concerns over a possible demographic change committed by Syrian Kurdish Democratic Union Party (PYD) forces in Syria's Tal Abyad where intense clashes with Kurds and the Islamic State of Iraq and al-Sham (ISIS) have taken place.

Over 10,000 Turkmen and Arab Syrians, escaping the clashes between the two groups, have taken refuge in Turkey. Turkish officials have said that Arabs in the region have been pushed away as Kurds have flown in the area.

Also, according to the National Security Council's meeting, Turkey's struggle against the "parallel structure" will press ahead.

The meeting focused on the new wave of migrations following the takeover of Tal Abyad by ISIS, the attempts to form a Kurdish state along the Syrian border and the attack in Kobani, which was carried out by ISIS militants last week.

Military officials and MİT were expected to present intelligence reports from the region in the meeting, while Foreign Minister Mevlüt Çavuşoğlu was expected to touch upon the diplomatic initiatives by Turkey.

The recent suicide attacks conducted by ISIS in Kobani, a Syrian Kurdish border town currently controlled by the People's Protection Units (YPG), and the taking from ISIS of another border town, Tal Abyad, by the Kurdish forces have fueled Ankara's fears that violence could extend to Turkey. To stem a possible threat against its frontiers, Prime Minister Ahmet Davutoğlu told the Turkish Armed Forces (TSK) to prepare for an operation across the border if any threat approaches.

The rules of engagement regarding Syria have also been regulated accordingly for a cross-border operation against ISIS to give Turkish troops a freer hand to fire into Syria, which disintegrated after the outbreak of civil war in 2011.

Two forms of military intervention were on the table during the MGK meeting. The first option was the establishment of a safe zone in Jarablus. However, for the action to be put into effect, Turkey will act in accordance with coalition partners that will hopefully be fixed once Davutoğlu starts the negotiating process with parties to form a government. Through the diplomacy conducted with coalition forces, Turkey will check the pulse of the international community concerning the option before it is realized.

If Turkey does not get diplomatic support from its allies, then "Plan B" will come into play, providing the Free Syrian Army (FSA) with artillery backup. The army, which has recently been considering the option, opened it up to debate during the meeting where the risks posed by the plan were discussed. It was also questioned whether live arms and airstrikes by Turkey to repel ISIS to the south will be abused by the militants who Turkey fears might use civilians in the region as a shield.

The council also assessed whether in the case of a cross-border operation, Turkish jets could be damaged by the Syrian regime's air defense systems. A detailed analysis was made regarding the concern.

Turkey's giving the go-ahead for an operation against ISIS has also prompted preparations by ISIS for self-defense.

Speaking to Al-Jazeera, Mahmud Hasan, a Syrian opposition forces commander, said that ISIS militants dug 4-meter holes around the villages they control near the Turkish border.

"They are taking precautions against any ground attack by Turkey. ISIS is trying to secure itself after the allegations that Turkey might conduct a military intervention in Syria became public," Hasan said.

"We as the Syrian opposition think that ISIS opens up a space for the separatist Kurds," Hasan said, adding that Turkey, as a friend of Syria, "must prevent the dirty project."

Ankara's concerns about instability in the region are not limited to ISIS. The YPG's driving out of ISIS from Tal Abyad also became a matter of unsettlement for Turkey. Tal Abyad lies between two Kurdish-controlled cantons, Kobani and Jazeera, so its capture is of strategic importance as it opens a supply route between the two spots, triggering Turkish fears that such bridging will ramp up Kurdish power in the region, ultimately posing a threat to Turkish security.

Erdoğan previously said he was worried that the PYD and the PKK were filling the vacuum left behind after driving ISIS back, and that it could "create a structure" near its borders that might threaten the country.