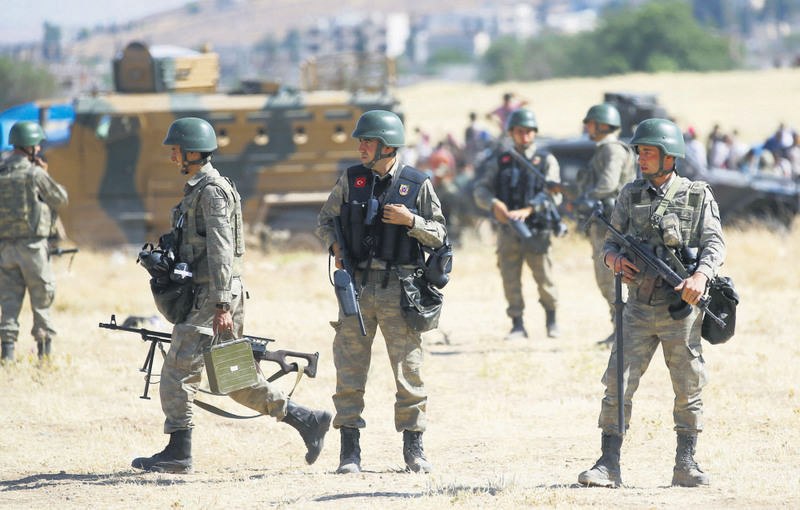 Sources from Ankara further indicated that the National Security Council (MGK) discussed the PKK's aim to bring the heavy weaponry it seized in northern Syria to Turkey to form local armed forces. A PKK leader, Murat Karayılan, recently said if Turkey intervenes into northern Syria, the terrorist organization will turn Turkey into a war zone.

The National Security Council (MGK) meeting that was held Monday in Ankara addressed critical issues such as the recent developments in Syria and additional security measures that might be taken along the border.

Sources from Ankara further indicated that possible threats that could be caused by the Syrian Kurdish Democratic Union Party's (PYD) People's Protection Units (YPG) in the north Syrian town of Tal Abyad where intense clashes between the YPG and the Islamic State of Iraq and al-Sham (ISIS) have taken place were also evaluated. President Recep Tayyip Erdoğan had previously expressed his concerns over the risks of the PYD and the PKK establishing a "settlement" near its borders that might threaten the country. Sources in Ankara said the PKK has seized heavy weaponry and aims to bring them to Turkey.

Intelligence reports that were presented to government officials emphasized a serious threat to Turkey by the PKK, sources in Ankara said. Additionally, sources have underlined that the reports indicated the PKK is trying to bring the seized heavy weaponry to Turkey in efforts to establish a local armed force. In this regard, it has further been claimed that the reconciliation process had slowed down with the unwillingness of the PKK to lay down arms.

There are further claims that the reconciliation process aided the PKK in enhancing its weaponry. In this respect, the PKK's second-in-command, Murat Karayılan, gave a statement to Fırat News Agency, a PKK mouthpiece, saying that if Turkey intervenes in Rojava, the Kurdish-majority area in northeastern Syria, then the PKK will turn the entirety of Turkey into a warzone in response.

The reconciliation process, which was initiated by the Justice and Development Party (AK Party) government, was followed by a series of democratic reforms to improve the rights of Turkey's Kurdish population once the cease-fire was announced in 2013. In efforts to successfully finalize the process, the government had required the PKK to lay down arms. The imprisoned PKK leader, Abdullah Öcalan, announced in his annual Nevruz message in March that it was time to lay down the weapons and continue the cause through democratic means. However, the PKK stalled organizing the meeting to discuss abandoning arms despite Öcalan's call. The process was crippled once more after the deadly attack in Ağrı province, where in early April the PKK attacked a group of soldiers providing security at a tree-planting ceremony.

Although the PKK attacks and threatens Turkey, the organization's senior figures, such as Cemil Bayık, president of the Kurdistan Communities Union (KCK), which is an umbrella organization that encompasses the PKK, had announced in early April that the organization will not engage in fighting any longer and that it is going through a transformation. While People's Democratic Party (HDP) Co-Chair Selahattin Demirtaş's democratic rhetoric appealed to voters during June 7 general elections in western Turkey, the PKK, far from laying down their arms, kept igniting aggression in the eastern provinces.

In late May the General Staff announced that a soldier and a civilian was kidnapped by the PKK in the eastern province of Muş, which was followed by militants torching vehicles to block the construction of a road in Bingöl. To further disturb the reconciliation process, the AK Party headquarters in another eastern province, Mardin, was bombed
Last Update: Jul 01, 2015 9:37 pm
RELATED TOPICS