No hesitation from Ankara against any direct threat from Syria 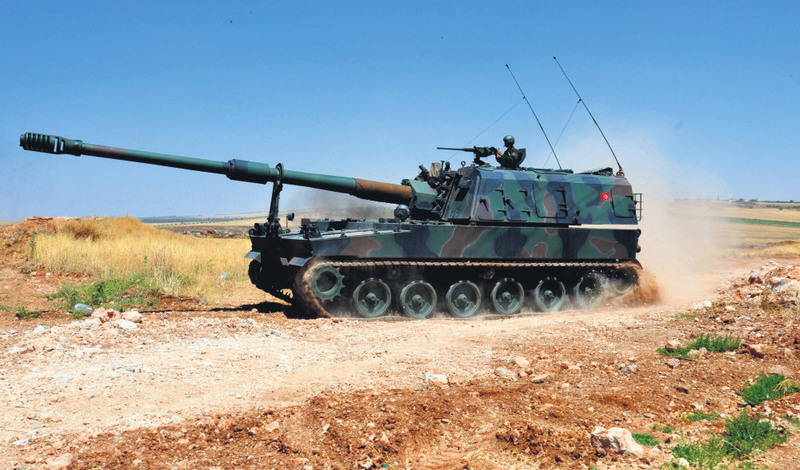 In response to war speculations in the media Prime Minister Davutoğlu assured that Ankara will not drag Turkey into the Syrian quagmire unless it is necessary, but reiterated that if any threat approaches the country, it will not hesitate to intervene to avert the danger

Prime Minister Ahmet Davutoğlu said that he will not plunge Turkey into an "adventure" in Syria unless there is a direct threat to the country's national security. Speaking live on Thursday night, Davutoğlu said that Turkey will not hesitate to take military action in Syria if there is a direct threat to its national security, but if a case like that does not occur no one should create speculation about a military operation in Syria.

He said that a direct threat would come from ISIS, Syrian regime forces or the Kurdish Democratic Union Party (PYD) and underscored Turkey's readiness for any development in Syria, such as an attack or a refugee influx due to ongoing clashes. His comments came after a senior state official told Daily Sabah that Ankara is adopting a detailed strategy to combat terrorist groups creating chaos next door to prevent a refugee influx into the country, which is already home to nearly 2 million Syrians escaping the civil war.

Turkey's strategy includes direct shelling of ISIS militants in case of attempts to take control of strategic points near the northern city of Aleppo.

While Turkey would "not wait for tomorrow" to act in Syria "in the event of a threat to domestic security," Davutoğlu said a unilateral intervention was "out of the question" under the current conditions. "We will never allow ourselves to be led down that road," he said. "Our people can rest easy."

Ankara started deploying additional troops along the border with Syria as fighting between opposition and regime forces in Aleppo intensified on Friday.

Acting in coordination with the anti-ISIS coalition, Turkish troops will make sure ISIS does not threaten the crucial Syrian town of Aleppo, as it will directly affect Turkey in terms of security and incoming refugees. Analysts warn that over 2 million Syrians could flee their homes if ISIS gets control of the northern Syrian town of Mare in the Azaz district of Aleppo. Turkey fears that the current number of 1.8 million Syrian refugees could near 3 million if ISIS gains control of the strategic town.

Ankara will reportedly contribute to anti-ISIS coalition airstrikes with artillery to prevent further enlargement of the extremist group. Turkish Armed Forces (TSK) shelling will take place in accordance with close cooperation with the coalition. Sources also indicate that Turkey is ready to discuss in what conditions it would allow the United States to use İncirlik Air Base in southern Turkey for attacks against ISIS.Turkey's rules of engagement, which previously only targeted Syrian President Bashar Assad's regime, will become more comprehensive and include ISIS in its amended form. The implementation of the regulation in military intervention in Syria is reportedly completed and is expected to be put into effect in the upcoming days without losing time as Ankara's concerns are at their peak that the violence in Syria could extend to Turkey and lead to a costly protracted refugee situation in the country.

The militant group is also a national threat to Turkey because of its activities within the country. Dozens of ISIS-linked suspects were detained after simultaneous raids in five provinces across the country. Suspects were charged with financially supporting and providing militants for the organization. Furthermore, three ISIS militants were caught at the Syrian border and two suspects were sent to prison in Ankara, pending trial.

Daily Sabah's source confirmed the claims of the exclusive story of Daily Sabah's report, which stated that a group of ISIS and Syrian regime commanders held a meeting at a gas production plant in al-Hasaka's al-Shaddadi area on May 28. The two warring factions met not to stop fighting each other, but to focus on a common enemy. The common enemy to be destroyed was the rebel forces, especially the moderate and Western-backed FSA, which recently made significant gains against the regime in Idlib, Aleppo and Deraa. A source close to the National Intelligence Organization (MİT), speaking on the condition of anonymity, told Daily Sabah that the Assad regime and ISIS made an agreement on that day at the gas production plant.

It has long been claimed that ISIS works for Iran or Assad, but there is no evidence to prove these conspiracy theories. However, when looking at the war conditions, local and temporary agreements are possible. Both Assad and ISIS hate other rebel forces – the regime considers the rebels terrorists and has entered a deadly war with them. ISIS sees the rebels as the main obstacle in its path to creating a new state in Iraq and Syria based on a strict interpretation of religious jurisprudence. The source revealed that according to the deal, the Assad regime and ISIS will cooperate in certain areas, especially where they are in trouble with rebel forces like northern Aleppo, and while ISIS will increase its attacks on the FSA, the regime will also intensify airstrikes. Moreover, the Syrian regime asked ISIS to specifically target some rebel leaders like Zahran Alloush, who controls the Jaysh al-Islam (Army of Islam) group that operates in east Ghouta in the Damascus suburbs.
Last Update: Jul 04, 2015 12:20 pm
RELATED TOPICS