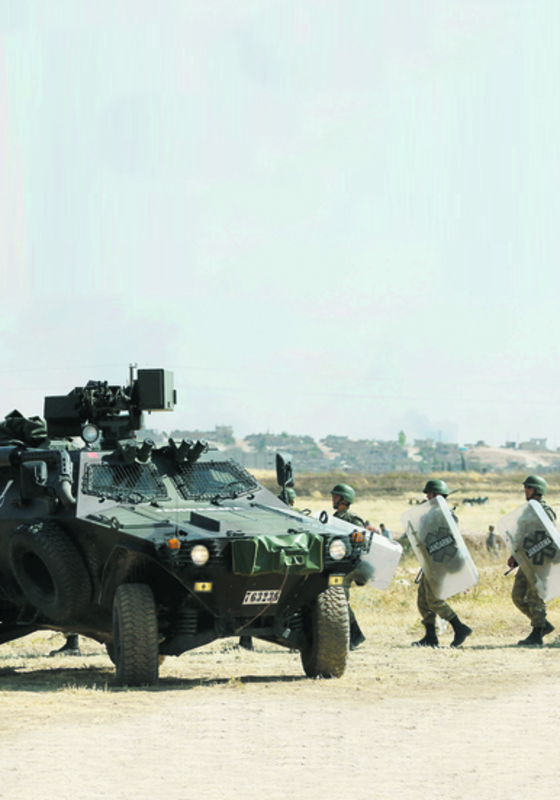 Due to the increasing ISIS threat, Turkey decided to further tighten its 900-kilometer border with Syria through new security measures. The Finance Ministry has reportedly allocated extra funds for the newly-adopted measures to be implemented as soon as possible

The government has decided to take solid steps to secure its border with Syria. Fearing another refugee influx and Islamic State of Iraq and al-Sham (ISIS) at its door, Ankara is alarmed by continuous ISIS attacks on Western-backed moderate Syrian opposition groups in the northern districts of Aleppo. According to sources, various security measures will be taken at 13 border crossings with Syria, and the Finance Ministry has reportedly allocated extra funds for security measures to be implemented as soon as possible. Ankara is also deploying additional troops along the border with Syria, as fighting between opposition and regime forces in Aleppo has intensified. Syrian opposition fighters launched a wide-scale attack on regime strongholds late Thursday in the northern province of Aleppo. Ankara's wider strategy reportedly includes the direct shelling of ISIS militants in case of attempts to take control of strategic points near the northern city of Aleppo. Ankara aims to bolster the presence of the Western-backed Free Syrian Army (FSA) with possible artillery fire directed at ISIS.

The new security measure is limiting civilian passage at the border crossings. The Girmeli and Kamışlı border crossings will only allow specially authorized aid to cross to the other side of the border. As for the Mürşitpınar crossing, authorities will reportedly further limit people that want to cross the border to two days a week. Additional troops will be deployed at the rarely used Cizre-Andivar border crossing. Reconnaissance flights will be increased near the border, and more fighter jets will be transferred to the Diyarbakır Air Base.

Prime Minister Ahmet Davutoğlu recently said that he would not take Turkey into an "adventure" in Syria unless there is a direct threat to the country's national security. He added that Turkey will not hesitate to take military action in Syria if there is a direct threat to its national security, but if a case like that does not occur, no one should speculate about a military operation in Syria.

He said that a direct threat would come from ISIS, Syrian regime forces or the Kurdish Democratic Union Party (PYD) and underscored Turkey's readiness for any development in Syria such as an attack or a refugee influx due to ongoing clashes. His comments came after a senior state official told Daily Sabah that Ankara is adopting a detailed strategy to combat terrorist groups creating chaos in Syria to prevent further refugee movement to Turkey, which is already home to nearly 2 million Syrian refugees.

While Turkey would "not wait for tomorrow" to act in Syria "in the event of a threat to domestic security," Davutoğlu said a unilateral intervention was "out of the question" under the current conditions. "We will never allow ourselves to be led down that road," he said, adding, "Our people can rest easy."

Two alliances of Syrian opposition groups battled to advance in government-held western Aleppo on Saturday, seizing an army barracks in one district, but losing ground in others in some of the fiercest fighting in the city since the conflict began.

The Syrian Observatory for Human Rights, a Britain-based monitor, reported heavy clashes in several parts of western Aleppo, Syria's former economic powerhouse. It said fighters from the Conquest of Aleppo alliance of mostly moderate forces had captured a former research center being used as a military barracks, opening up lines of attack against several nearby regime-held districts.

Control of the city has been largely divided between the government in the west and rebels in the east since shortly after fighting began there three years ago. Front lines have remained fairly static since then, though both sides have at times sought to encircle the other by advancing in the countryside around the city.
Last Update: Jul 06, 2015 1:15 am
RELATED TOPICS