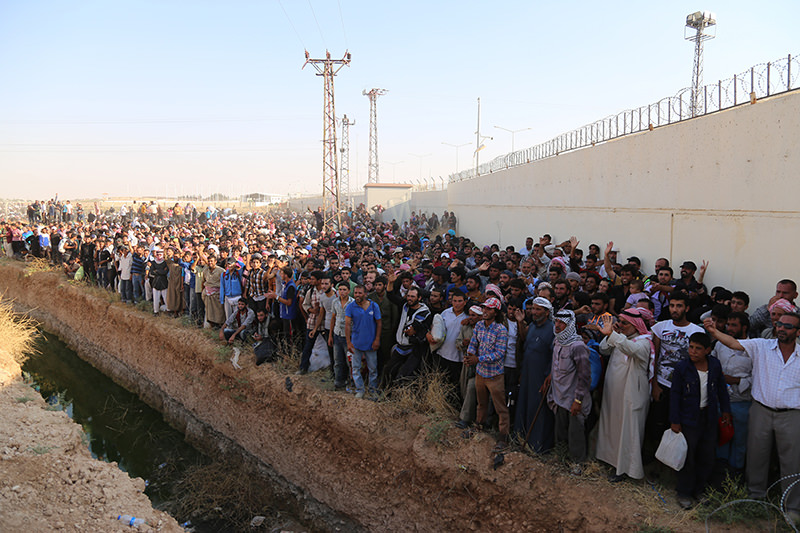 | AA Photo
by Daily Sabah Jul 07, 2015 12:00 am
Disaster and Emergency Management Agency AFAD President Fuat Oktay met with the members of the media Monday evening and provided the latest information on the status of Syrian refugees in Turkey. Oktay said there are 278,200 refugees in camps that can hold up to 325,000 people and underlined that 1.6 million Syrian refugees are living by their own means. Turkey is enhancing safety measures on its border with Syria in a decision to take solid steps to secure the border, fearing another refugee influx due to continuous clashes between the Islamic State of Iraq and al-Sham (ISIS) and the Kurdish Democratic Union Party's (PYD) People's Protection Units (YPG). Emphasizing that a new refugee influx is concerning, Oktay added, "mobility of that scope poses a serious threat to Turkey's security. Constituting the threat is the mobility of approximately 4.5 million people and the possibility of PYD's [YPG] crossing east of the Euphrates."

Following the recent clashes between the YPG and ISIS, approximately 24,500 people have fled from Tell Abyad to Turkey. Oktay said that only 4,000 of these people returned to Tell Abyad while most of the rest have not returned due to fear.

"The region that is most prone to cause a new influx of refugees is the territory between Afrin and Jarabulus. The fragile structure of the region carries the risk of a new wave of refugees to Turkey. When we take Aleppo province into consideration, a development may cause the mobility of 4 million people, resulting in 100,000 refugees coming to Turkey in the first 24 hours," Oktay said, and added that in the case the YPG crosses the Euphrates, Turkey will consider it a serious security risk and will act more concretely.

Commenting on preparations in a case of another refugee influx, Oktay said a refugee camp for 55,000 people is being readied in Turkey's south central city of Kilis. "If the current situation near the border continues, a safe zone will become a necessity for Turkey. We observe that coalition forces are more sensitive toward Turkey's concerns. This development pleases us," Oktay said. He stressed that the YPG is not Turkey's only concern and that the YPG and ISIS are weakening the Free Syrian Army, which is concerning Turkish officials.Providing information on the services that Turkey provides for Syrian refugees, Oktay said that AFAD has provided 8.5 million clinical services and 350,000 patients had been treated in hospitals while approximately 250,000 people had varying operations. In regard to Syrian children's education, he said there are almost 80,000 students in the refugee camps. "We have started a new project with the National Education Ministry called the Foreign Student Information System. With this project we have created a database with data of 600,000 students. Thus, we are able to track how many students are attending which classes, who needs education and how we can integrate them into our education system. Cooperating with the National Education Ministry, we are planning to provide education to these students through an e-school system," he said.

Underlining that there is a serious demand on learning Turkish both in and outside of the refugee camps, Oktay emphasized that Turkey aims to not lose a new generation.
Last Update: Jul 08, 2015 10:51 am
RELATED TOPICS