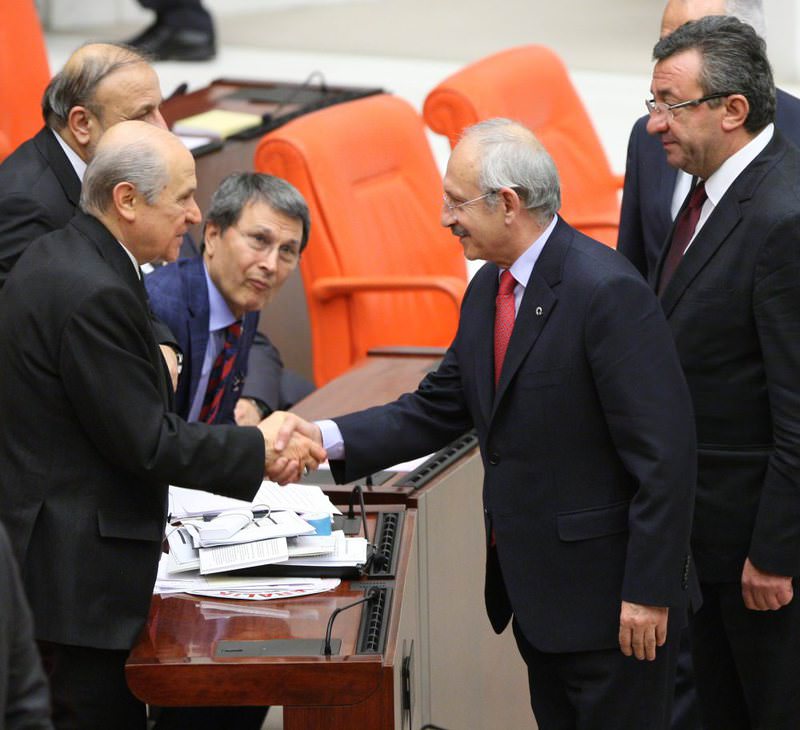 Opposition parties, incapable of forming a partnership against the AK Party, a long-standing common rival, diverted criticism against each other as a result of escalating tensions that emerged with AK Party candidate İsmet Yılmaz's election as Parliament speaker

The opposition parties that concentrated their energy on enhancing their ability to beat the Justice and Development Party (AK Party) during the election campaigning, have fallen out with each other following the elections, plunging Turkey into the uncharted territory of a hung parliament. Having not much in common other than their will to stand against the AK Party, the opposition ran afoul of each other after failing to forge a coalition that was followed by a lack of compromise to come up with a joint candidate for Parliament speaker against the AK Party.

The elections, not giving any party sufficient power to lead single-handedly, have forced the leaders of the parties to look for a coalition partner, a task that has proven fairly difficult heretofore, as none of the parties were able to hammer out a solution to their rigid differences.

During the process, which is yet to enter an official phase with President Recep Tayyip Erdoğan's instructing Prime Minister Ahmet Davutoğlu to forge a new government, the AK Party has displayed the most consistent stance. Right after the elections, Davutoğlu said that the AK Party will cast aside their differences, and approach each party without discrimination to avoid leaving Turkey without a government. However, the opposition parties have brought the process to a deadlock, holding on to their wish to form a partnership that excludes the AK Party.

Tension is running high on the part of the opposition with a war of words that emerged following the Parliament speaker election. İsmet Yılmaz from the AK Party won against CHP candidate Deniz Baykal, and the Republican People's Party (CHP) deputies and the Peoples' Democratic Party (HDP) put the blame of the failure on the Nationalist Movement Party (MHP), who did not vote for Baykal in the last round, citing the HDP support for him. MHP leader Devlet Bahçeli, prior to the elections, had said they would support their own candidate, Ekmeleddin İhsanoğlu until the end, and if he failed to proceed to the final round, they would be neutral, using blank votes.

This was when an exchange of hard-hitting words began between the CHP, the MHP and HDP deputies. The first to react to the election result was CHP deputy Haluk Koç. Delivering a blistering criticism of the MHP, he said the MHP implicitly supported the AK Party by remaining neutral and handing the victory to them. The leader of the CHP, Kemal Kılıçdaroğlu and co-chair of the HDP, Selahattin Demirtaş, joined the fray. The MHP was not late to respond to the accusations, who asked the CHP why they [instead of Baykal] supported their joint presidential candidate İhsanoğlu.

"Is the MHP's asking for support trivial and illegitimate, and the CHP's asking for it significant and legitimate? Why did they not support a candidate they thought was sufficient for the office of presidency?" the MHP deputy wrote on his Twitter account in response to the allegations that targeted his party.

The debates heated up on Monday after Baykal, speaking live on CNNTürk, said CHP deputy Levent Gök met with MHP deputy Yusuf Halaçoğlu the day before the elections and that Halaçoğlu said if İhsanoğlu cannot run in the final round, all deputies will vote independently.

After the claim, Halaçoğlu contacted the program via telephone and refuted the claims.

"I have never conveyed such a message to Gök. I told him we would support our own candidate and that they should talk to Bahçeli. He either got the message wrong or there is something unethical here," Halaçoğlu said.

- Kılıçdaroğlu to push luck with MHP for opposition bloc

Although the rift between the CHP and the MHP has deepened following the election of Parliament speaker, CHP leader Kılıçdaroğlu wants once again to try his hand with the MHP in a bid to forge a coalition government that excludes the Justice and Development Party.

Kılıçdaroğlu, who proposed an opposition bloc that consisted of the CHP, the MHP and the HDP for a coalition government, was stringently turned down by the MHP leader, who suggested his party will never side with the HDP. Despite being rejected, Kılıçdaroğlu knocked on his door again shortly afterwards, and offered him the Prime Ministry to coax Bahçeli into a partnership. This offer too was harshly rejected by Bahçeli, who said his party is not in pursuit of "trivial" things such as rank. Following these developments that narrowed down the options to two, the election of the Parliament speaker, which İsmet Yılmaz from the AK Party won against the CHP candidate Deniz Baykal, the MHP escalated tensions between the two parties.

Kılıçdaroğlu began giving the AK Party the green light as a last resort, and said his party was open to negotiations. He put forth his stipulations, but said they "won't be revanchist" and apply them instantly. Now, amid all these issues, hopes don't seem to dim for Kılıçdaroğlu over an opposition bloc and before the

official negotiations began, he once again intends to knock on his door, recent media reports claim.

Kılıçdaroğlu, who believes all opposition parties have common concerns about the AK Party government, will reportedly head to Bahçeli to say: "We have to fix the damage caused by 13 years of AK Party rule."

While the CHP party administration adopts such an attitude, intra-party debates regarding the speaker elections continue. Kılıçdaroğlu reportedly warned CHP deputies to watch their remarks regarding the MHP before he tries his last chance with Bahçeli. n

MHP leader Bahçeli tones down talk over a coalition

MHP leader Bahçeli, who has been held responsible by the opposition for blocking the forging of a government, struck a milder tone over a possible coalition on Monday, speaking after an iftar dinner. He said it is hard for two parties with different world views to come together, but if it succeeded, he said a slew of problems can be defused via coalition governments.

"Two parties with different points of view ally. This is hard, it entails patience. Our principles are clear. We can't be people in pursuit of rank," Bahçeli said.

The MHP's stipulations were three, with the end of the reconciliation process between the government and the PKK being the main principle. The MHP believes the HDP is closely associated with the PKK and that terrorists cannot be negotiated with. The other two conditions of the MHP have been put forth as the president acting within the boundaries of the constitution and digging up the corruption claims against four former ministers.

The odds are high for early elections

With the options narrowing, party leaders agree that early elections loom for Turkey. Taking into account the current pessimistic atmosphere, it will be difficult for the interim prime minister to make a deal to forge a government, despite his recent enthusiasm for a coalition.

Shortly after HDP Co-Chair Selahattin Demirtaş said the possibility of a coalition was distant due to a lack of compromise between the parties, the leader of the CHP, Kemal Kılıçdaroğlu said on Sunday that he too considered the chances of forging a new government were slim, and that the "odds are high for snap elections." The MHP, which has been the main cause of the deadlock in forming an alliance due to its rigid principle of "never being part of a plan that involves the HDP," has been mentioning the option of new elections since the June elections, which gave neither party sufficient power to lead alone.

HDP Co-Chair Demirtaş expressed reservations over a possible coalition last Thursday, saying there is a slim chance of forging a coalition amid the lack of compromise between the parties. He said even if the formation of a coalition is accomplished, "it will never be durable." Demirtaş, who has purportedly shunned snap elections so as not to risk the votes that brought the HDP over the 10-percent election threshold and assisted his party's entrance into Parliament for the first time, said "a new election is required for things to be on track."
Last Update: Jul 07, 2015 10:27 pm
RELATED TOPICS