Exchange of sharp words between MHP, CHP morphs into battle 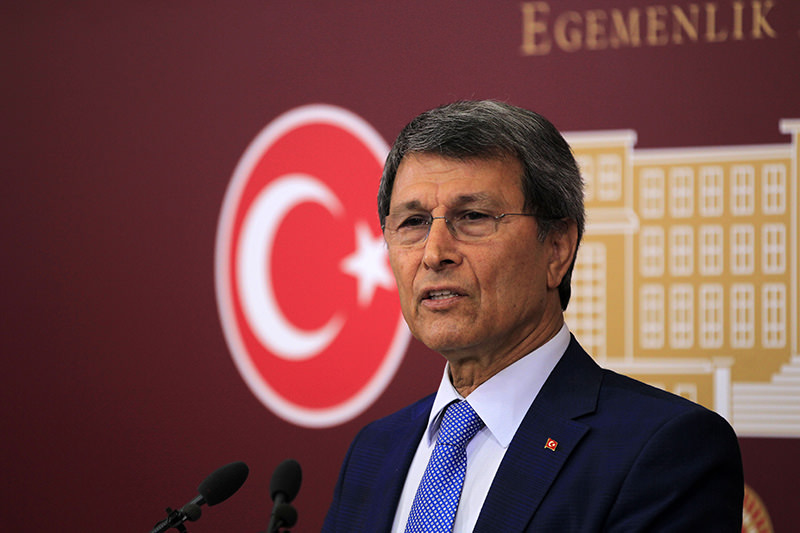 MHP Deputy Yusuf Halau00e7ou011flu (AA Photo)
by Daily Sabah with Wires Jul 08, 2015 12:00 am
The exchange of sharp words between the Republican People's Party (CHP) and Nationalist Movement Party (MHP) that emerged after the recent Parliament speaker election, during which İsmet Yılmaz won against CHP candidate Deniz Baykal, morphed into a battle as deputies began new arguments.

The MHP has been the target of accusations following the Parliament speaker elections. Yılmaz from the AK Party won against Baykal, and CHP deputies and the pro-Kurdish Peoples' Democratic Party (HDP) have pointed the finger of blame at the MHP, which abstained from in the last round, citing the HDP support for him. MHP Chairman Bahçeli prior to the elections had said his party would support their own candidate, Ekmeleddin İhsanoğlu, until the end, and if he failed to proceed to the final round, they would be neutral, using blank votes. The move was interpreted by CHP deputies as veiled support for the AK Party. Haluk Koç from the CHP accused the MHP of handing the win to the AK Party.

The MHP responded to the accusations and the squabble grew. Yusuf Halaçoğlu, a spokesman for MHP, said on Tuesday his party's supporting of a "man without religion" would infuriate his base. The very remarks sparked outrage in the party and has elicited an immediate response. Koç said: "I could say words that target him that he could not take. Unless they apologize and say it was said at a moment of distress, we are at a point to give the harshest response to the insult against millions committed to their faith and religion. Know your place!"

Özgür Özel, another deputy from the CHP, has also called on Halaçoğlu to apologize and to step down because of his statement.

Halaçoğlu, however, denied on Wednesday ever saying that CHP was "irreligious and non-believing", during a telephone interview with the Hürriyet Daily.

"What I actually said was if the MHP would have voted for Deniz Baykal, the CHP candidate for parliamentary speaker," Halaçoğlu reportedly said, "the ruling Justice and Development Party [AK Party] would have denounced us, the MHP, as voting for the 'irreligious, and atheist party,' as AKP officials have done so in the past."

Halaçoğlu has also said that he "did not think the CHP was irreligious or atheist" as well, since "it was not up to MHP or myself but only up to God to measure whether anyone is a true believer." The MHP deputy has also reiterated his stance regarding his statement on twitter on Wednesday night. He said, "No matter how much backlash, I made no statement which requires an apology."

The deputy chairman of Turkey's opposition Nationalist Movement Party (MHP), Oktay Vural, said on late Wednesday that the party disapproves Deputy Yusuf Halaçoğlu's comments, whereas the party's chairman Bahçeli later said on his twitter account that no one will benefit from exploiting religion for their [political] gains. He said, it is no one's business to determine who believes in what and how.

Prime Minister Ahmet Davutoğlu has also touched upon Halaçoğlu's comments about the CHP being a 'nonreligious party' during his speech on Thursday at AK Party's parliamentary group meeting. He said that Halaçoğlu's statement, in which he established a relationship between a party and religion, cannot be "accepted" in any circumstance and is a "black mark" on Turkish politics. He called on parties to discuss problems they have between each other on their own, without pulling the AK party into such "ill-bred arguments". The Prime Minister has also called on all people who voted for the CHP saying, "AK Party is the assurance of freedom of religion and thought."