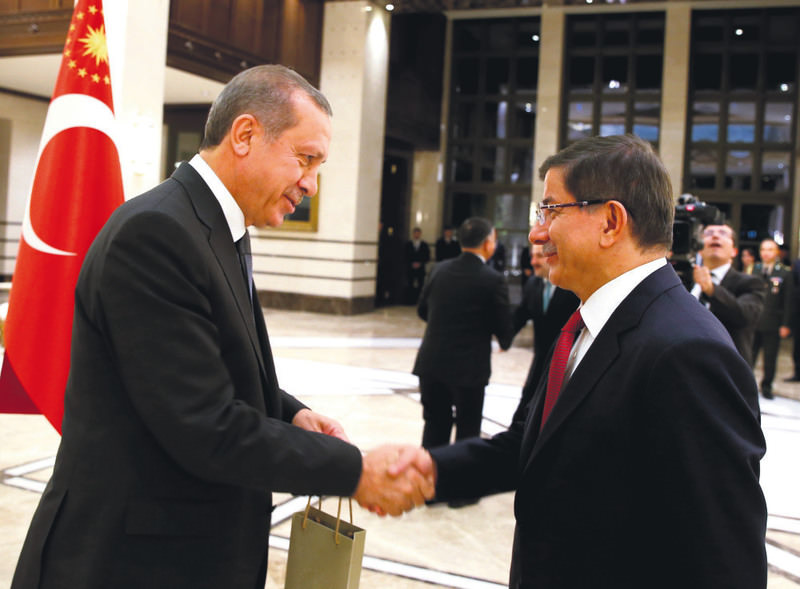 President Erdoğan has asked Prime Minister Davutoğlu to form a government, with Davutoğlu finalizing preparations for official coalition talks. The AK Party has created three commissions with two other sub-commissions for talks with the CHP and the MHP

The negotiations were delayed due to the disagreement between political parties in Parliament over how many members the Parliamentary Speaker's Office should have. After the parties agreed there should be 18 members, deputies yesterday were able to elect the members of the office, paving the way for the start of the coalition negotiations. President Erdoğan and the prime minister met Thursday afternoon at the Presidential Palace where Davutoğlu received the authority to begin the talks.

Davutoğlu, speaking earlier Thursday at the Justice and Development Party's (AK Party) parliamentary group before his meeting with the president, said he would begin the coalition negotiations next week.

The prime minister is scheduled to visit Bosnia-Herzegovina Friday to attend the commemoration ceremonies for the 1995 Srebrenica massacre. Davutoğlu also said his party is ready for coalition talks with other parties but will not make any concessions to pressure and impositions.

First round of coalition talks is expected to be concluded by next Wednesday, Prime Ministry sources said as AK Party delegation will meet with all three opposition parties.

The AK Party has finalized its preparations for the negotiations, but the different political parties' stances on partnerships and their rigidity could lead to the coalition talks being fraught with difficulty. MHP Chairman Devlet Bahçeli has ruled out a coalition with all political parties and added that an AK Party-Republican People's Party (CHP) coalition is more likely, saying that it would be appropriate for those who aim to sustain the reconciliation process.

Although CHP Chairman Kemal Kılıçdaroğlu at first said a coalition with the AK Party was a remote possibility, he recently said in an interview that he is not pessimistic about an AK Party-CHP coalition and described politics as the art of reconciliation and accord.Davutoğlu announced on July 1 that the AK Party has created three commissions, a judicial commission chaired by Mehmet Ali Şahin, an economic commission to evaluate what might need to be done in the economy chaired by Ali Babacan and a political commission that includes sub-commissions that are evaluating scenarios with the MHP and the CHP.

Upon returning from his visit to Bosnia-Herzegovina for commemoration ceremonies of the Srebrenica massacre on July 11, Davutoğlu will begin his official visits for coalition talks. Following the meeting on Thursday, Davutoğlu has 45 days to form a government as stipulated by the Supreme Electoral Board (YSK). Davutoğlu will visit all political parties starting with the CHP, followed by the MHP and finally the Peoples' Democratic Party (HDP). If Davutoğlu's official talks with the parties are unsuccessful after 45 days, the task of forming the government will be given to the Republican People's Party (CHP), which won the second highest number of seats in Parliament. If the CHP is also unsuccessful, early elections will be held.
Last Update: Jul 09, 2015 8:19 pm
RELATED TOPICS