Deployment of armed drones to İncirlik Air Base nothing new, sources say 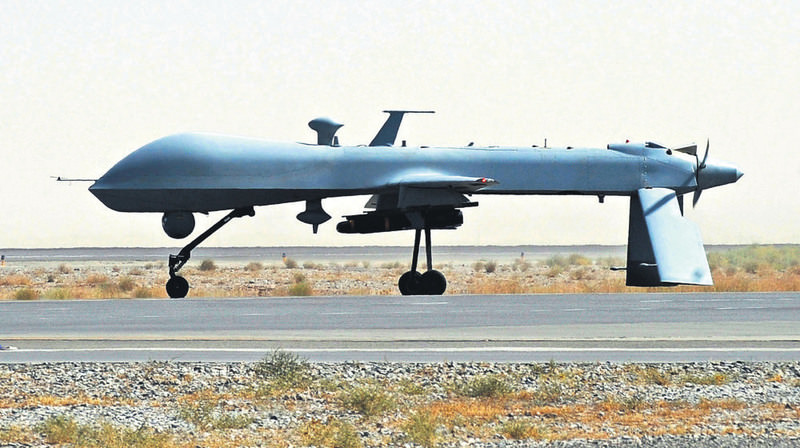 by Ali Ünal Jul 09, 2015 12:00 am
The visit of the U.S delegation led by special presidential envoy for the Global Coalition to Counter the Islamic State in Iraq and the Sham (ISIS), Gen. John Allen, to Turkey wrapped up on Wednesday evening, but echoes of the visit still continue in Ankara.

Several Turkish media outlets reported on Thursday the U.S. delegation of Under Secretary of Defense Christine Wormuth, Gen. Allen and a number of Pentagon officials reached an agreement to deploy armed drones at the İncirlik Air Base in the southern province of Adana as part of the international coalition fight against ISIS. However, sources from the Foreign Ministry said Thursday that the deployment of armed drones to İncirlik was not discussed between the U.S. delegation and Turkish officials led by Foreign Ministry Undersecretary Feridun Sinirlioğlu. "These reports do not reflect the truth. Armed drones were not discussed. In fact, they are already in use, so there is no need to discuss the issue, which has already been solved," a high-level source from the Foreign Ministry said. Speaking to Daily Sabah on May 24, Foreign Minister Mevlüt Çavuşoğlu said there is a principle agreement between the U.S. and Turkey for providing air support and indicated that this agreement includes the use of armed drones from the İncirlik Air Base. Likewise, sources from the Turkish Armed Forces (TSK) also confirmed that armed drones from İncirlik have been in use for months. "The agreement between Turkey and the U.S. to use armed drones was reached in March and they have been in use since then," a military source said.

İncirlik is a key joint U.S. air base used by the Turkish Air Force located outside the city of Adana, some 150 kilometers from the Syrian border. Foreign Ministry sources also reported that Ankara brought several conditions for the deployment of U.S. warplanes to İncirlik. Accordingly, the TSK would like to plan and coordinate airstrikes with U.S officials and also would like to know in advance when and where there is going to be an airstrike against ISIS and whether it will be by drone or military aircraft. Apparently, both sides reached a compromise in the closed-door meetings. "We observe that coalition forces are more sensitive toward Turkey's concerns. This development pleases us," a high-level source from the Prime Ministry said on Tuesday.

Since November 2011, the U.S. air force has been flying unarmed drones from İncirlik Air Base. Last March Syria's military claimed it shot down a U.S. Predator drone over the coastal province of Latakia. The U.S. military confirmed losing communication with a Predator drone over Syria and said it was looking into claims the aircraft was shot down.
Last Update: Jul 09, 2015 7:45 pm
RELATED TOPICS