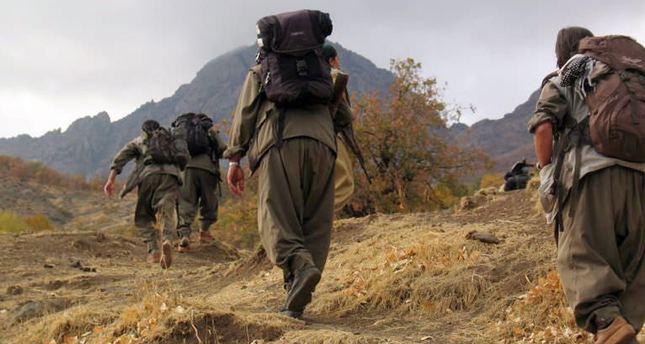 by Daily Sabah Jul 12, 2015 12:00 am
The Kurdish Communities Union (KCK), an umbrella network that includes the PKK, announced on Saturday that the cease-fire which was declared via a message from the PKK's imprisoned leader Abdullah Öcalan in 2013 has ended, dealing a huge blow to the protracted reconciliation process that was expected to speed up with the Peoples' Democratic Party's (HDP) entrance into Parliament.

In a blistering statement, the KCK administration accused the government of engaging in deeds "that could lead to conflicts" and failing to hold on to the cease-fire deal.

"As of now, all the dams and the machines used in the construction of the dams will be the target of our guerilla forces," the statement further read.

Ankara and the HDP have been pursuing a reconciliation process to end the decades-long conflict between the state and the PKK since 2013, but the process has seen serious setbacks prior to the June elections with friction emerging between the mediator HDP and Ankara. The party, which built its election campaign on messages that promised to push forward the stalled peace efforts, failed to abide by its vows once it secured its place in Parliament.

The HDP passed the election hurdle after receiving 13 percent of the votes in the June elections via the support of democrats and liberals, but it was unable to fulfill its assurance of a settlement between the state and the PKK. The blatant intimidation against the government by the KCK has come at a time while expectant HDP voters are waiting for a disarmament announcement.

The KCK accused the government of "exploiting the conditions of a cease-fire by constructing outposts and roads with military purposes, cultural massacre and dams" and claimed in the statement that Ankara was making preparations for a "new war." It called on the workers and contractors to urgently vacate the construction site of the dams, in an apparent bid to intimidate the government.

After claiming that every militant arrest will be countered by the PKK, the KCK further said, "Turkey and Kurdistan should know that our guerilla force will use its right to resist against the construction of the dams and outposts. Our liberty movement will reveal its stance against the policies that leave our Kurdish problem without a solution."

Sources also indicate that the PKK has also been sending threatening letters to the administration of the construction firms that carry out the dam projects. A letter sent to an Ankara-based construction firm dated June 14, 2015 reportedly reads, " You will not choose the subcontractors. We will allow it if you work with firms we choose. If you work with firms close to you, you become a target." The letter was later submitted to the police department.

Some analysts also interpret the KCK's statement as a manifestation of their desire to nix the reconciliation process especially after Ankara revealed its stance against the establishment of a Kurdish state near its border.

The PKK administration, headquartered in the Qandil Mountains, had also previously delivered veiled threats against the government but the latest in a series of these remarks was the harshest among all that indicated an end to the cease-fire.

Meanwhile, two groups of the PKK, consisting roughly of 50 militants, intercepted the Gürbulak and Iğdır roads on Saturday, opening fire on trucks and throwing Molotov cocktails. During the attacks, three trucks were burned down and one Iranian was injured. On Sunday, PKK militants clashed with gendarmerie forces after they seized a vehicle belonging to the municipality of Göle in the province of Ardahan. One person died and two others were injured after the terrorists opened fire on a bus at the scene of the clashes.

Ankara has been pushing the PKK to lay down its arms as part of the reconciliation process but the resistance of the militants to abandon weapons has crippled the process, which is currently on ice.

Turkey truly believed a new page was opened when Öcalan called on the PKK to convene to lay down arms in his annual Nevruz message before the elections, but there has been no attempt or an announcement for the act so far. The HDP, on the campaign trail, adopted peaceful rhetoric in a bid to muster support from circles other than its Kurdish base, but since the elections, instead of HDP officials, the PKK has been more vocal in politics, delivering regular comments and suggestions regarding the HDP. The HDP, stuck in limbo between the PKK and the democrat leftist voters, has been inconsistent in its policies and stance following the elections.

It has also been under pressure to tell the PKK to lay down its arms, but the PKK later released a statement saying it is not up to the HDP or Öcalan to make the call and that it is up to them to make the decision. In saying so, the PKK has undermined the influence of Öcalan, whose call for disarmament was ignored.

The conflict between the government and the PKK, considered a terrorist group by Turkey as well as the U.S. and EU, has been ongoing since 1984 and has resulted in some 40,000 to 100,000 casualties as well as major economic losses for Turkey. The PKK, which aimed to establish an independent Kurdistan in southeastern Turkey, has been headquartered in northern Iraq's Qandil Mountains since withdrawing from Turkey.