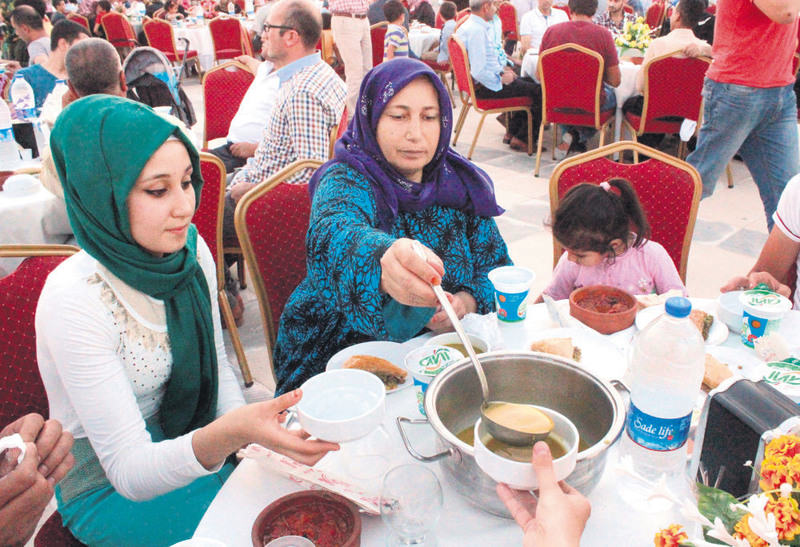 Syrian refugees who have taken shelter in Turkey after fleeing the civil war and ISIS in their homeland, speaking at an iftar program in Şanlıurfa, expressed their gratitude to Turkey for its open door policy. They also said they would only consider returning to Syria if the Assad regime was eliminated

Despite several advancements by Syrian opposition forces in Syria over the last couple of months, though hoping against all hope for the end of five-year civil war, Syrian refugees in Turkey have said that they will not return to their country unless the Assad regime falls. Both men and women, children and adults, feel also quite thankful to Turkey, and President Recep Tayyip Erdoğan in particular, for the country's open-door policy for refugees.

The battles over the last three months won by moderate groups and the Western-backed Free Syrian Army (FSA), which recently made significant gains against the Syrian regime in Idlib and Deraa, are still dealing a huge blow to regime forces in the fiercest clashes since 2012 in Aleppo and Zabadani.

Additionally, following a visit by a large U.S. delegation, including military and intelligence officials, to Ankara on Tuesday to meet with Turkish officials to discuss regional developments, it seems that the U.S. and Turkey are aligning in terms of their Syrian policies. Concerning the train-and-equipment program for moderate Syrian opposition forces, Ankara reportedly suggested that U.S. officials remove the condition to not prioritize fighting Syrian President Bashar Assad's forces and to provide air protection with airstrikes, while they are fighting on the ground following dozens of moderate opposition fighters withdrawing from the program after they refused to sign a contract guaranteeing that they would not fight Syrian regime forces. Since the beginning of the civil war in Syria in 2011, Turkey has had an open-door policy for Syrian refugees. Although refugees, they are happy to be in Turkey and feel grateful to Turkish officials, they want to return to their homeland after the Assad regime is toppled.

At an iftar program of the Justice and Development Party's (AK Party) youth branch in Şanlıurfa on Saturday, refugees spoke to Daily Sabah about their lives and their hope to return to their country.

Jamal, 40, has seven children and has lived in Şanlıurfa's Haliliye district for eight months after he fled from the Islamic State of Iraq and al-Sham (ISIS) in Deir ez-Zor. He is among those who are unemployed in the city's Syrian refugee population, which is the largest in Turkey. Regarding his and his family's lives during Ramadan, he said: "We do not have only our iftars here, but sahurs are provided by the municipality too. We are quite content." He added: "We will never return to Syria unless the Assad regime is gone. He must be ousted."

Along with the unemployed section of the refugee population, working conditions of some of those who have been able to find jobs are also a matter of discussion, including being uninsured and insecure working conditions. A two-part work package has been prepared including a chain of regulations addressing which areas Syrians will be allowed to work, under which conditions and how many workers can be Syrians in certain areas.

Taking care of his family working at a tailor, 13-year old Muhammad said that when he returns to Syria, nothing will be the same, and he has no have hope of continuing his education, which he is not getting in Turkey. "I was a fourth-grade student and I cannot go to school here. If Assad goes in Syria, I still have a hope of returning. He is a bad guy, but Erdoğan is giving iftar to us," he said.

Published last April, a Foundation for Political Economic and Social Research (SETA) report entitled "Turkey's Syrian Refugees: Toward Integration," pointed to the problem of education as the most important challenge in Turkey's Syrian refugee policy. The report says: "In the camps, AFAD [the Prime Ministry Disaster and Emergency Management Agency] facilitates the education of children while UNICEF is also providing school supplies among other kinds of help. Overall, the majority of school-age children are outside schools and despite the efforts of various governments, international and civil society organizations, education remains the most important challenge for refugees in Turkey."

Emine, 54, fled from Aleppo in 2013. She is among those who do not want to return even if the Assad regime falls. "I do not any hope of returning to Aleppo. I had built my house there with blood and sweat. But Assad's missiles turned it into ruins. I cannot go back," she said. She also said that she thinks Erdoğan is "a better leader than those in the entire Arab world" because she could take shelter in Turkey after she was refused it in Lebanon and other counties taking refugees.

"I am pleased with Turks here, too. But home rental prices are expensive and I am troubled with high electricity and water bills," she said.

Turkey, already the country with the largest refugee population in the world with 1,805,255 out of the estimated four million who have fled the conflict, is now home to around 45 percent of all Syrian refugees in the region, according to a recent U.N. High Commissioner for Refugees UNHCR report. Fourteen percent of Syrians in Turkey live in refugee camps that were built by the government. The rest are scattered around Turkey, particularly in border provinces and Istanbul.
Last Update: Jul 13, 2015 8:09 pm
RELATED TOPICS