I’ll confront any coalition aiming to halt the development of Turkey: President Erdoğan 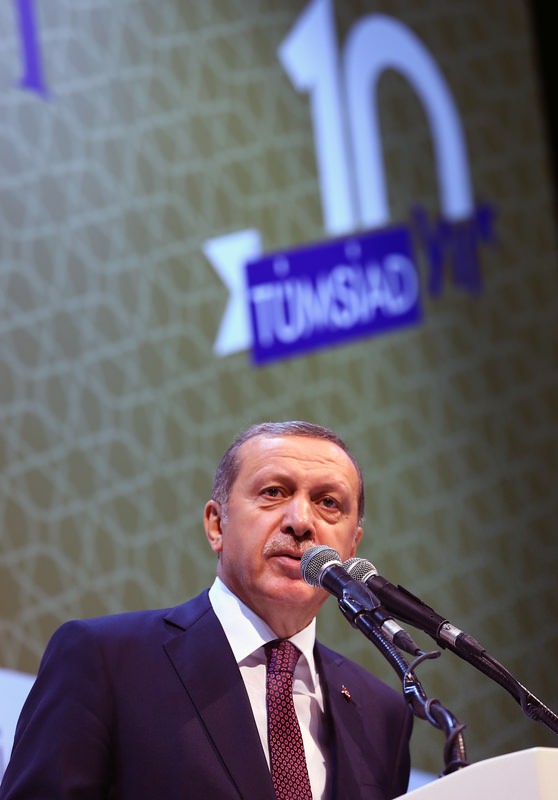 President Recep Tayyip Erdoğan stated that he will confront a coalition that aims to cease the ongoing development steps of Turkey and pointed to possible snap elections, saying "the nation is the only authority to decide its future"

President Recep Tayyip Erdoğan gave a speech on Monday at the iftar dinner program organized by the TUMSIAD Businessmen Association in Istanbul. Emphasizing that he has never misused any of his constitutional rights or powers since he was elected president last year, he said that he will strongly confront any coalition option that aims to cease the construction of the third airport or the third cross-continent bridge in Istanbul.

Saying that every citizen has to be ready for bigger struggles for Turkey, Erdoğan said that there is ongoing violence in the region and all over the world. Criticizing the governments that help violence spread, he said "We can only maintain our existence by striving against violence, fear and wars. We have to be hopeful for the future. Despair has never been and is not an option for believers, as Allah the Almighty says in the Qur'an 'So do not weaken and do not grieve, and you will be superior if you are true believers'. We have to fight against oppression, violence and wars until justice is established."

Touching upon the coalition talks, the president said "A coalition government should be formed upon this understanding."

"If political parties bicker with each other and other authorities, then it harms Turkey instead of benefiting it," he added.

Erdoğan further added that he wishes and waits to see the formation of a new government as soon as possible. The president also stated that the Turkish nation is the sole authority to determine its future in a possible snap election.

Erdoğan also criticized the pro-Kurdish Peoples' Democratic Party (HDP) leader Selahattin Demirtaş for the comments he made about the attacks that took place in two of Turkey's eastern provinces.

"Have you heard him [HDP Leader Selahattin Demirtaş] questioning the PKK terrorist attacks?," the president asked the audience at the dinner.

About HDP's denial that it had no "organic" links with the PKK terrorist organization, Erdoğan said: "They have inorganic relations, not organic."

Earlier on Monday, Turkish premier and AK Party leader Ahmet Davutoğlu concluded his meeting with Republican People's Party (CHP) leader Kemal Kılıçdaroğlu as part of the efforts to form a new government in the country.

Davutoğlu is next scheduled to meet the leader of the Nationalist Movement Party (MHP), Devlet Bahçeli, on Tuesday, and the Peoples' Democratic Party (HDP) co-chairs, Selahattin Demirtaş and Figen Yüksekdağ, on Wednesday as part of the first round of coalition talks to form a government partnership.

President Erdoğan had asked Davutoğlu to form a new government on July 9.

Davutoğlu, whose party gained the largest share of parliamentary seats (258) that is 18 short to muster a 276-seat simple majority in the June 7 general elections, now has 41 days left to form a government with another political party represented in the Grand National Assembly of Turkey (TBMM).

As the party needs 18 extra seats to form a government, it has to attempt to forge a coalition with one of the three parties represented in the parliament - the CHP (132 seats), the MHP (80 seats) or the pro-Kurdish HDP (80 seats) . Either the nationalist MHP or the left-leaning social democrat CHP are likely to be Davutoğlu's preferred partners.

If he is unable to form a coalition, tradition dictates that the president should grant the leader of the second party's leader, Kemal Kılıçdaroğlu the mandate to form a coalition government with other parties within another 45-day period. Should this option also fail to provide Turkey with a governing coalition, the president will most probably call for a snap election and appoint a prime minister within five days to form an interim government consisting of representatives from all four parties.