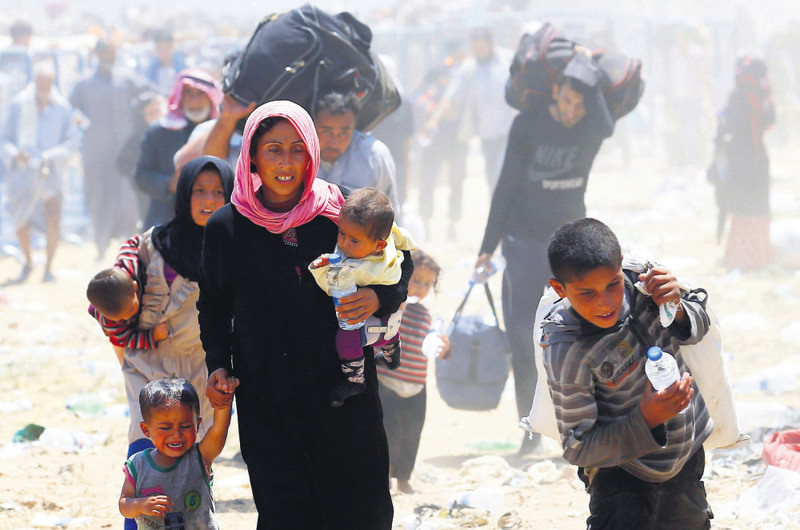 by Mehmed Cavid Barkçin Jul 14, 2015 12:00 am
U.S. ambassador to Turkey John Bass had previously said that the U.S. and Turkey share the same point of view regarding the territorial integrity of Syria and the safe return of the displaced population. He added that they had conveyed these principles to the Democratic Union Party (PYD) and had urged its members to respect these principles. While the U.S.'s sensitivity to Turkey's concerns was "pleasing," according to some high-ranking government officials, the continuous influx of Arab and Turkmen refugees to Turkey arose skepticism for some regarding the PYD. According to sources at the Disaster and Emergency Management Agency (AFAD), on July 13, 405 ethnic Turkmen and Arab Syrians from a couple of villages in the Tal Abyad region fled from the PYD to Akçakale border gate.

A recent influx of approximately 24,500 Syrian Arab and Turkmen refugees, according to information obtained by AFAD, as the aftermath of clashes between the Islamic State of Iraq and al-Sham (ISIS) and the PYD's People's Protection Units (YPG) in Tal Abyad had raised concerns for Ankara. In accordance with its concerns, in the previous week during an evening reception for members of the media, AFAD President Fuat Oktay said that only 4,000 of the approximate 24,500 refugees had returned to Tal Abyad while the rest were afraid of returning after the PYD had removed ISIS from the town. Oktay also warned that the clashes between the groups in the Aleppo province may cause the movement of 4.5 million people, causing 100,000 of them to take refuge in Turkey within 24 hours.

Interim Prime Minister Ahmet Davutoğlu, in a recent statement, said that they were in touch with the U.S. military and diplomatic committees and were cooperating with them to find solutions regarding the country's internal conflicts. Davutoğlu said that the support for the Free Syrian Army (FSA), helping it to increase its activity, was crucial and Ankara was determined on this subject. He added that the PYD's activities near the Turkish border posed a threat to the country's national security, along with ISIS's activities. Davutoğlu said that the Kurds were in the minority in Aleppo and they did not want a scene reminiscent of Tal Abyad after its capture by the YPG, highlighting the alleged ethnic cleansing in the region, which was also the purported cause of the recent refugee influx. Davutoğlu signified that similar to ISIS, when the YPG seizes a town or province, everyone except Kurds flee the region. However, he said when the moderate opposition captures a town, it harmonizes with the people of the region and does not cause an influx of refugees.

The Kurdish advance that was backed by Syrian opposition forces on the ground and U.S-led airstrikes, handed over the control of ISIS to PYD forces in less than a week, and the capture became a matter of concern for Ankara, which claims there is an intentional demographic change in the domain supported by the U.S-led coalition. Turkey voiced its reservations that the operation against the strategic Syrian towns, not least Tal Abyad, could be a Kurdish aspiration to force out the ethnic Arabs and Turkmens in the region to form a "buffer state" run by the PYD, which Turkey bills as an extension of the PKK in Turkey.

Tal Abyad lies between two Kurdish-controlled cantons, Kobani and Jazeera, so its capture is of strategic importance as it opens a supply route between the two spots, triggering Turkish fears that such bridging will ramp up Kurdish power in the region and will ultimately pose a threat to the security of Turkish territory. President Recep Tayyip Erdoğan previously said he was worried that the PYD and the PKK were filling the vacuum left behind after ISIS receded, and that it could "create a structure" near its borders that might threaten the country.

"We don't have such an intention, plan or a policy. The U.S is against the change of borders in that region," Bass had previously told Turkish media. Unsettled by the reports carrying the allegations, Bass continued: "The U.S. strongly supports the territorial integrity of Turkey, Syria and Iraq. But we think the greatest threat to Syria's and Iraq's territorial integrity and unity is ISIS. We press the militants to diminish their power."
Last Update: Jul 14, 2015 7:54 pm
RELATED TOPICS