No lessons have been taken from Srebrenica: President Erdoğan 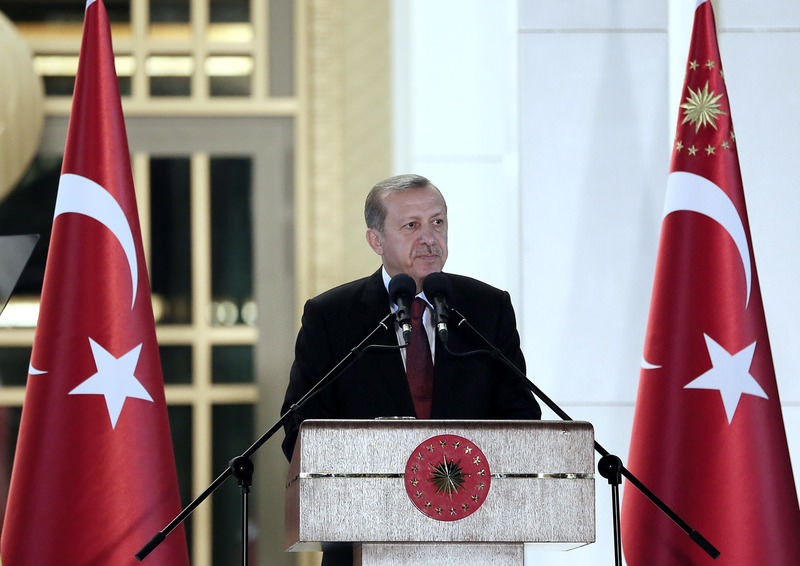 by Emre Başaran Jul 15, 2015 12:00 am
President Recep Tayyip Erdoğan drew attention to the anniversary of the Srebrenica massacre and long-standing Syria crisis and said that he wished the violence, wars and massacres all over the world and in the region would come to an end in a speech he gave at the Presidential Palace on Tuesday during an iftar dinner.

Emphasizing that as a month of fraternity, brotherhood and mercy, Ramadan is the perfect time of repentance and purification of the soul, he said "This year's Ramadan has been bittersweet with violence and massacres targeting Muslims all over the world."

Stating that the whole Turkish nation is closely following the humanitarian crimes being committed in neighboring Syria, he added "The ongoing clashes in our neighbors Iraq and Syria, the Assad regime's barrel bombs targeting civilians, especially women and children, and violent attacks of DAESH deeply saddened us during such a spiritual time of the year," he said, using a different acronym for ISIS.

Reminding the audience of the anniversary of the Srebrenica massacre in which 8.372 innocent Muslim Bosnians were inhumanely slaughtered in the leadership of "Butcher of Bosnia" Ratko Mladić, he said that the Turkish nation remembers the genocide with grievance.

Slamming the international communities because of their silence to the violence of Syrian dictator Bashar al-Assad, he likened the recent situation of the country to the Bosnian War. "20 years ago, the Butcher of Bosnia Ratko Mladić killed 8.372 innocent Muslim Bosnians in Srebrenica. Nowadays, 'The Butcher of Syria', Bashar al-Assad is killing thousands of innocent civilians, women and children day by day with barrel bomb attacks and international communities are completely silent about the matter," he said. "In the Bosnian War, more than 300.000 people were killed and two million people were forced to leave their homes. In Syria, more than 300.000 people have been killed so far and four million people have been forced to leave their country, half of which we host here in Turkey. There are six million internally displaced people within Syria. It appears that no lessons have been taken from the sorrowful memories of the Srebrenica genocide," the president added.

Touching upon the ongoing massacres and violence all over the world, he said "There are millions of oppressed people worldwide, not only in Syria, but also in Palestine, Egypt, Libya, Myanmar and Somalia. I want to put this more clearly: human life cannot be sacrificed for any price, aim or interest."

Calling upon the United Nations Security Council member countries to take action against violence all over the world, he underlined that Turkey has always done and always will do its best to help the oppressed.

Emphasizing that Turkey has come a long way during the last 12 years, he praised the nongovernmental organizations for their help during that process.

Saying that he wishes to see a self-confident Turkish youth, the president added that nongovernmental organizations can lead to a brighter future. "We are trying to strengthen the peace and fraternity in our country. Yet this cannot be achieved with only our efforts, every Turkish citizen should try to contribute to peace within the country. We cannot accept discord in Turkey. We have to respect each other and live together in peace," he said.

Slamming the parallel state structure widely known as the Gülen Movement which is led by Fethullah Gülen who lives in Pennsylvania on self-imposed exile, he said "They stole the earnings of our nation in the name of charity and spent them to finance Turkey's enemies. They spent the money they collected from our innocent people on gambling and earthly pleasures. We have to struggle against this structure with all of our will and power."

Before finishing his speech, he said that he wishes the political parties in the parliament reach a common ground and provide Turkey with a governing coalition. "I will do my best to support the efforts to form a government as the President. I expect all party leaders to ease the process and show sensitivity to form a government as soon as possible. Before finishing my speech, I would like to say that I wish we will all mark the upcoming Eid al-Fitr in peace," added Erdoğan.