Turkey will be on the side of oppressed, President Erdoğan says in Eid al-Fitr message 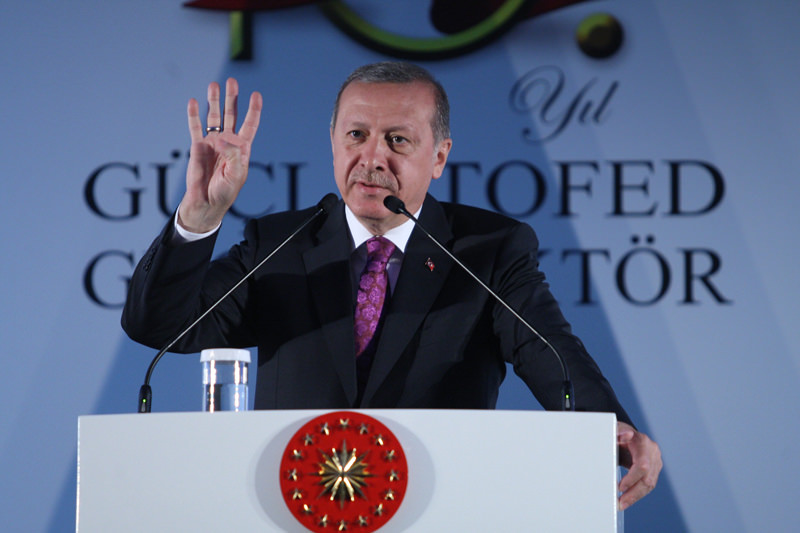 by Mehmet Çelik Jul 16, 2015 12:00 am
President Recep Tayyip Erdoğan has issued a message on Thursday celebrating the nation's Eid al-Fitr, the Muslim religious holiday which marks the end of holy month of Ramadan, emphasizing the importance of unity for the Muslims and standing by the oppressed people of the world.

"Thankfully we have reached another Eid, in which we will embrace each other as a nation with love, while leaving behind the mercy and blessings of the holy month of Ramadan," the president said.

"Our nation has established states, which left the marks of our civilization throughout history, over a wide geographical area. Today too, by taking place alongside our brothers in difficult times, I believe that we will leave a mark on history, which will be the pride of humanity. Eid al-Fitr will enable our nation's unity around this understanding," the president added.

President Erdoğan also touched on the tragedy of the war-torn countries in the Middle East and Africa, stating that the joy of Eid al-Fitr has been overshadowed by the pains of the people who are at war.

"Unfortunately, many parts of the Muslim world welcome this festival with wounded hearts and tearful eyes. The pain and situation of our brothers in these countries, particularly in Iraq, Syria, Palestine, Yemen, Egypt, Libya and Somalia, overshadow our joy. Hopefully, these blessed days will become a cause for the salvation of our brothers and a reason for humanity to be looking forward to the future in peace and security of all mankind to be looked forward to the future. As we always do, as a country and nation, with our public institutions and NGOs, we tried to be in solidarity with our brothers and sisters around the world during Ramadan without any discrimination, in an effort to extend the hand of assistance," the president said.

The president added that 'democracy, human rights, respect for values such as faith, are literally being trampled underfoot in many parts of the world'. He continued to state that the international institutions and the Western countries have lacked action against stopping the decades long tragedy and injustice in Palestine and remained silent when hundreds of thousands died in Iraq and Syria in recent years for the sake of protecting their own interests.

"In such an environment, Turkey, with the strength and responsibility it bears from its culture, history, and conscience, has been putting an effort to be in line with the truth, the right, and the protection of human values," President Erdoğan concluded.