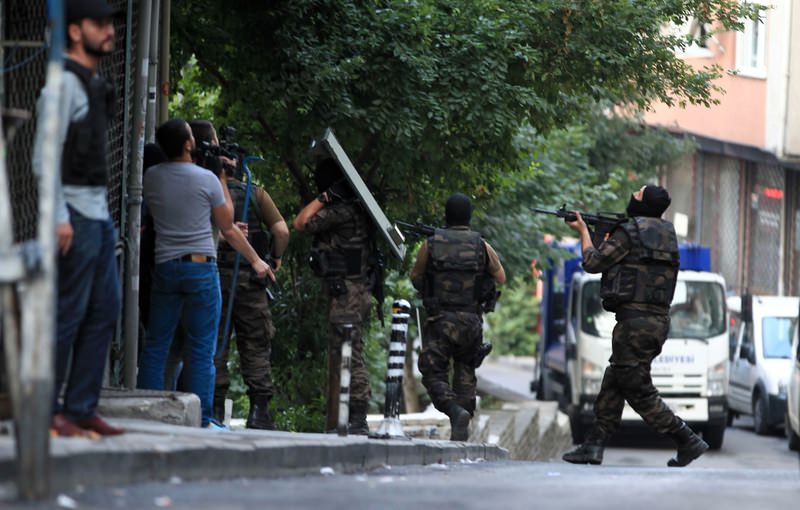 A counterterrorism unit raiding a location in Istanbul in the early hours of Friday.
by Mehmet Solmaz Jul 24, 2015 12:00 am

The escalating violence committed by ISIS militants prompted an immediate response from Turkey, which launched airstrikes against their positions early Friday. The number of militants killed in the operation was 35, and Turkey has given the go-ahead for further strikes to avert any danger posed by ISIS

The Turkish military launched airstrikes against the Islamic State of Iraq and al-Sham (ISIS) in Syria for 13 minutes early Friday, killing at least 35 militants and destroying two ISIS headquarters and one rallying point with guided missiles. President Recep Tayyip Erdoğan said the aerial operation on the Turkey-Syria border is just the beginning and Turkey will do whatever is required to protect its citizens. "Our citizens should not live in an atmosphere of fear. If they [the terrorists] are walking with guns, then there is security vulnerability," Erdoğan said. Prime Minister Ahmet Davutoğlu pledged the same day to take every measure against threats targeting the country's borders, including those from groups such as ISIS. "All precautions will be taken without further order if any terrorist organization approaches the borders of the Republic of Turkey in a threatening way," he told reporters after a visit to Turkey's Council of State on Friday in the capital, Ankara. Erdoğan also added that İncirlik Airbase in the eastern province of Adana will be used against ISIS within certain parameters.

This was the first official statement made by the president regarding the İncirlik agreement with the U.S. Turkey will allow the U.S. to use the base for military airstrikes against ISIS.

The remarks of both Erdoğan and Davutoğlu followed early-morning airstrikes by the Air Force on ISIS targets in Syria. Three F-16 fighter jets took off from the southeastern Diyarbakır 8th Main Jet Base at 3:12 a.m. and hit two ISIS headquarters and one rallying point inside Syria with guided missiles from 3:40 a.m. to 3:53 a.m., the Prime Ministry said in a statement.The operation was named after Yalçın Nane, a non-commissioned military officer who was killed during the Army's first gunfight with ISIS on the border in the province of Kilis on July 23. ISIS targets were located near Syria's Havar village, which is located across the border province of Kilis. The jets launched their missiles from Turkey without entering Syrian airspace, according to the statement. The decision was taken at a special security meeting in Ankara late July 23, hours after the clash on the border.

During his speech, Davutoğlu stressed that ISIS positions were destroyed in Friday's operation, and emphasized that Thursday's cross-border shootout gave Turkey the right to exercise self-defense. He underscored that the operation was the result of a decision Turkey took for its own national security. "The operation against ISIS achieved its goal and will never stop as we observe movement on or near the Syrian border at any moment," he said. Meanwhile, "There are parallels between the PKK and ISIS attacks in Turkey," he said. Davutoğlu added that 297 suspects including 37 foreigners were detained in 16 provinces during nationwide counterterrorism raids.

Violence has been escalating in Turkey committed by both ISIS and PKK militants, prompting Ankara to tighten its measures against terrorism and conduct operations to eliminate the threats against its national security.

On Monday, a suicide bombing in the border town of Suruç killed at least 32 people while a crowd of roughly 300 young activists gathered in the garden of the Amara Culture Center before they planned to set off for the Syrian town of Kobani to assist in its reconstruction. The youngsters, who were members of the Federation of Socialist Youth Associations (SGDF), were chanting slogans and preparing to make a statement when the blast ripped through the assembled group. Turkish officials said the suspect who blew himself up was identified and revealed to be affiliated with ISIS. The incident triggered further violence by the PKK which retaliated against the attack a day after by killing two officers at their home. On Wednesday, the PKK killed two civilians claiming they were members of ISIS. They also clashed with two officers in Diyarbakır the same day, killing one of them.