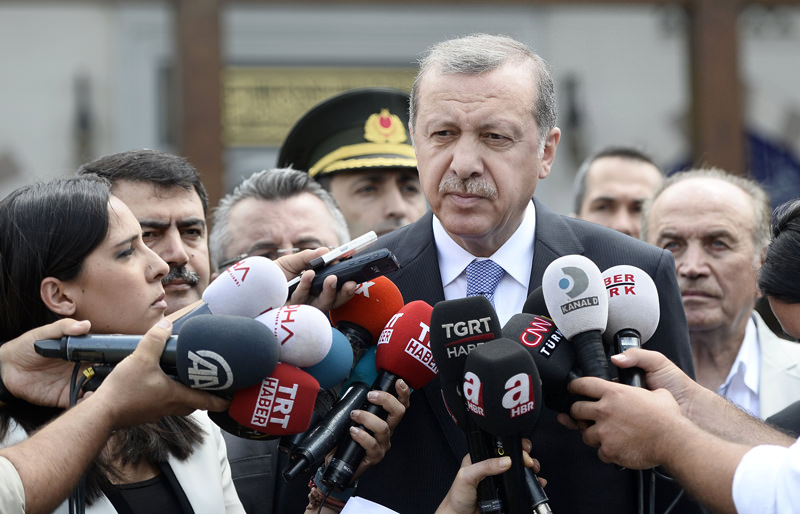 by Daily Sabah Jul 24, 2015 12:00 am
President Recep Tayyip Erdoğan said in a live press conference after the Friday congregational prayer he attended in Istanbul that the aerial operation on the Turkey-Syria border is just the beginning, and Turkey will do whatever is required to protect its citizens.

"Our citizens should not live in atmosphere of fear, if they [the terrorists] are walking with guns then there is a security vulnerability," President Erdoğan said.

Erdoğan also confirmed that the Incirlik Air Base in eastern Turkey will be used against the self-proclaimed Islamic State of Iraq and al-Sham (ISIS) within a certain framework.

This was the first official statement on the Incirlik agreement with U.S. that the president of Turkey made. Turkey will allow the U.S. to use the Incirlik Air Base in the Adana province for military strikes against ISIS. However President Erdoğan did not elaborate on details of the agreement.

Erdoğan also added that the militant groups must lay down their weapons or "face the consequences".

The Turkish military carried out airstrikes against ISIS in Syria for 13 minutes early today, destroying two ISIS headquarters and one rallying point with guided missiles.

Three F-16 fighter jets took off from the south-eastern Diyarbakır 8th Main Jet Base at 3:12 a.m. and hit two ISIS headquarters and one rallying point inside Syria with guided missiles from 3:40 a.m. to 3:53 a.m., Turkish Prime Minister's Office said in a statement.

The operation was named after Yalçın Nane, a non-commissioned military officer who was killed during Turkish army's first gunfight with ISIS on the border in the province of Kilis on July 23.

ISIS targets were located near the Havar village of Syria, which is locatedacross Turkey's Kilis province on the border. The Turkish jets launched their missiles from Turkey, without entering the Syrian airspace, according to the statement.

The decision was taken at a special security meeting in Ankara late July 23, hours after the clash on the border.