Turkish FM: Turkey in favor of continuing reconciliation process but will not tolerate terrorist acts 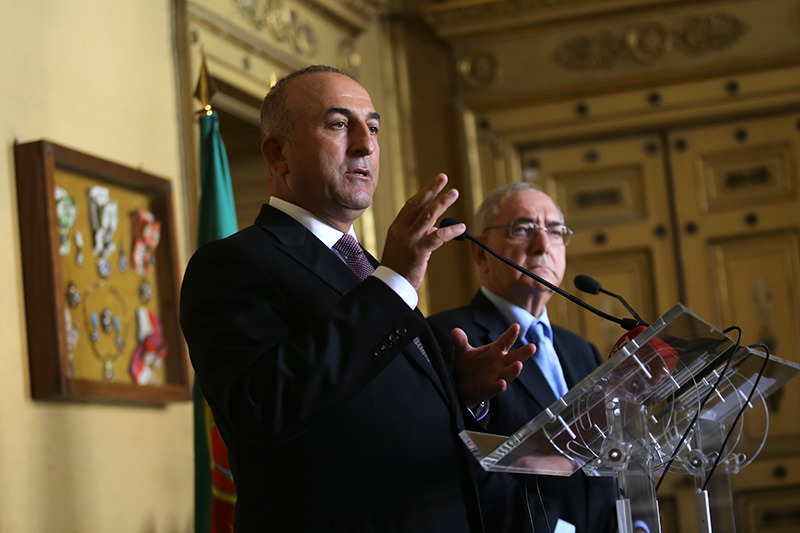 Cavusoğlu's comments came at a joint press conference with his Portuguese counterpart Rui Machete in the Portuguese capital of Lisbon Monday.

"We expect the HDP to act like a political party and cut its ties with the terrorist PKK (Kurdistan Workers' Party)," he said, adding that the HDP not only failed to condemn the recent terrorist acts allegedly committed by the group, but also supported it.

Last Wednesday, two police officers were found shot dead at their shared home in Turkey's southeastern Ceylanpınar district -- an attack for which the PKK terrorist organization claimed responsibility. A day later, another policeman was killed in a gun attack in Diyarbakır.

On Friday, another police officer was kidnapped as he was heading from Mardin to Muş with his family on the Diyarbakır-Bingöl Highway.

All these attacks prompted Turkey to start operations against ISIS and the PKK in northern Syria and Iraq, which Çavuşoğlu said were "carried out within the framework of international law and UN resolutions," and "care is taken to ensure that civilians are not affected in the process".

Çavuşoğlu said that neither the PKK nor the HDP "reciprocated the sincere steps taken by the government during the reconciliation process," referring to a government initiative launched in 2013 to end the decades-old conflict with the PKK in the country's eastern and southeastern regions. The process resulted in a call for a congress for disarmament from the jailed PKK leader Abdullah Öcalan in February.

"However, the PKK has ramped up its terrorist acts after the [June 7] election. They should make a choice: democracy or terrorism? Peace and solution or clash?" Çavusoglu said, adding that the Turkish government was still in favor of finding a solution and continuing the reconciliation process, but "this does not mean that we will tolerate terrorist acts that disrupt public order".

Çavuşoğlu also said that it was unacceptable for a political party leader to invite people to take to the streets, referring to HDP co-chairman Selahattin Demirtaş, who called on the Kurds to take up arms and ensure their own security following last Monday's suicide bombing in the southeastern border town of Suruç that killed 32 activists.

"No democratic country can tolerate this. Public order is essential," he said.

Noting the recently increased security threats in the region, the Turkish foreign minister called for NATO support in the fight against terrorism, saying ISIS was a "common enemy".

"We expect our NATO allies to stand united and support the fight against the security threats in the region," he said.

NATO officials are to meet in Brussels Tuesday at Ankara's request, when Turkey will inform its allies about the security measures it is taking amid the recent anti-terrorist operations.

Portuguese Foreign Minister Rui Machete said that Portugal appreciated Turkey's determination in its fight against the terrorist groups in the region, adding that international terrorism still constituted a big threat against world peace and security.

"You need to work with international partners in the fight against terrorism. Global terrorism requires a global military struggle. You must not show flexibility when fighting against terrorist groups such as the ISIS with whom it is impossible to establish dialogue," Machete said.