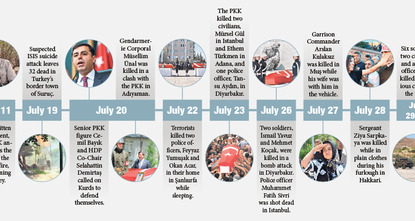 In the wake of PKK attacks increasingly escalating since the June 7 general elections despite the cease-fire between the PKK and the state, Ankara showed its determination to fight against any kind of terrorist act, which was misinterpreted by some as disrupting the cease-fire and the reconciliation process.

Although there was a cease-fire between the PKK and the state, more than 2,000 acts of violence by the PKK have been recorded since the beginning of 2015. In addition to these, during the period from the June 7 elections to the night of airstrikes on the Qandil Mountains in northern Iraq last Friday there have been 121 attacks such as arson. Meanwhile, three civilians, two soldiers and three police officers were also killed.

After the pro-Kurdish Peoples' Democratic Party (HDP) acquired 80 deputies in Parliament, passing the 10 percent national election threshold, an acceleration in the reconciliation process was expected. The reluctance of the HDP, however, to make the PKK lay down arms, as it had promised during the election campaign, has brought unease to the region.

The Kurdish Communities Union (KCK), an umbrella network that includes the PKK, announced on July 11 with a statement that the cease-fire declared in 2013 had ended. The KCK threatened Ankara, saying: "As of now, all the dams and the machines used in the construction of the dams will be the target of our guerilla forces,"

A suspected Islamic State of Iraq and al-Sham (ISIS) suicide attack in Turkey's border town of Suruç left 32 dead, which was a turning point in stirring up the country. A day after the attack in Suruç, senior PKK figure Cemil Bayık and HDP Co-Chair Selahattin Demirtaş spoke with one voice, calling on Kurdish communities to defend themselves. On the very same day, Gendarmerie Corporal Müsellim Ünal died in a clash with the PKK in Adıyaman. Since that day, 16 police officers and soldiers have been killed in attacks.Standing up against these "conscious, malicious and planned" attacks, as Prime Minister Ahmet Davutoğlu defined them, Ankara began airstrikes on PKK positions, which were misinterpreted by some foreign politicians who claimed Turkey disrupted the cease-fire and the reconciliation process.

Speaking to Daily Sabah about the aforementioned misinterpretations, renowned Kurdish writer and columnist Orhan Miroğlu said that they, from time to time, practice double standards on terrorist acts in the country without imagining what they would do in the case of an active terrorist organization not only in rural areas, but also in the cities.

Concerning the attacks that have occurred in the past two years, when there was a cease-fire and reconciliation process, Miroğlu said that the Justice and Development Party (AK Party) had always been eager to continue with the process. Europe, however, never mentioned it enough, he said.

In addition, the government has said ending the reconciliation process will only cut dialog with the PKK but democratization steps for the country's Kurds will continue.
Last Update: Aug 01, 2015 1:27 pm