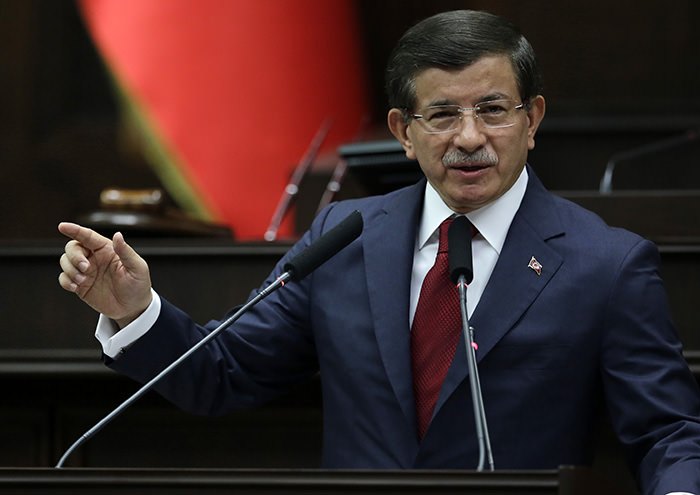 |AA Photo
by Anadolu Agency Aug 01, 2015 12:00 am
Turkish Prime Minister Ahmet Davutoğlu has said Turkey has every right to respond to terrorist acts.

In remarks expressed in an article for the Washington Post daily published on Friday, Davutoğlu said: "All terrorist organizations that target Turkey must know that their acts will not go unpunished and that we will respond to their acts with full resolve, as we have every right to under international law."

The prime minister outlined Turkey's stance against terrorism, particularly against ISIS and the outlawed PKK terrorists.

He also clarified that Turkey's resolve to act against alleged PKK terrorist acts did not mean that the "reconciliation process" was over. "[We are] determined to take it [reconciliation process] forward" to its logical end once a new government is in place in Turkey, he added.

The "reconciliation process" refers to the 2013 initiative of the AK Party government that aims to end the decades-old conflict with the PKK, which has claimed the lives of more than 40,000 people.

He said that the process with PKK could not resolve until PKK militants laid down their arms, ended their violent attacks and removed their armed elements from Turkey.

"PKK terrorism must stop and it should take its armed elements out of Turkey," Davutoğlu said.

"As our history teaches [us], we will always look for ways to peacefully resolve potential conflicts. But when we are threatened, we will act unreservedly, with every means at our disposal, until the enemy is defeated," he added.

The premier said that Turkey had always put diplomacy at the center of its international relations but was also aware that not all problems could be solved diplomatically. "[Turkey is determined to] meet the terrorist threat when and where it presents itself," he said.

About Turkey's partnership with the U.S.-led coalition against ISIS, he said that it aimed to "take the fight more effectively to the terrorists".

He said that when ISIS is pushed back from Turkish-Syrian borders, it would not only degrade the militant group but also provide "a lifeline to the moderate Syrian opposition who are the only actors on the ground fighting both the Assad regime and ISIS".

Holding the Assad regime responsible for the current chaos that "led to the emergence of ISIS", Davutoğlu said that a political change based on the principles of the 2012 Geneva Communique must be reached soon.

"This is the only way more large-scale bloodshed can be prevented," he said.

Davutoğlu's remarks come as Turkish security forces pursue a nationwide counter-terrorism operation on groups such as ISIS, the PKK and the leftist Revolutionary People's Liberation Party-Front (DHKP-C), which have seen over 1,300 suspects detained in 39 provinces since July 24 after last week's ISIS bombing in Suruç and later wave of deadly attacks on security forces by the PKK.