AK Party, CHP to meet for last round of coalition talks 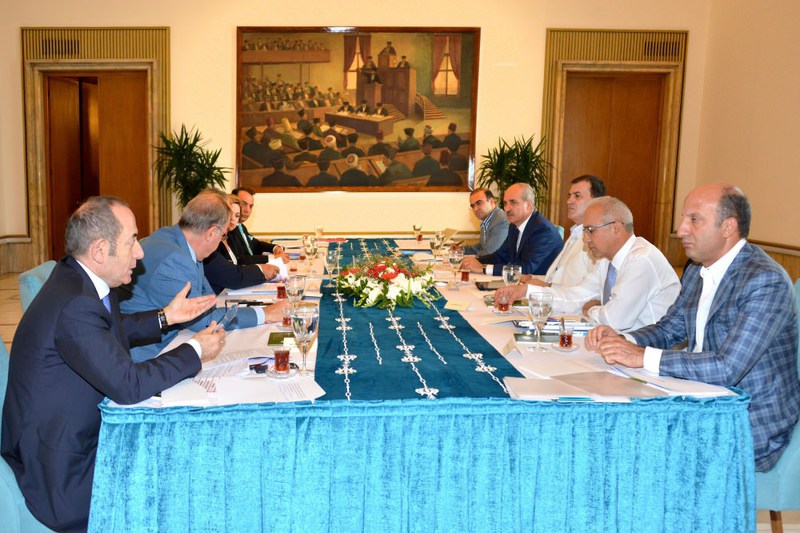 by Merve Aydoğan Aug 02, 2015 12:00 am
Following the fourth exploratory meeting between Justice and Development Party (AK Party) and the Republican People's Party (CHP) delegations on Saturday, Culture and Tourism Minister Ömer Çelik and CHP Deputy Chairman Haluk Koç both pointed out that the formation of a coalition government will be decided by the party leaders along with the authorized party communities.

The delegations will meet for the last time for exploratory talks on Monday at the Ankara Palace. Interim Prime Minister and AK Party Chairman Ahmet Davutoğlu and CHP Chairman Kemal Kılıçdaroğlu are to meet to discuss a coalition government following the Supreme Military Council (YAŞ) meeting, which will convene Turkey's top civil and military officials in Ankara between Aug. 3 and Aug. 5.

As Davutoğlu has said that the AK Party will re-launch coalition negotiations with the Nationalist Movement Party (MHP), some have claimed that the CHP and AK Party delegations have turned a cold shoulder to each other. In this regard, Saturday's meeting was the shortest meeting of all the exploratory meetings, lasting for nearly three-and-a-half hours. According to local sources, the CHP delegation urged the AK Party delegation to decide on which party it wants to form a coalition with due to recent remarks from AK Party officials signaling a possible coalition with the MHP.

Speaking to the press on Saturday after the meeting, Koç said that his party began coalition meetings under the framework of the CHP's 14 conditions and the topics of the fourth meeting included the Kurdish issue and the reconciliation process, requests of different religious groups, public administration and media administration.

For the AK Party, Çelik said that the meetings are not performed to agree on any topics, but only to seek trust and that no agreement is made until all topics are agreed on. Commenting on the recently increasing terror activities by the PKK, Çelik claimed that the AK Party was left alone when it was urging all political parties to take high capacity combat against terrorism and terrorists in efforts to protect the nation and democracy. In regard to the AK Party's continuing talks with the MHP, Çelik underlined that it was no secret and that the CHP was aware of this from the beginning; however, he stressed that there is no exploratory meeting with the MHP, as is currently going on with the CHP.

Davutoğlu and Kılıçdaroğlu are expected to meet on Thursday or Friday at the latest to finalize the coalition talks.
Last Update: Aug 02, 2015 9:51 pm
RELATED TOPICS