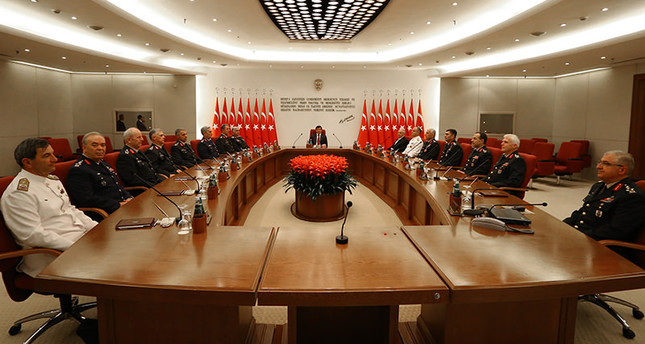 by Daily Sabah Aug 04, 2015 12:00 am
The Supreme Military Council (YAŞ), chaired by Prime Minister Ahmet Davutoğlu, convened at the headquarters of the General Staff with the participation of the country's top civil and military officials on Monday.

The members of the council, who arrived at the military headquarters following a visit to Turkey's founder Mustafa Kemal Atatürk's mausoleum, were greeted by the Chief of General Staff Gen. Necdet Özel.

The meeting is expected to address a number of subjects regarding the TSK including promotions, appointments, extension of tenures and the discharge of military personnel for disciplinary action and immorality.

The threat imposed by the "parallel structure" – referring to the Gülen Movement – as well as military personnel who are allegedly affiliated with the movement will also top the YAŞ meeting discussions. Moreover, the ongoing investigation of over 1,000 allegedly Gülenist military personnel, increasing terrorist activities and operations against them are also expected to be covered.

As his four-year term as commander is coming to an end, Özel will attend the meetings for the last time. While his term ends on Aug. 30, Özel is preparing to retire 10 days in advance to provide more time for the adjustment of his successor due to the critical nature of the ongoing operations against the Islamic State of Iraq and al-Sham (ISIS) and the PKK. As a part of his farewells, he visited Republican People's Party (CHP) Chairman Kemal Kılıçdaroğlu on Thursday and will visit Nationalist Movement Party (MHP) Chairman Devlet Bahçeli on Friday.

According to TSK precedents, Özel is to be replaced by Akar. Meanwhile, either Güler or the commander of the 1st Army, Gen. Salih Zeki Çolak, are expected to fill the post that will be vacated by Akar. Similarly, it is anticipated that the commander of the Aegean Army, Gen. Galip Mendi, will replace Atay, as his term is also coming to an end.
Last Update: Aug 04, 2015 12:45 pm
RELATED TOPICS