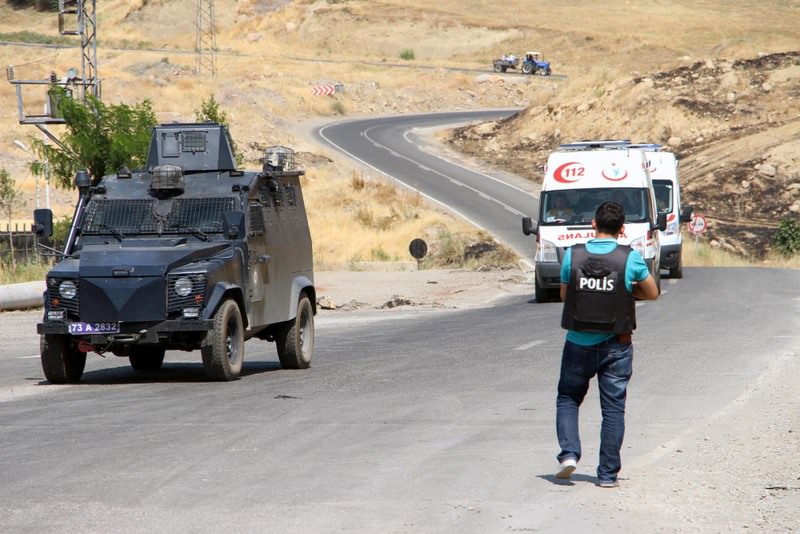 Southeastern provinces saw many terrorist attacks by the PKK on Tuesday. Two soldiers were killed in one attack on a military vehicle in Şırnak and another soldier was dead after a rocket attack by the terrorist group

In of the incidents, a group of terrorist attacked a military unit with a rocket launcher in Silopi district of Şırnak. In an another attack in the province, two soldiers were killed after an attack on a military vehicle. A soldier and a village guard were also wounded in the same attack attack. The death toll in in this specific attack was initially announced as three by news agencies, however, the Turkish Armed Forces (TSK) released a statement on Tuesday saying that two gendarmerie soldiers were killed in the attack carried out by the PKK. The military vehicle was attacked with rocket-propelled grenades and guns in the vicinity of Araköy after an explosive device detonated, sources added. Security forces have launched an operation backed by aerial support in the area to nab the suspected PKK terrorists. The fresh attack came two days after two soldiers were killed and 24 others were wounded, in a suspected suicide attack in the eastern Ağrı province. The Ağrı Governor's Office had blamed that attack on the PKK.

PKK terrorists also attacked the police department in the Kulp district of the southeastern city of Diyarbakır late on Monday. After the terrorists attacked the department with rockets, police retaliated immediately and a heavy gunfight broke out in downtown Kulp. According to local sources, the rockets launched by the PKK terrorists fortunately failed to cause any damage or casualties. The clashes are still going on in the area, locals report.

Furthermore, PKK terrorists attacked a police headquarters on Tuesday with rocket launchers in Turkey's southeastern province of Hakkari. Two terrorists on a motorbike were reported to have undertaken the attack around 12:45 p.m. in Hakkari's Yüksekova district. The incident quickly turned into a clash as the police returned the terrorists' fire. There is no information yet as to the number of injured or dead. The citizens around the area are panicked, with tradesmen closing down their stores. The police have launched an investigation into the incident.

Turkey has been hit by violence since a suicide bomb attack by a suspected ISIS supporter killed 32 activists in Suruç on July 20. The government has intensified its counterterrorism operations following the recent attacks carried out by the PKK, which is recognized as a terrorist organization by the U.S., the EU and Turkey. Formed in 1978, the terrorist group has been fighting the government for an independent state since the early 2000's. The group then shifted its goal to autonomy in predominately Kurdish inhabited regions of Turkey. The PKK announced on July 11 that the cease-fire that was declared via a message from the PKK's imprisoned leader Abdullah Öcalan in 2013 has ended. Turkish security forces have arrested hundreds of people with suspected links to ISIS, the PKK, and leftist groups, detaining over 1,300 people across the country, according to a recent statement released by the prime minister's Office. The Turkish Air Force has been carrying airstrikes against the PKK in northern Iraq and the ISIS militants in northern Syria. According to military sources, 261 terrorists were killed in Turkey's airstrikes against PKK's hideouts and camps in northern Iraq.
RELATED TOPICS