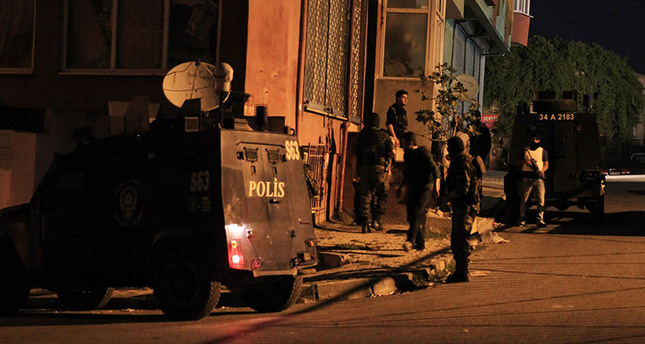 by Daily Sabah Aug 05, 2015 12:00 am
Counterterrorism teams of the Istanbul Police Department carried out a dawn operation in Istanbul's Gaziosmanpaşa and Bağcılar districts, targeting 13 addresses linked to the Revolutionary People's Liberation Party-Front (DHKP-C).

The police detained multiple suspects after searching their apartments, and three people have been taken into custody so far. The operation, including helicopters and riot police, is ongoing.

It kept a relatively low profile for many years and its attacks were relatively minor compared to the PKK, another terrorist organization active in Turkey. It however stepped up its attacks over the past two years. In 2013, a DHKP-C militant carried out a suicide bombing at the U.S. Embassy compound in Ankara, killing a Turkish security guard.

The DHKP-C also claimed responsibility for non-lethal rocket attacks targeting the Justice and Development Party (AK Party) headquarters, the Turkish National Police headquarters and a Justice Ministry building in Ankara in 2013. The group, designated a terrorist organization by Turkey, the U.S. and EU, advocates a far-left ideology. Its members do not have a homogenous ethnic background like the PKK, which mainly draws support from Kurds. The DHKP-C's power has significantly declined since the death of Dursun Karataş in 2008, one of its founding leaders.

Apart from outright terror attacks, the organization also looks to make a name for itself by exploiting protests such as the 2013 Gezi Park protests. It was common to see shotgun- and pistol-wielding members of the DHKP-C roaming the streets, especially in working-class neighborhoods where it recruits supporters, during the protests and subsequent rallies last year under the pretext of commemorating people who died during the protests.
RELATED TOPICS