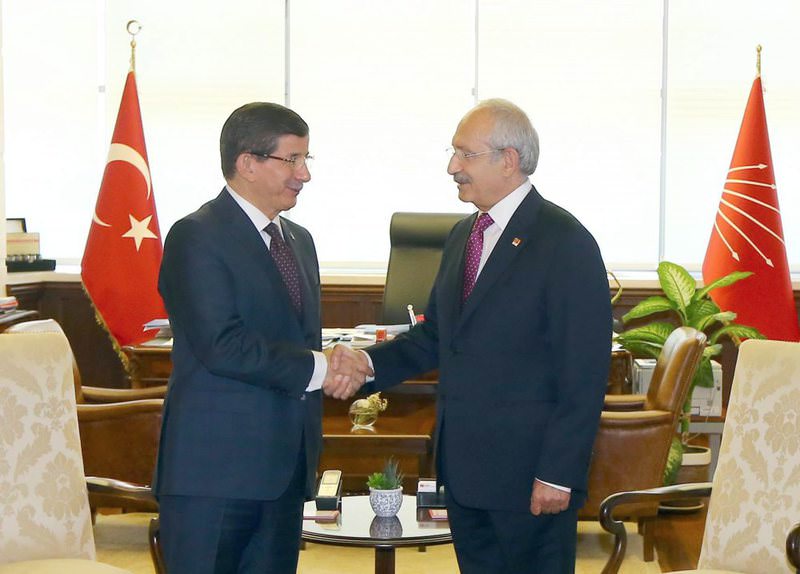 PM Davutoğlu and CHP Chairman Kılıçdaroğlu are expected to meet in the upcoming days to finalize the coalition negotiations between the two parties. Over the past week, the delegations from both sides held 35 hours of talks on forming a coalition government

With the Justice and Development Party (AK Party) and Republican People's Party (CHP) delegations having finalized their exploratory talks after five meetings, interim prime minister and AK Party chairman, Ahmet Davutoğlu, is to meet with CHP Chairman Kemal Kılıçdaroğlu by the end of this week. Following the exploratory meetings, which lasted a total of 35 hours, the delegations prepared reports and presented them to the leaders. Reportedly, there are five items on the table that the two parties disagree on. Moreover, indications are that CHP members are losing hope of a possible AK Party-CHP coalition due to recent statements from the Nationalist Movement Party (MHP). The final date to form a government is Aug. 23 according to the constitutional period.

The first item is foreign policy. The CHP wants to completely change Turkey's foreign policy, but Davutoğlu, who is the architect behind Turkey's current foreign policy, will not reportedly let go of the Foreign Ministry. Education policies are the second area of disagreement between the CHP and AK Party. The CHP, which wants to shut down the Supreme Education Board (YÖK), also wants to change the current 4+4+4 system to 13 years of compulsory education in a 1+8+4 system. The CHP also aims to rewrite the curriculum of İmam Hatip religious schools that the AK Party is sensitive about. Furthermore, the Kurdish issue and the reconciliation process was another topic in the coalition talks. Although AK Party and CHP officials have reportedly agreed on the formation of a new constitution, reportedly the two parties diverge on the topic of limiting presidential power. While the CHP is insistent on its 14 conditions, it has indicated that fulfilling its election promises concerning social policies is another critical topic.

Almost three-quarters of participants in a recent survey conducted by the Ankara-based Objective Research Center (ORC) indicated that they are in favor of early elections as opposed to a coalition government. Conducted in 36 provinces with the participation of 3,200 citizens between July 11 and July 15, the ORC survey found that 72 percent of participants supported early elections and 28 percent support the formation of a coalition government.

According to the survey, 90.2 percent of the AK Party voters who participated support early elections, whereas only 9.8 percent back a coalition government. Among CHP voters, the percentages are closer to each other with 57.9 percent responding that early elections should take place, while 42.1 percent support a coalition government.
RELATED TOPICS