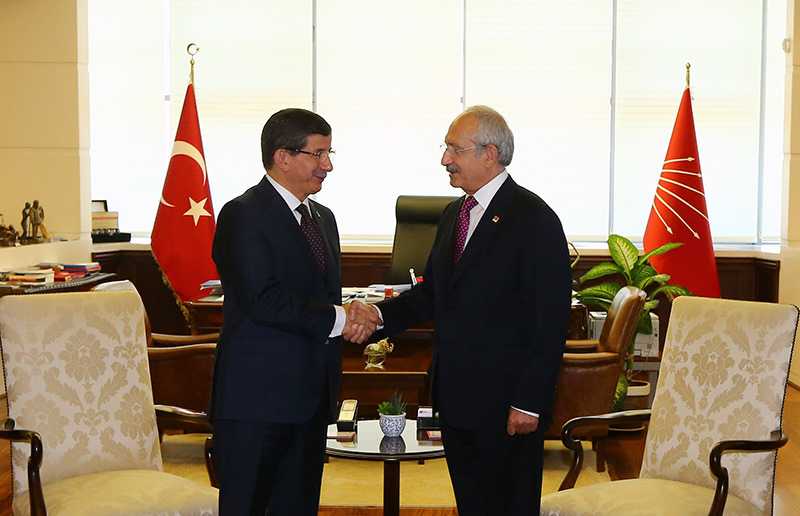 | IHA Photo
by Daily Sabah Aug 10, 2015 12:00 am
Turkey's Prime Minister Ahmet Davutoğlu has recently started following Kemal Kılıçdaroğlu, the chairman of Republican People's Party (CHP) on Twitter, shortly before the two are expected to meet for the final round of coalition talks at 6:00 pm on Monday.

Davutoğlu's move was seen by many as a gesture before the final talks, and surprised many as leaders of different political parties refrain from following their counterparts on social media.

Kılıçdaroğlu did not follow PM Davutoğlu, but many people speculate that their "social media relations" could give a hint about what to expect from the next government.

Political parties in Turkey have been struggling to form a coalition government since the June 7 general election in which the Justice and Development Party (AK Party) lost its majority in Parliament after nearly a dozen years, as the country has witnessed 35 hours of exploratory talks between the AK Party and the CHP. The Constitution-mandated 45 days that Davutoğlu has to form a government ends on Aug. 23.

As the final date to form a government approaches, parties are preparing for a possible snap election. The AK Party staff reportedly said that it is not possible to run the country for a long time under a coalition government formed either with the CHP or the Nationalist Movement Party (MHP), and the AK Party team is preparing to make some changes in discourse and policies that partly caused a loss of votes for the party in the June 7 election.

Turkish Prime Minister Ahmet Davutoğlu follows a total of 83 accounts on Twitter, Kemal Kılıçdaroğlu follows 9,946, while the chairman of the Nationalist Movement Party (MHP) does not follow anyone despite having almost two million followers.