Turkey, US agree on ISIS-free zone in Syria 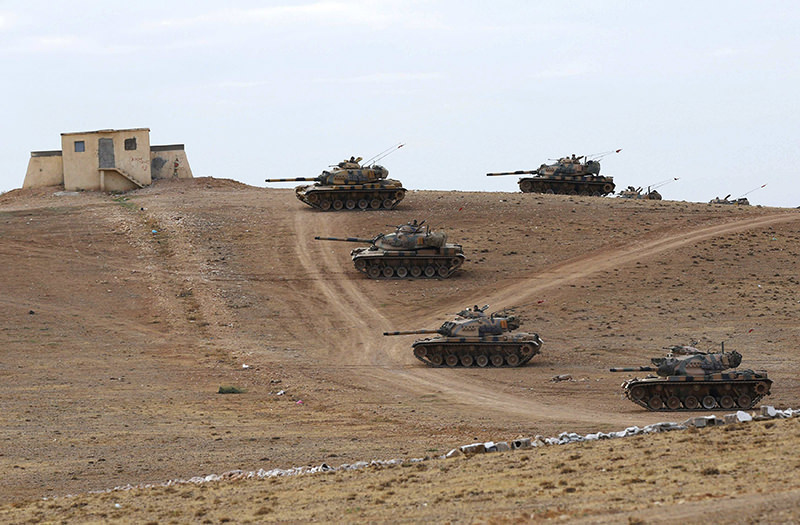 Turkish army tanks take up position on the Turkish-Syrian border near the southeastern town of Suruc in Sanliurfa province September 29, 2014 (Reuters Photo)
by Ali Ünal Aug 11, 2015 12:00 am
Foreign Ministry Undersecretary Feridun Sinirlioğlu stated on Tuesday that an ISIS-free zone in Northern Syria will be established.

"Not only Turkmens, but also Arabs, among others, will be placed in the zone. They will be under air-protection from any possible attacks by ISIS, PYD or the Assad regime. We have mutual understanding with the U.S. on this matter," he said.

The undersecretary also added that the ISIS-free zone will be as long as 48 kilometers and as wide as 95 kilometers.

Any ISIS members trying to infiltrate into the ISIS-free zone will be immediately neutralized by both Turkish and U.S. military forces, he said.

Meanwhile, the Ministry of Foreign Affairs released a statement regarding the issue on Tuesday night, but did not make any references to the PYD in terms of the free zone that would be established in Syria.

The U.S. maintained Tuesday that it does not view efforts to clear ISIS from the northern Syrian border as a bid to create a "safe zone."

"We've been very careful not to put monikers or descriptions describing what this area is going to look like except to say our effort is focused on driving ISIS out of the region," State Department spokesman Mark Toner said.

Toner stressed that, if cleared, the U.S. does not believe the area would be a "safe haven", emphasizing that the U.S. is seeking to drive ISIS "out of the region".

A contingent of six F-16s, and 300 American personnel arrived at the site last weekend, preceded by the first unmanned airstrike from İncirlik last week.

Asked if Washington would allow Ankara to carry out attacks against the Democratic Union Party (PYD), Toner said:

"Our understanding with Turkey is that they will not attack, and we would not agree to that."

The PYD's armed wing, the People's Protection Units, has dealt significant setbacks to ISIS in north Syria, supported by U.S.-led coalition airstrikes. Turkey suspects the militants of having ties to the Kurdistan Workers Party (PKK).

Toner further said that the U.S. is "focused on ISIS" when asked if the U.S. would participate in attacks against the PKK, adding that he wasn't aware of any congressional authorization to attack the PKK.

The PKK is recognized as a terrorist organization by the US and the EU.