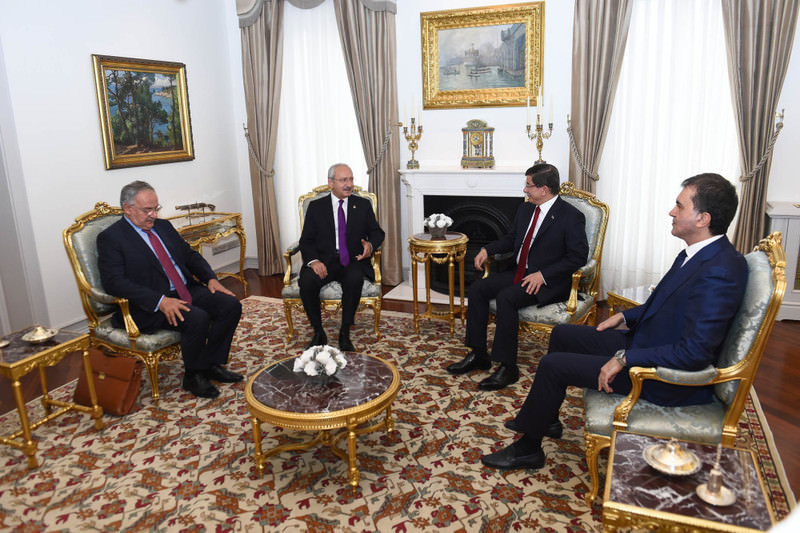 AK Party and CHP leaders held a meeting that lasted for almost three hours on Monday to discuss forming a coalition government. However, sources in Ankara point to a snap election as both sides disagree on many issues, mainly foreign policy

As the Aug. 23 deadline to form a coalition approaches, leaders from the Justice and Development Party (AK Party) and Republican People's Party (CHP) are expected to announce their final decision on the coalition negotiations on Thursday. While sources in Ankara strongly emphasize that the two party leaders have not agreed on a majority of items, other sources have said that a short-term reform government will be formed regardless of disagreements.

Following the recent meeting held between AK Party chairman and interim prime minister, Ahmet Davutoğlu, and CHP Chairman Kemal Kılıçdaroğlu on Monday, Culture and Tourism Minister Ömer Çelik from the AK Party said the leaders have shared their opinions in a congenial atmosphere in efforts not to leave Turkey without a government.

CHP Deputy Chairman Haluk Koç also made statements to the media that both the AK Party and CHP maintained a stance for the good of the nation during the talks. Davutoğlu is also expected to hold a meeting with the senior AK Party staff after the meeting held with the CHP. However, it has been reported that the AK Party and CHP, which is insistent on its 14 conditions, disagree on seven items.

They include the type of government, as the AK Party aims for a reform government, whereas the CHP wants a restoration government, the duration of the government, the concept of national will, foreign policy, presidential elections and education as well as mandatory religion classes.

However, it has been reported that the AK Party and CHP, which is insistent on its 14 conditions, disagree on seven items. They include the type of government, as the AK Party aims for a reform government, whereas the CHP wants a restoration government, the duration of the government, the concept of national will, foreign policy, presidential elections and education as well as mandatory religion classes.

Out of these items, the most critical two on which the AK Party and CHP have been unable to agree, are foreign policy and education. It has been indicated that Davutoğlu, who is the architect behind Turkey's current foreign policy, will not let go of the Foreign Ministry. If the CHP were to run the Foreign Ministry, some critics have said Kılıçdaroğlu's lack of knowledge of foreign languages could lead to a poor ability to perform an effective running of the ministry if he were to be foreign minister.

Educational policies are the second area of disagreement between the CHP and AK Party. The CHP, which wants to shut down the Supreme Board of Education (YÖK), also wants to change the current 4+4+4 system to 13 years of compulsory education in a 1+8+4 system. As 13 years of compulsory education will affect the İmam Hatip religious schools, the CHP also aims to rewrite the curriculum of the religious schools, which the AK Party is sensitive about. Additionally to the İmam Hatip schools, it has been reported that the CHP is urging changing the mandatory religion course into an elective course, which the AK Party is also highly critical of.

According to sources in Ankara, in the case of a reform government, the AK party and CHP may disregard the items that they were unable agree on until the end of the coalition government. Koç, in statements on Monday, said that despite disagreements and difficulties, there are still many areas that the two parties have agreed on together for the benefit of Turkey. As items on the economy, reconciliation process and a new constitution and rights of Alevis have not been mentioned as a disagreement, it has also been indicated that these areas are the items that the two parties have reached an agreement on. Although the 45-day period to form a government is drawing closer, Koç said that the parties are not bound to such a deadline. If the deadline expires without a government having been formed, either President Recep Tayyip Erdoğan or Parliament may decide to hold a new election. If Erdoğan issues the decision, the polling is supposed to be held on the first Sunday following a 90 day period starting from the end of the first deadline.

Meanwhile, Nationalist Movement Party (MHP) Chairman, Devlet Bahçeli, issued a written statement on Monday, calling for an immediate formation of a coalition government between the AK Party and CHP.

"These two parties should not avoid taking on the huge responsibility that history has placed on them, and should show their will and attention to form a government in line with national interests," Bahçeli said.

He also urged the two parties to hold coalition negotiations "without behaving reluctantly or having imaginary discussions involving infertile standoffs." The social-democrat CHP, which came out second in the June 7 elections and currently has 131 seats in Parliament, seemed the most likely coalition partner, with the pro-Kurdish Peoples' Democratic Party (HDP) ruling themselves out of any partnership with the AK Party. In the current set of circumstances, this scenario suggests an election in November. However, if Parliament makes the decision for a new election, then the Supreme Election Board (MYK) can reduce the 90 day period by as much as half.
RELATED TOPICS