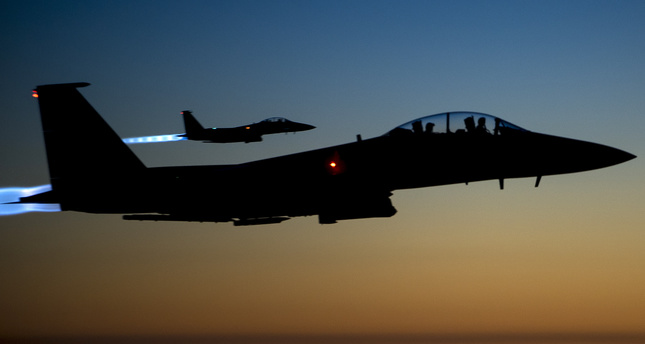 by Ragıp Soylu Aug 14, 2015 12:00 am
The U.S. officially confirmed on Thursday that it had asked Turkey not to undertake any airstrikes against the Islamic State of Iraq and al-Sham (ISIS) terrorist group in Syria until Turkey was fully integrated into the counter-ISIS coalition operations.

State Department Spokesman John Kirby said the reasoning for the decision was more technical, and that Syrian airspace was very dense, "and the Turks have agreed with that."

American media outlets have recently criticized Ankara for not doing enough to combat ISIS, emphasizing that Turkey's airstrikes were mainly focused on the PKK targets in northern Iraq. The PKK has ramped up its attacks in Turkey since July and has killed over 30 security officers and civilians.

Kirby's announcement also pointed to Turkish inaction against ISIS targets in Syria since last month. Turkey had launched a brief military operation against the extremists in July in retaliation for an ISIS attack on the Syrian border that killed a Turkish soldier.

Kirby did not provide a timetable for Turkey's full inclusion into the counter-ISIS operations, but many experts expect it to be completed in the near future.

A Turkish official, speaking to Agence France-Presse (AFP), said on Wednesday that Turkey was ready to begin operations against ISIS militants along with its NATO ally the U.S. after a pause for coordination purposes.

"Turkey and the United States will coordinate operations. From our perspective, there has been a pause right now, as the Americans have asked for us to wait for coordination purposes," he said.

A senior U.S. diplomat told Daily Sabah that Turkey's PKK attacks and allowing coalition forces to use İncirlik Air Base were not connected. "I understand how these two coincide and are interesting for the press. But both Gen. John Allen and Brett McGurk, top leaders of anti-ISIS coalition, told me that there is absolutely no link between these two," he said.

The diplomat also said that Turkey was even conducting airstrikes within its own territory in retaliation to PKK attacks: "Turkey is trying to protect its citizens."

The Free Syrian Army (FSA) advanced against ISIS for the first time since January 2014 on Thursday following the airstrikes from İncirlik that started on Aug. 12. According to local media reports, coalition forces have bombed ISIS holdings in Toybuk, Um Nahr, Um Hosh and Soran Guni districts in Syria, which are located right across from Turkey's south-central Kilis province. Jabhat al-Sham forces affiliated with the FSA and Turkmen forces have reportedly started attacking ISIS from Harjala village and were able to drive the terrorist organization back 2 kilometers.

Earlier in the week, Foreign Ministry Undersecretary Feridun Sinirlioğlu said that an ISIS-free zone in northern Syria will be established. Sinirlioğlu made the remarks at a reception held by the presidency of the Republic of Turkey, where he said the U.S. and Turkey have agreed on the establishment of an ISIS-free zone where members of the moderate Syrian opposition will be placed. Moderate Syrian opposition forces will be responsible for the protection of the area and will be supported by the U.S. and Turkish air forces. "Not only Turkmens, but also Arabs, among others, will be placed in the zone. They will be under air-protection from any possible attacks by ISIS, PYD [Democratic Union Party] or [Syrian President Bashar] Assad's regime. We have a mutual understanding with the U.S. on this matter," he said.

He also added that the ISIS-free zone will be as long as 48 kilometers and as wide as 95 kilometers. Any ISIS members trying to infiltrate the zone will be immediately neutralized by Turkish or U.S. military forces, he said.

The U.S. has agreed to block the PKK-affiliated PYD from the ISIS-free zone in northern Syria as it expands the scope of its train-and-equip program, Turkish diplomatic sources said on Wednesday.

According to information received from diplomatic sources, the U.S. will send more anti-ISIS aircraft to take off from Turkey's southern İncirlik Air Base, which has recently been made available to the U.S.-led counter-ISIS coalition, in the upcoming days. Yet joint operations will start at an appropriate stage.

Turkish officials have said both the U.S. and Turkey have warned the PYD not to push west of the Euphrates, not to make any demographic changes in the region and let Syria's displaced Turkmens and Arabs to return to their homes.