Those who support terror will ultimately perish, there is no victory for cowards: Erdoğan 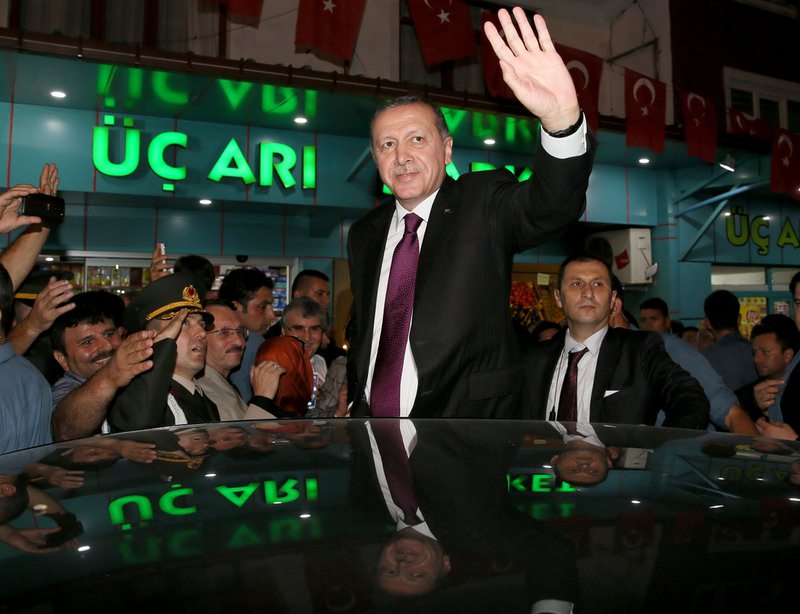 President Erdoğan emphasized the importance of Turkey’s campaign against terror and said that 'supporters of terrorism will ultimately fail' in the speech he gave in his hometown Güneysu in the Black Sea region.

President Recep Tayyip Erdoğan visited his hometown Güneysu in the northern province of Rize late on Thursday. Giving a speech to the locals of Güneysu, the president emphasized the importance of fighting against terror.

Erdoğan said that his hometown visit was for the opening ceremony of Hacı Hafız Yusuf Yılmaz Mosque. The president also said that he will attend some programs organized by the Rize Municipality, Rize Governorate and several non-governmental organizations during his visit.

Touching upon the recent terror attacks of the PKK, Erdoğan said that he knew that the people of Turkey are seriously worried about the current situation.

"But do not forget that there is no victory for cowards. Never think that those terrorists are powerful, those coward terrorists are bound to fail and perish. Our recent anti-terror operations are not temporary, our fight against terror will continue until the last terrorist leaves our territory," he added.

Saying that every kind of terror has to be opposed, he criticized those who do not condemn PKK terror.

"They lean on terrorists and terrorist organizations. But Allah is with us, our people are with us. We are continuing our struggle as the whole nation. Please do not worry about the situation, thank Allah that we are powerful. Whoever supports or controls terrorists will sooner or later be defeated," the president further stated.

After his speech, Erdoğan celebrated the Friday of the locals and congratulated those who contributed to the building of Hacı Hafız Yusuf Yılmaz mosque.