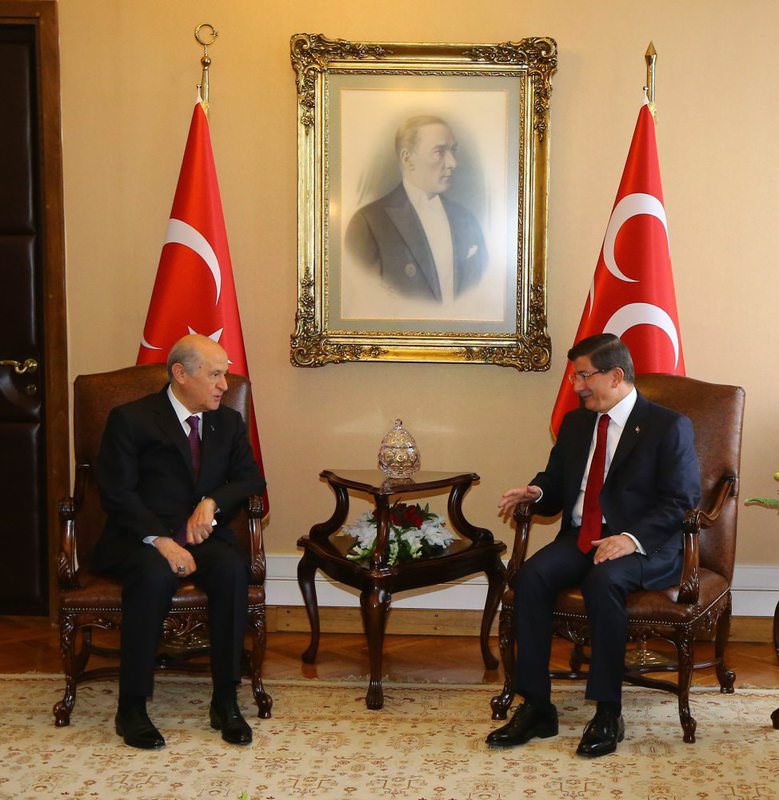 Prime Minister and Justice and Development Party (AK Party) Chairman Ahmet Davutoğlu met Nationalist Movement Party (MHP) Chairman Devlet Bahçeli today at 2:00 p.m. in the Parliament in an attempt to form a coalition government after hours of talks between the Republican People's Party (CHP) and AK Party ended unsuccessfully. Following the meeting, which lasted 2.5 hours, both party leaders are expected to hold a press conference at their party's headquarters. Since Bahçeli has often reiterated that the MHP wants no part in a minority or a caretaker government, there is currently little hope in Ankara that a coalition between the AK Party and MHP will materialize.

According to the prime ministry sources, Davutoğlu was expected "talk with Bahçeli without any prejudice". Davutoğlu was also expected to highlight alternatives, including the formation of a government within joint and agreed issues.

Surprisingly accepting Davutoğlu's invitation for a meeting for coalition talks, Bahçeli was granted by his party to hold coalition talks on Saturday and according to Sabah newspaper's sources in Ankara, Davutoğlu would submit a coalition offer with four options to Bahçeli in today's meeting. The first option that Davutoğlu was expected to discuss with Bahçeli was a long-term coalition, but the AK Party wants Bahçeli to soften his discourse and support the steps taken in democratization.

The biggest drawback to the first option is seen as Bahçeli's harsh rhetoric that he adopted after the June 7 parliamentary elections. Reportedly, even though both parties' bases find an AK Party-MHP coalition favorable, Bahçeli's discourse is one of the main reasons undermining a long-term coalition option. If both sides do not reach an agreement on a long-term coalition government, Davutoğlu is expected to bring the short-term reform government option to the table as a second option. According to sources, the second option will include fighting terror full steam and some reforms to increase the public's democratic gains. A new constitution, changes in electoral law and reducing the election threshold are among other topics included in the second option.

The third option in Davutoğlu's coalition offer is asking for the MHP's support for an AK Party minority government. As the third option, Davutoğlu will reportedly promise Bahçeli to make some short term reforms that include reducing the election threshold considering the terror conditions and to go to the ballot box in the spring of 2016. The last option on the list is to have early election in November with the current government. Evaluating a possible coalition government between the AK Party and MHP, AK Party sources have said that even though they have no prejudices about a coalition with the MHP, Bahçeli should soften his discourse to remove the impression of a "war cabinet" surrounding a possible AK Party-MHP coalition.