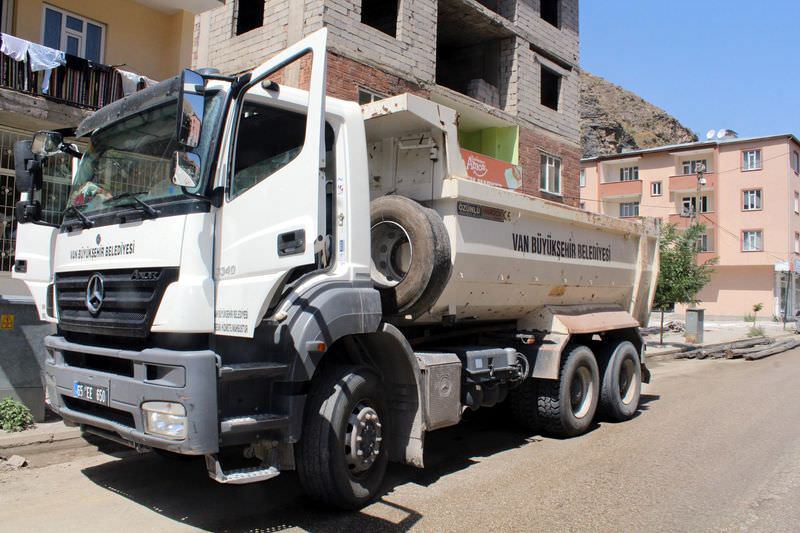 by Nurbanu Kızıl Aug 22, 2015 12:00 am
Illegal materials used for bomb making have reportedly been found in a truck belonging to the Municipality of Van, which is ruled by the Peoples' Democratic Party (HDP), at a time when the party is scrutinized for hesitating to keep a distance from the PKK terrorist group and its deputies openly express their support for it and provide assistance to the outlawed organization.

According to a report released by Van Police Department –covering the period between August 9 to 18- 20 cell batteries, 100 kilograms of ammonium nitrate and other chemicals used for bomb making were found in a truck belonging to Van Municipality.

Recently, there have been claims that municipalities administrated by the HDP provide assistance to PKK by digging trenches and establishing roadblocks to claim control over cities. In Siirt province, HDP municipality reportedly dug the roads to enable PKK terrorists plant mines and paved it afterwards so that the PKK can blow them up when vehicles belonging to the Turkish Army pass by.

HDP deputies have faced strong criticism and legal inquiry for their pro-terror stance. Files have accordingly been submitted by the government to the Turkish Parliament Speaker's Office on removal of the parliamentary immunity in order to launch investigations. In July, HDP deputy Faysal Sarıyıldız was accused of "supplying arms to the terrorist organization" as he allegedly helped smuggle weapons from Syria into Turkey to be delivered to PKK.

Ziya Çalışkan, who is a HDP deputy from southeastern Şanlıurfa province, attended the funeral ceremony of one of the two PKK terrorists, who attacked the police station in Adana, despite the party's claims that they do not support the terrorist organization. Here, he referred to the terrorist as a 'martyr' and added that he will live for the 'honor of the – so-called - martyrs.'

The party has been criticized for refraining to condemn the terrorist attacks. For instance, HDP's co-spokesman and İzmir Deputy Ertuğrul Kürkçü said that PKK terror attacks on Turkish security forces are not "a matter of condemnation" in a live broadcast on BBC on August 6.

Another HDP deputy, Abdullah Zeydan made provocative statements and threatened Turkey by saying that the terrorist organization PKK has the power to "suffocate Turkey with its spit." He later apologized after receiving harsh criticism for siding with and praising a terrorist organization.

During the campaign period for the June 7 general elections, Van Municipality was criticized for posting controversial advertisement showing blood flowing from a tap on billboards, which was removed by a court order after the HDP-administrated municipality refused to take the posters down.

The HDP was also accused by the government of threatening locals in eastern Turkey with PKK's reprisals in order to increase their votes.

With news of slain security officers reported daily leading to heavy criticism of the HDP and PKK by the public, the party has reportedly agreed on a motto to be used during the new election campaign: "We are on the side of peace, the government on war."

Turkey has been hit by violence since a suicide bomb attack, by a suspected ISIS supporter, which killed 32 activists in Suruç on July 20.

Turkish security forces have arrested hundreds of people with suspected links to ISIS, the PKK, and leftist groups, detaining over 1,300 people across the country.