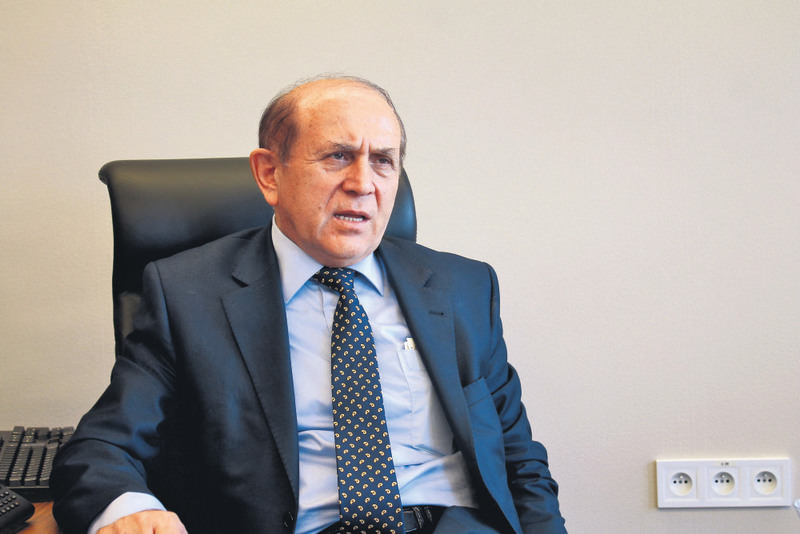 In an exclusive interview with Daily Sabah, former deputy and constitutional law professor Burhan Kuzu said politicians who could not form a gov't are trying to create the perception that the president hindered the process

With Turkey going to the polls with a caretaker government for the first time in its history, the failure of the political parties to form a coalition heated up the discussions whether Parliamentary system can ensure the country's stability. Daily Sabah spoke with Burhan Kuzu, a professor of constitutional law, former deputy and one of the principal consultants of President Recep Tayyip Erdoğan.

Kuzu expressed that some political party leaders are trying to put the blame on President Erdoğan, instead of facing their failure in forming a coalition government. He also added that as a person who fought against party closures and has several books on the subject, being accused of trying to close the Peoples' Democratic Party (HDP) by the HDP Chairman Selahattin Demirtaş was "a farce."

Kuzu said that the people were able to perceive both Prime Minister Ahmet Davutoğlu's efforts and opposition's rejection of all options during the 45-day process; thus, expressing it will be easier for the Justice and Development Party (AK Party) to explain itself to the public.

Daily Sabah: Due to the failure of coalition talks, Turkey will be going to polls with a caretaker government for the first time in its history. As a professor of constitutional law, how do you evaluate this process?

Burhan Kuzu: Unfortunately, the political parties could not reach an agreement during the 45-day period to form a government. Prime Minister Davutoğlu's last day call to go the polls with Parliament instead of a caretaker government was ignored. Thus, there is not any other option left; President Erdoğan has to call for the formation of a caretaker government. The 116th Clause of the constitution clearly states that the president has to take the country to the polls if a government cannot be formed. As this clause is to be practiced for the first time, there are some discussions. The speaker of Parliament will determine how many ministries the political parties in Parliament will have, according to their share of the total vote. If a party or a person rejects the duty, independent candidates will be appointed in their stead. Who will receive which ministry relies on the prime minister's initiative; none of the political parties have the right to determine either their candidates or the ministry. On the other hand, the final say in this process is the president's.

BK: The politicians and political parties who were unable to find a common ground, let alone form a government, within the given time should see the fault in themselves. If there was a compromise between the political parties to form a government, how could the president obstruct it? President Erdoğan never had tried to thwart the formation of a government. On the contrary, if you look at his statement after the June 7 elections, he stated that Turkey should not be left without a government and everyone should do what they have to do. However, some political party leaders, as they will not be able to explain their failure in forming a government to the public, try to create the perception that President Erdoğan thwarted the process. President Erdoğan was asked what would happen if the coalition talks failed and he said that the country should go to the polls, as the constitution states. Later, this statement is reflected as if the president himself wants early elections. During the meetings I have held with him, he has never stated that a coalition must not be formed or the country has to go to an early election. These allegations are all the fabrication of incompetent politicians who are unable to form a government.

DS: HDP leader Demirtaş had claimed that you were trying to close the HDP. What are your comments on this subject?

BK: Demirtaş's allegations are baseless and inconsistent. Anyone who knows my political career will see that I am against political party closures. As a politician and a legist, I have always been against party closures. I have many works on this subject. Turkish political history is like a party cemetery; however, as it can be seen, this does not resolve any issues. On the other hand, I was one of the contributors of,the law making party closure impossible, which was included in the 2010 Constitutional Reform Referendum. However, as the HDP and Republican People's Party (CHP) deputies did not support it, it could not pass Parliament. Now, the same people are claiming that I am in favor of political party closures.

DS: The electoral threshold's removal or lowering is one of the most discussed issues around at the moment. What are your opinions regarding this topic?

BK: This is an issue that concerns Parliament; however, my opinion is that the threshold should be 7 percent in this system. An amendment is impossible for the upcoming elections, as it will require a new constitution and it will be available for application after this election.

If a transition to the presidential system we are advocating actualizes, the electoral threshold will be lifted and all of the parties will have the opportunity for fair representation. It will also eliminate the inconclusiveness we are experiencing now and provide stability.

DS: Do you think there is a system crisis in Turkey?

BK: There has been a system crisis since the foundation of the country. While it works from time to time, the parliamentary system is a problematic system at its core. Think of a model in which you are not sure whether a government can be established while you are going to the polls. As this model continues to exist, the presidential system debates cannot cease to exist. During the 10-year periods between 1970-1980 and 1990-2000, Turkey had 12 and 10 governments, respectively. The coalition governments of these periods have always drained all of the gains of the previous single party governments.

DS: In this context, doesn't the AK Party's ruling period prove that the system works?

BK: The parliamentary system is able to function despite a myriad of problems as long as there is not a coalition government and it can provide stability during a single-party rule. I have been advocating for the presidential system since the first AK Party government was formed in 2002. Because of my advocacy, I was criticized even by my fellow party members. They have said that we were ruling as a single party and there is no need for the presidential system. However, the current political situation indicates that I was right in my advocacy.

The contemporary model is a bankrupt model. Coalition periods have always been the ones that harmed Turkey the most. For example, led by Süleyman Demirel, the Justice Party (AP) developed the country in 1960s as it was a single party rule; however, when the AP, still led by Demirel, had to be a part of a coalition during 1970s, the country suffered a significant economic recession. This indicates that the current parliamentary system is faulty. The presidential system, on the other hand, is like a jewel; only an appraiser can understand its value.

DS: When the discussions over the presidential system started, it was alleged that this system was proposed because President Erdoğan desired an authoritarian administration. What are your comments?

In our presidential system, we foresee checks and balance mechanisms and a strong parliament that limits the authority of the president.

DS: The Turkish presidential system's contents were not well explained, as it was also expressed by President Erdoğan. What does this system include?

BK: The presidential system we advocate is based on the U.S. presidential system, while there are many differences. Even in the U.S., it is discussed that Parliament is stronger than the president, creating a deadlock in the system, and they are seeking for solutions. In our text with 130 clauses that we prepared and proposed, actually includes some of the solutions they seek. It is for this reason we call it the Turkish presidential system. For example, in the U.S., Congress and the president do not simultaneously go to the elections. Another difference is the statutory decree. The president will have the authority to enact law within the constitutional framework; however, this does not mean that it is final. When Parliament passes a law in a similar or opposite manner, the statutory decree will become invalid.

As I have said, the parliamentary system is plagued with dictatorship, as it does not have the separation of powers. Parliament is a body of the executive, the prime minister. There is a rule of leaders and they are in control of their parties. Deputies owe their election to the leader. However, in the presidential system, deputies depend on delegates for reelection, not party leaders. In the U.S., we observe that there are diverse views on a proposed law even within the parties, while in Turkey it is almost impossible for a deputy to go against the collective decision of the party. The presidential system, therefore, will highlight deputies' independence and individual views.

DS: Do you think that the public understood the importance of the presidential system after the June 7 elections?

BK: Frankly, I do not think that the presidential system is well explained to the public; what it is and what changes it includes should be explained. As it is not yet explained to the public, the discussion whether it could be implemented is currently irrelevant. However, if need be, we can call on a referendum with four months of propaganda and we can explain it.

In my opinion, the presidential system is more compatible with the Turkish social structure. In the 2007 referendum in which the people voted for the popular election of the president, is the indicator of this. This referendum also signifies that the people are moving away from the parliamentary system, as the popular election of the presidents constitutes one half of the presidential system. President Erdoğan has also been expressing this in his latest statements about the changes in the system. Because President Erdoğan is not a silent president as the opposition desires, he is constantly accused of one thing or another.

DS: What do you think about the calls that state that the president should withdraw to the constitutional boundaries?

BK: As he has never surpassed his legal authority, I think that these calls are invalid. President Erdoğan is aware of his legal boundaries and acts accordingly. The opposition continuously insults him and expects him to stay silent. This is not possible.

In this context, before alleging that the president sabotaged the coalition talks, the opposition should criticize itself. They have rejected Prime Minister Davutoğlu's call to go to the election with Parliament instead of a caretaker government. Then, they accuse the AK Party of being in league with the HDP.
RELATED TOPICS