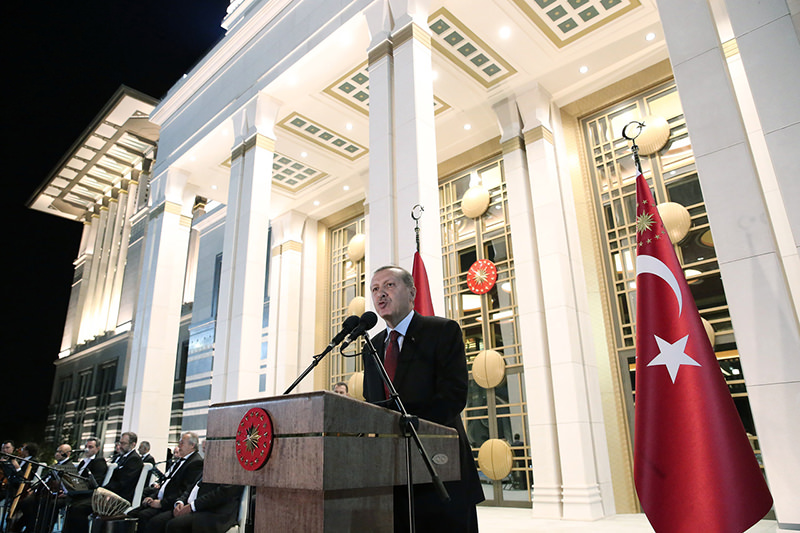 | DHA Photo
by Nurbanu Kızıl Aug 28, 2015 12:00 am
President Recep Tayyip Erdoğan's first year in office has marked many unprecedented features in Turkey's political history, from the day he was elected by a popular vote on August 10, 2014, as he became the first president to renew elections following the failure of the establishment of a coalition government.

In line with Articles 104 and 116 of the Constitution, Erdoğan became the first president to renew elections on August 24, following talks with Parliamentary Speaker İsmet Yılmaz.

August 28 marks the first year Erdoğan officially took office as the first democratically elected president of Turkey, and received 52 percent of the vote.

As the 12th President of Turkey, Erdoğan ratified a total of 103 laws, appointed 49 rectors, nine members to Turkey's Higher Education Board, and granted amnesty for three prisoners.

Within a year, Erdoğan made a total of 54 domestic and 36 visits abroad and became the first Turkish president to pay an official visit to Cuba.
The Turkish President also accepted a number of foreign visitors, and his first guest was Pope Franciscus, who came to Turkey in November 2014.

Moving the presidential office from Çankaya Palace to the newly built Presidential complex in Beştepe, Ankara, President Erdoğan also introduced new practices to official ceremonies such as the inclusion of guards representing and carrying the flag of 16 Turkish states established throughout history.

Weekly meetings held with local headmen – who are elected by the people at the neighborhood level - were another feature of Erdoğan's first year in office, and has welcomed a total of 4,000 representatives in 10 meetings. He will reportedly welcome around 50,000 local headmen to the presidential palace during his tenure.

During the election campaign, President Erdoğan had stated that he will not be an 'ordinary president' and that he will take an active role to address and solve the issues faced by the country and the people.

Unlike his predecessors, Erdoğan has adopted an active role and encourages state representatives at local levels, - such as governors - to listen to and address people's problems.

The newly constructed presidential complex is also a part of the approach which embraces a more active relation with the people, as it welcomes citizens in its community center – which is still under construction -, and People's Mosque which was opened in July, whereas before the presidential compound at Çankaya was solely designated for the use of state officials.