Turkey, US ready to launch first joint operations against ISIS 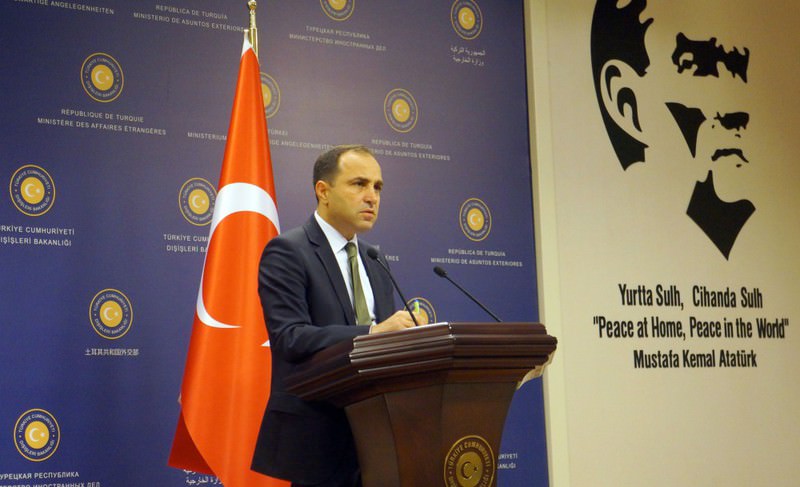 by Merve Aydoğan Aug 28, 2015 12:00 am
The Foreign Ministry confirmed on Thursday at a press conference in Ankara that joint operations are to begin in the near future with the recent announcement of finalizing the technical details of the agreement made with the U.S. regarding operations against the Islamic State of Iraq and al-Sham (ISIS). Speaking to the media, Foreign Ministry spokesman Tanju Bilgiç said that though conducting airstrikes is a technical detail, joint airstrikes are naturally expected to be held with the U.S.

"Once the targets are determined, the required intelligence must be made, which will then be followed by an operation. Turkey and the U.S. have announced their agreement on the technical details, thus it is obvious for all to expect joint airstrikes to begin in the near future," Bilgiç said. Additionally to Bilgiç's statements on Thursday, Foreign Minister Mevlüt Çavuşoğlu said there are no contradictions between Turkey and the U.S., and "how the joint operations will be realized is a matter for the military and its related institutions." Commenting on the current status of the train-and-equip program, Bilgiç said despite the challenges the first group is facing in the area due to regional events, the training of the second group of 100 individuals is still continuing.

U.S. State Department spokesman John Kirby on Monday lashed out at criticism of Turkey lagging behind in its efforts as a member of the anti-ISIS coalition. "They've allowed us to use airbases now. They're going to soon be flying in the coalition air tasking order, you know, inside the coalition planning cycle for air ops, and yet I continue to get questions up here, that you know, why they aren't doing more; why aren't they doing enough," Kirby said.

Kirby made it clear that there is not a different approach between the Defense and State Departments in that respect, noting that he found it "interesting" that the discussions around Turkey's efforts continue, despite its efforts. "Here's a nation that has 2 million refugees from Syria that it's taking care of. With significant security concerns of their own, a foreign terrorist group, like the PKK, continues to attack them, as we saw throughout the weekend," he added, referring to the ongoing killing of Turkish security personnel in PKK attacks.

In regard to the recent claims from British newspaper The Telegraph reporting that Turkey has begun training a police force for the ISIS-free zone in Syria, Bilgiç said Turkmens are a fundamental part of Syria and strongly denied the claims in The Telegraph. Whereas the U.S. and Turkey inked an agreement in February to train and equip moderate Syrian opposition forces, the program has only taken place in Turkey and Jordan even though it was also set to take place in Saudi Arabia and Qatar as well.

Bilgiç has also confirmed that Turkey cancelled visa-free travel for Libyan nationals. Underlining that the removal of visa-free travel does not mean any change in Turkey's approach toward the Libyan people, and that Turkey would continue to support Libyans, Bilgiç said that due to political instability as well as security concerns the decision will come into effect as of Sept. 24. Libyan citizens who wish to obtain a visa for Turkey can get it from the Consulate General in the city of Misurata as well as from neighboring countries.
RELATED TOPICS