Who is Turkey’s new Minister of Foreign Affairs, Feridun Sinirlioğlu? 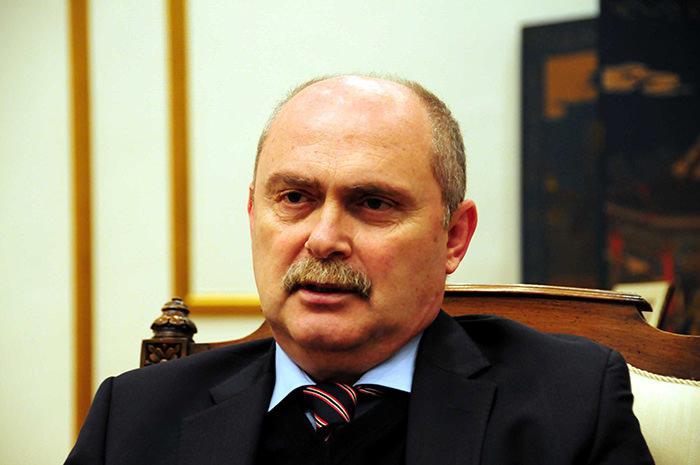 Minister of Foreign Affairs Feridun Hadi Sinirliou011flu (File Photo)
by Mehmet Çelik Aug 29, 2015 12:00 am
The Minister of Foreign Affairs position has been given to Feridun Hadi Sinirlioğlu by Prime Minister Ahmet Davutoğlu, as he announced his interim cabinet on Friday, after President Recep Tayyip Erdoğan gave him the mandate to form a caretaker government.

Sinirlioğlu has held various diplomatic positions throughout his career, and will now serve as the 44th Minister of Foreign Affairs of Turkey in the caretaker government formed by Prime Minister Davutoğlu. Feridun Sinirlioğlu has served as the Undersecretary to the Foreign Ministry since 2009 and has also worked close to PM Davutoğlu, during his position as the Minister of Foreign Affairs, between 2009 and 2014.

Sinirlioğlu, born in 1956 in Görele district of Turkey's Black Sea Region's Giresun province, received his Bachelor of Arts degree from Ankara University and holds M.A. and Ph.D. degrees from School of Political Science and International Relations in Bosporus University. Upon completion of his Ph.D. degree in 1982, Sinirlioğlu began his career in Turkey's Ministry of Foreign Affairs as the Third Secretary in Multilateral Cultural Relations Department. Between 1985 and1992 he served in Turkey's diplomatic missions in The Hague, Beirut, and Greece. In 1992, Sinirlioğlu was appointed as the Undersecretary to the Permanent Representation of Turkey to the United Nations.

The new foreign minister has also served as the Chief Foreign Policy Advisor to Turkey's former President Süleyman Demirel between 1996 and 2000, Minister and Deputy Director General for the Middle East and North Africa between 2000 and 2002, and served as the Ambassador of Turkey to Israel between 2002 and 2007. Feridun Sinirlioğlu continued his career as the Deputy Undersecretary for Bilateral Political Affairs from 2007 to 2009.