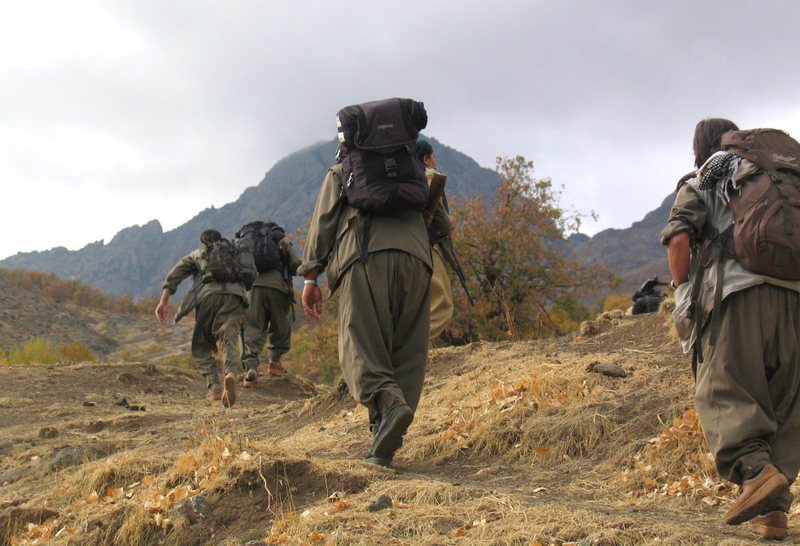 According to a recent Interior Ministry report, PKK and DHKP-C terrorists, along with other terrorist groups, prefer living in Germany to conduct activities with experts saying this is not a new issue for the country

Thousands of terrorists from several organizations including the PKK, Revolutionary People's Liberation Party-Front (DHKP-C) and Islamic State of Iraq and al-Sham (ISIS) have taken shelter in Germany, an Interior Ministry report claims.

Presented during the visit of a committee from the German Ministry of Interior Affairs last week, the report says that terrorist organizations use the country for financial, logistic and sheltering means by making activities under the umbrella of legal associations. According to the report, 13,000 PKK-linked people, which increased to 50,000 in the demonstrations and meetings, have been detected in Germany and continue their activities under legally recognized associations and foundations.

Although the PKK is recognized as a terrorist organization by the EU and U.S., senior figures can still continue terror-linked work, especially in Germany, without being handed over to Turkey while officials avoid cooperating on the issue.

Justice and Development Party (AK Party) Mardin Deputy Orhan Miroğlu, a renowned Kurdish intellectual, said that the PKK is purposely tolerated in Germany due to the country's desire to return the game in the Middle East and the PKK becoming a useful actor contrary to its position in the past. He said the movement has its political wing in Turkey, armed militia in Qandil, its jailed leader Abdullah Öcalan in İmrali island and the final part of its organizational structure, the European leg. "To what extent can EU countries sheltering an armed movement be seen as legitimate?"

German intelligence units revealed that more than 1,950 people linked with the DHKP-C and the Communist Party of Turkey/Marxist Leninist (TKP/ML) carry out activities in Germany and most of their senior figures hide out in the country. "Ecevit Şanlı from the DHKP-C, who conducted a suicide-bomb attack on the U.S. Embassy in Ankara in 2013, had been the Cologne executive of the organization until October 2012. Likewise, 60 members of the organization are in Europe," the report said. Serdar Kaya from the Revolutionary Headquarters Organization and Tamer Tuncer from the Revolutionary Communists Union of Turkey (TİKB), who had been involved in several bloody activities against state officials, are other figures detected in Germany. Even though Turkey has issued a "red notice" for him, German officials have refused the demand due to his refugee status since 2010.

Extradition requests for hundreds of suspected terrorists who had been detained in European countries were rejected by Germany due to several reasons such as asylum seeking. Turkey issued "red notices" for about 324 terror-linked individuals, most in the country, and while 162 of them were detained, Turkey's demand for deliverance of the suspected terrorists have so far been rejected, including 81 people in Germany.

According to Kurtuluş Tayiz, a Kurdish politics expert and columnist, Germany's taking of terrorist organizations under their wing is not new and the country acts as a repository of intelligence for regional interests. He said "Before the 1980s, Germany harbored groups or organizations that stired up chaos and instability in Turkey disregarding them as being pro-left or pro-right," adding however that Al Qaeda was not privileged to such a tolerance as it was witnessed after the Charlie Hebdo attack in Paris.

The aforementioned report stresses that Turkey deported 62 German ISIS-linked suspects following the operations started on July 24, along with the lack of information-sharing from German security officials about 265 people who was picked up "Risk Analysis Desk" units.

German politicians have made contradicting remarks regarding the PKK. Volker Kauder, who is referred to as the "right hand" of Chancellor Angela Merkel, had said Germany could send weapons to the PKK, while Minister of the Interior Thomas de Maiziere said the PKK was responsible for violent street protests in Turkey. "The PKK is a terrorist organization and it will continue to stay so for us," he said.

According to a report released by de Maiziere again, Germany's extreme leftist political parties are in cooperation with the PKK, and the PKK is trying to leave behind its terrorist image, exploiting the sympathy it has received through the clashes with ISIS in Syria and Iraq.

In February, the German government opposed a proposal to lift a ban on the PKK. Legislators criticized the proposal based on the grounds that the PKK has not changed its terrorist ideology and agenda, which contradicts international understanding. According to reports, German courts have convicted more than 4,500 PKK suspects, while the country, which has about 700,000 Kurdish immigrants, outlawed the PKK in 1993 following a series of violent protests.
Last Update: Sep 02, 2015 1:48 am
RELATED TOPICS