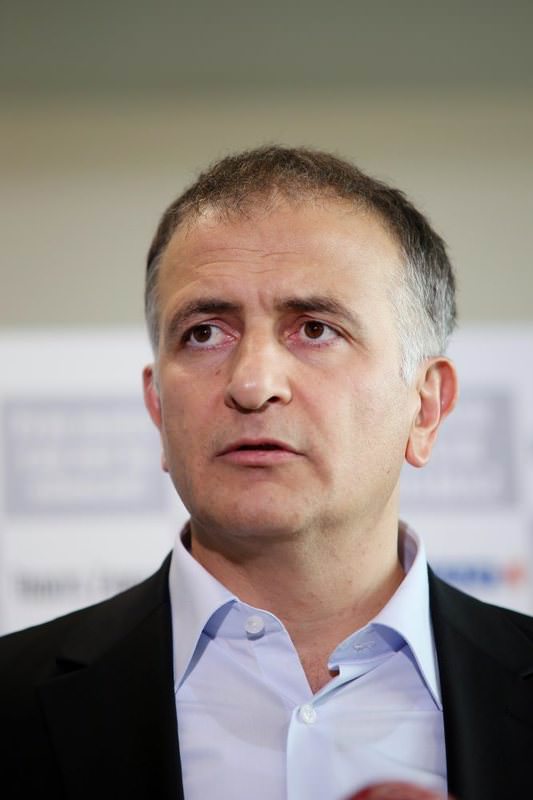 by Daily Sabah Sep 03, 2015 12:00 am
Gülen Movement-affiliated daily Zaman Editor-in-Chief Ekrem Dumanlı, in a televised interview on Kanaltürk, which is owned by a Gülenist figure, Akın İpek, whose companies were raided by police for allegedly supporting a terrorist organization, said that either President Recep Tayyip Erdoğan will leave by his own free will or he will be pushed to leave the post. Targeting the president, Dumanlı, who is a prominent supporter of the Gülen Movement, which is accused of infiltrating key state institutions in an attempt to overthrow the government, added: "What will happen when the nation's conscience does not accept it? … He has to go."

Dumanlı has been heavily critical of the government since last year in the wake of the Dec. 17 operation. The government has launched efforts to remove Gülenists from key posts in the police, judiciary and government agencies after an alleged plot by Gülenists involving wiretapping of political leaders and journalists was revealed. Described as a "parallel structure" by Erdoğan, Gülenists are accused of attempting to overthrow the government through members in the country's institutions. Intolerant of criticism, the movement, which is headed by Pennsylvania-based cleric Fethullah Gülen, is accused of imprisoning critics through sham trials by prosecutors and judges linked to the group. Most notably, journalists Ahmet Şık, Nedim Şener and former Police Chief Hanefi Avcı were jailed for releasing books critical of the Gülen Movement. Released after prolonged jail terms without reasonable cause, Şık, Şener and Avcı claimed they were targeted by Gülen Movement-linked prosecutors and judges who leveled charges of being members of a terror network without any concrete evidence.

Leaving aside journalists put behind bars by the Gülen Movement, Can Dündar, the Cumhuriyet daily editor-in-chief, expressed his reaction to the operations into Koza İpek Holding companies. Speaking to the Gülenist Samanyolu TV, Dündar said that those who carried out operations against Gülenist media channels and companies, journalists who do not raise their voices and judges that ordered the operation would be tried in court and that they would be the ones who take the witness stand when that day comes. Dündar's remarks were reminiscent of Republican People's Party (CHP) Secretary-General Gürsel Tekin's threats to seize some newspaper critical of CHP if they had come to power in the June 7 general election. Tekin claimed there is a campaign against the CHP and threatened media outlets saying: "On June 8 and June 9, our first job is to seize these filthy newspapers. We will not only seize them, we will ask for the accounts of all the businessmen who are involved with them."

On Aug. 30, police launched a probe into Koza İpek Holding, which is suspected of financially supporting and disseminating propaganda for a terrorist organization, authorities said. Police units from the Combating Organized Crimes branch of the Ankara Police Department raided the holding's 23 companies. Koza İpek Holding is suspected of providing financial support and distributing propaganda of what government officials call the "Gülenist Terror Organization" (FETÖ), police sources said, which is led by Gülen. During the search the police confiscated documents and computers belonging to the holding company. Six people have been arrested and an arrest warrant was issued for İpek, the group's chairman, who the source said was thought to be in the U.K.

Koza İpek was founded in 1948 by Akın İpek's father, Ali İpek, as a printing company. Among its media holdings are the Bugün and Kanaltürk TV stations and newspapers Bugün and Millet. Additionally, Koza İpek Holding assembles more than 20 firms operating in a wide range of sectors, including the gold and media sectors. The raid on Koza İpek Holding's 23 companies did not include its media organizations, sources from the prosecutor's office told Anadolu Agency. Newspapers owned by the group said the raids were conducted against the İpek Media Group, but did not specify the offices of individual news outlets.
RELATED TOPICS