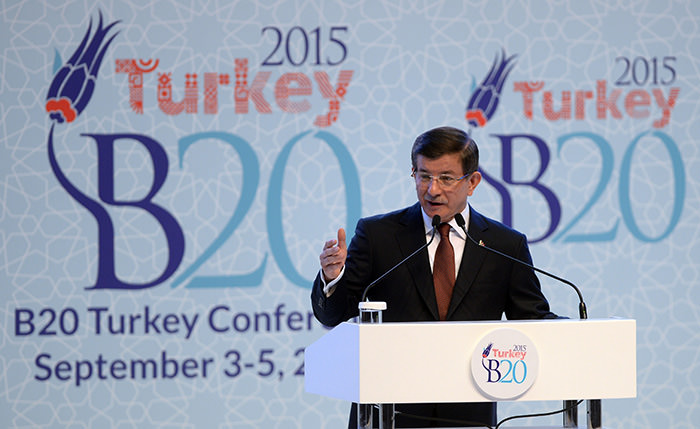 |AA Photo
by Mehmet Çelik Sep 04, 2015 12:00 am
Prime Minister Ahmet Davutoğlu on Friday has called on world leaders to share the responsibility in tackling the Syrian refugee crisis, which has become one of the biggest tragedies in the recent history, during a speech at the B20 Summit in Ankara.

Pointing out the tragedy of refugees drowning in the Mediterranean Sea while trying to reach the shores of European countries, the prime minister invited the guests to reflect on the recent tragedy of the three-year-old Syrian boy Aylan Kurdi, whose photograph was taken on a Turkish beach where his body washed ashore.

"Dear guests, Think for a minute, what would you think if you had lost your entire family. All the world leaders, I want to make an appeal to all intellectuals. Please consider the refugees. This is a test for all of us," PM Davutoğlu said.

The 3-year-old Aylan Kurdi, his 5-year-old brother Galip and mother Rihan died on the same boat on Wednesday, as their refugee carrying boat attempting to cross to the Greek islands from the Turkish coast sank.

The prime minister called on the international community to act immediately on finding a solution to the crisis saying, "The UN should make a decision on how they will protect the Syrian refugees."

Turkey has borne the brunt of the humanitarian fallout from the war in neighboring Syria, taking in around 2 million refugees.

"I am proud to be the prime minister of a country that has hosted more than 2 million refugees," Davutoğlu said and added, "Turkey will continue to open its doors to refugees."

The picture of three-year-old Aylan's little body on the shore became the focus of many international media outlets shortly after the accident, some social media users have also shared images of Aylan and his brother Galip when they were living a peaceful life in Syria.
Last Update: Sep 04, 2015 3:08 pm
RELATED TOPICS