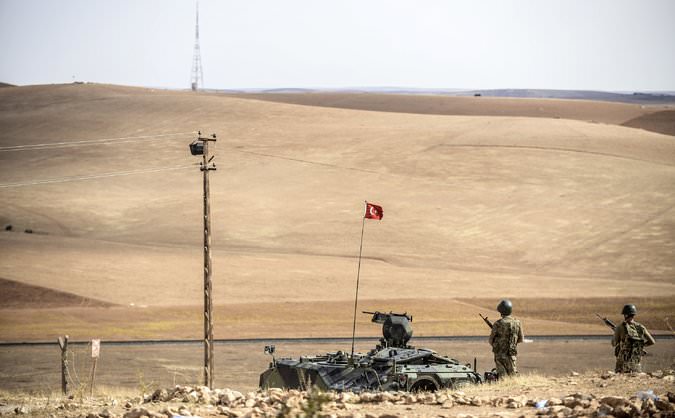 by Mehmet Solmaz Sep 04, 2015 12:00 am
The Parliament on Thursday passed the motion to extend the mandate that allows Turkish military to conduct operations in Iraq and Syria despite Pro-Kurdish Peoples' Democratic Party (HDP) deputies' strong objection, which was supported by the three other parties in Parliament.

The motion extends the mandate allowing the Turkish army for cross border operations against "terrorist threats" and permitting foreign forces to use Turkish territory against the same threats including ISIS, and the PKK, which are listed as a terrorist organization by the U.S., Turkey and EU.

"Armed PKK terror elements continues their existence in Iraq's northern region. It was observed that the number of other terror elements and the threat that they pose has increased significantly in Syria and Iraq ... Turkey which attributes great importance for the territorial integrity, national unity and stability of (our) neighbor Iraq, has to continue its military, political and diplomatic measures and initiatives increasingly against the presence of terrorist groups and the threats they bring in Iraq," the motion read.

The motion was passed as three parties in the parliament, the Justice and Development Party (AK Party), the Republican People's Party (CHP), and the Nationalist Movement Party (MHP) voted in favor of it. The pro-Kurdish Peoples' Democratic Party (HDP) voted against the motion and the arty's Parliamentary Group Chairman İdris Baluken called the motion a "war mandate".

This comes two days after a Turkish soldier was killed by gunfire that came from Islamic State of Iraq and al-Sham- (ISIS) held territory in Syria. Another Turkish soldier was reported missing after the skirmish. The Turkish Armed Forces released a statement saying tanks started to shell ISIS targets in Syria after the attack, and officials have launched an operation to locate the missing soldier.

Turkey recently joined the U.S.-led coalition's air operations against the militant group after solo airstrikes on ISIS targets in Syria.

Following the ministers taking their oaths with a delay, Parliament began to vote on the extension of the mandate. As opposition parties have caused a delay in voting for the mandate by creating a disruption in Parliament, the mandate was scheduled to be ratified late Thursday. The Parliament passed the motion as the voting took place on Thursday evening.

CHP Chairman Kemal Kılıçdaroğlu reportedly said voting against the mandate would be a strategic mistake and would cause a great decrease in votes in the upcoming elections.

The motion to extend the current mandate, which is set to expire on Oct. 2, was submitted by the former cabinet on Aug. 21, citing "increased risks and threats against Turkey's national security along the southern land borders."

Parliament voted on Oct. 2, 2014, to authorize military action in Syria and Iraq to fight any group threatening the country, with the measure to be in effect for one year. "Armed [PKK] terrorist elements continue their presence in northern Iraq. There is also a significant increase in the number of other terrorist elements in Syria and Iraq, as well as the threats they pose," the motion said.

Turkey will take all kinds of necessary measures against terrorist threats and security risks within the framework of international law, it added.

The current mandate allows military incursions into Syria and Iraq against a threat to Turkey and allows foreign forces to use Turkish territory for possible operations against the same threats, including ISIS and the PKK, which is listed as a terrorist organization by the U.S., Turkey and the EU.

Parliament has been on its summer recess since July 14 - expected to end on Oct. 1. Two days ago, deputies from the Justice and Development Party (AK Party), which have the necessary majority needed to call for such a session, called for Thursday's extraordinary session.

The move to extend the mandate followed President Recep Tayyip Erdoğan's call for snap elections, which will be held Nov. 1, after the failure of coalition talks between the country's political parties.

An interim council of ministers was established and announced on Friday by Prime Minister Ahmet Davutoğlu after President Erdoğan told him to form a caretaker government to steer Turkey to a rerun of June's general election.

The mandate allowed the Turkish army in late February to make for the first time a land incursion deep into Syria to re-locate a historic Ottoman tomb.

The terms of the mandate also permits U.S. air forces to use Turkey's İncirlik Air Base to make lethal strikes against ISIS extremists in Syria.

Turkey is waging a dual offensive against ISIS militants and the PKK in Iraq and Syria after a suicide bomb attack in a town on the Syrian border by suspected ISIS militants killed 33 pro-Kurdish activists last month.