US does not support PYD corridor in Syria, ambassador Bass says 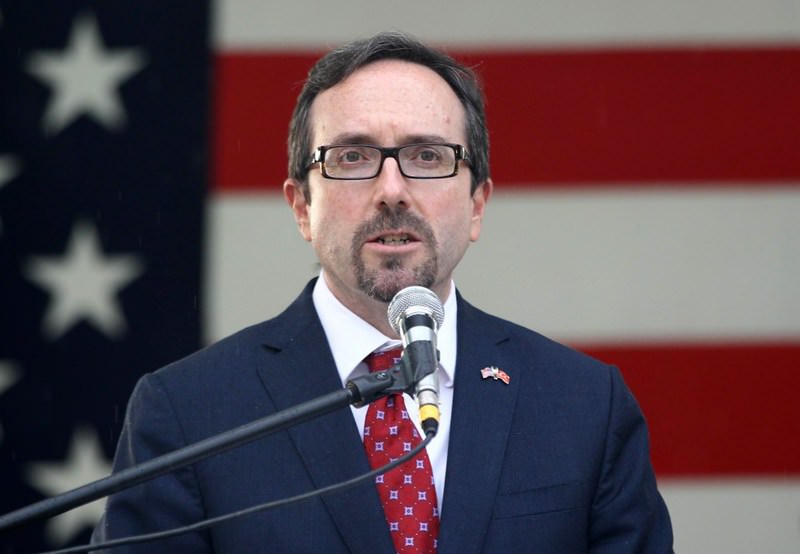 U.S. ambassador to Ankara John Bass said the U.S. has ruled out a Kurdish corridor led by the PYD in northern Syria and emphasized the territorial integrity of the country and a political solution without Assad

U.S. ambassador to Ankara John Bass said on Thursday that the U.S. does not have any intention to create a corridor controlled by the PKK's Syrian wing, the Democratic Union Party (PYD). Bass said in a televised interview that the country supports the territorial integrity of Syria and a solution with a political transition to a government without Syrian President Bashar Assad. "We do not support parties using, capitalizing on, the current conflict in Syria to dismember the country or to create more than one political entity out of that country," he said. Turkey and the U.S. have recently started joint operations to hit ISIS targets in Syria.

Bass did not give any clear answer except reiterating their boundaries for support in the fight against the Islamic State of Iraq and al-Sham (ISIS) when he was asked about the PYD, an actor that the U.S. supports in the region and its intimate relations with PKK. COncerning senior PKK leader Cemil Bayık's statement that the PKK had a contact with the US, John Bass denied such contacts: "No, the United States government is not in dialogue with the PKK."

Bass also underlined the intimate relations and cooperation between Turkey and the U.S. and said: "The two presidents, like the two governments, have a strong, productive, constructive working relationship. They talk to each other when the issues are sufficiently well-developed or when there is a need for them to talk. Just as our respective foreign ministers, our respective finance ministers and many other officials of our government's talk to each other. There is ongoing close coordination between both governments."

Allegations of a Kurdish corridor came following clashes between the PYD's armed People's Protection Units (YPG) and ISIS in Tal Abyad, Syria in June. At that time thousands of Turkmens and Arabs had fled to Şanlıurfa province in Turkey through the Akçakale crossing on the Syrian-Turkish border and claims of ethnic cleansing had been levied on the YPG, which had raised Ankara's concerns about national security. More than a dozen Syrian opposition groups had urged the PKK-affiliated PYD to stop committing "ethnic cleansing" against Arabs and Turkmens in northern Syria.

Columnist İhsan Aktaş said that the balances in the region have changed now although such a plan by PYD by forcing Turkmen and Arab populations to migrate had existed during the clashes in June. "Things will not be the same as before. Turkey has de facto entered the game there with its ISIS-free zone plan. States might prefer to contact non-state actors in critical times, however I think that the U.S. will talk with Turkey more," he said.

The agreement between two countries bore its most tangible fruit last week. On Saturday, the Foreign Ministry said that Turkish jets carried out their first airstrikes as part of the U.S.-led coalition against ISIS in Syria, adding the jets began attacking ISIS targets deemed to be threats to Turkey late Friday across the border in Syria. While officials from the U.S. confirmed the operation, it became the first air attack by Turkey in the anti-ISIS coalition since the country joined the coalition to develop coordinated work with the U.S.

The agreement between the two countries in part allows the U.S. and coalition members to conduct manned and unmanned flights out of İncirlik Air Base in southern Turkey, and for Turkish jets to conduct airstrikes against ISIS. Turkey last month conducted solo airstrikes against ISIS targets inside Syria but the agreement with the U.S. has set a common targeting process that integrates Turkish jets into the coalition force.

Can Acun, an expert on Middle Eastern politics from the Foundation for Political, Economic and Social Research (SETA), said the PYD's whole organizational structure, recruitment and training methods along with ideological base is arranged according to the PKK. "We had seen that PKK militants came and joined the PYD's YPG as the civil war in Syria erupted. Again during the clashes in Kobani [in October 2014], PKK members both from Turkey and [northern Iraq's] Qandil [Mountains] had joined YPG lines. Therefore, there is no difference between them and it is an organization that acts as the PKK's Syrian extension," Acun said.
RELATED TOPICS