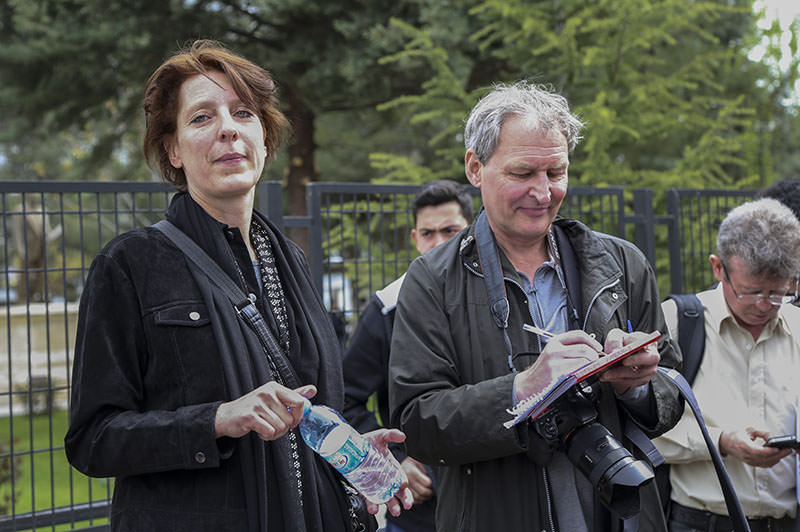 Frederike Geerdink (L), AA photo
by Fatih Şemsettin Işık Sep 06, 2015 12:00 am
On Sunday in the southeastern Hakkari province police officers detained 30 individuals following an intervention against a group with members from the pro-Kurdish Peoples' Democratic Party (HDP) and its fraternal Democratic Regions Party (DBP) who want to be human shields for the PKK, which has been continuing since Aug. 17 to protect them from Turkish military operations.

Those detained were sent to the Yüksekova district gendarmerie general command. A Dutch activist based in southeastern Diyarbakır province, Frederike Geerdink, was reportedly among the detained demonstrators.

"I'm in custody in Yüksekova," she said on her Twitter account, adding that she is to give testimony to a prosecutor. It is expected that she will be on trial for supporting terror and her deportation will remain on the agenda.

Previously she was detained again in January of this year on charges of producing "terrorist propaganda" on behalf of the outlawed PKK terrorist organization and a lawsuit was opened against Geerdink on relevant charges; however she was acquitted of those charges in April by the decision of the Diyarbakır 6th High Criminal Court. Geerdink, known for her previous pro-PKK statements, had been facing a prison term up to five years.

Geerdink, who has been in Turkey since 2006 and has been living in Diyarbakır since 2012, expressed her frustration in the PKK for laying down its arms and continuing negotiations to end the decades-long conflict between the organization and the Turkish state. Geerdink received criticism for supporting the continuation of the existence of a violent terrorist organization. She was accused of attempting to recruit militants for the terrorist organization.

"And the topic that the media seem to get excited about is disarmament … Öcalan, after all, said a few days ago that a solution to the conflict could be reached within months. So, is he preparing for another ground-breaking speech at Nevruz? Will he declare a permanent cease-fire? I'd be disappointed if he did," she wrote, referring to the PKK's jailed leader's earlier call for disarmament.

Authorities have stated that her detention was due to a series of complaints over her alleged support for the terrorist organization.

The PKK is recognized as a terrorist organization by the U.S., EU and Turkey and its terrorist attacks have claimed the lives of 40,000 people since 1983. The terrorist group has escalated its attacks since the June 7 parliamentary elections. The group is targeting infrastructure projects and separately teachers and doctors in the southeast of the country, creating significant anger among civilians. Its efforts to harm the local economy have caused a sharp drop in investments.